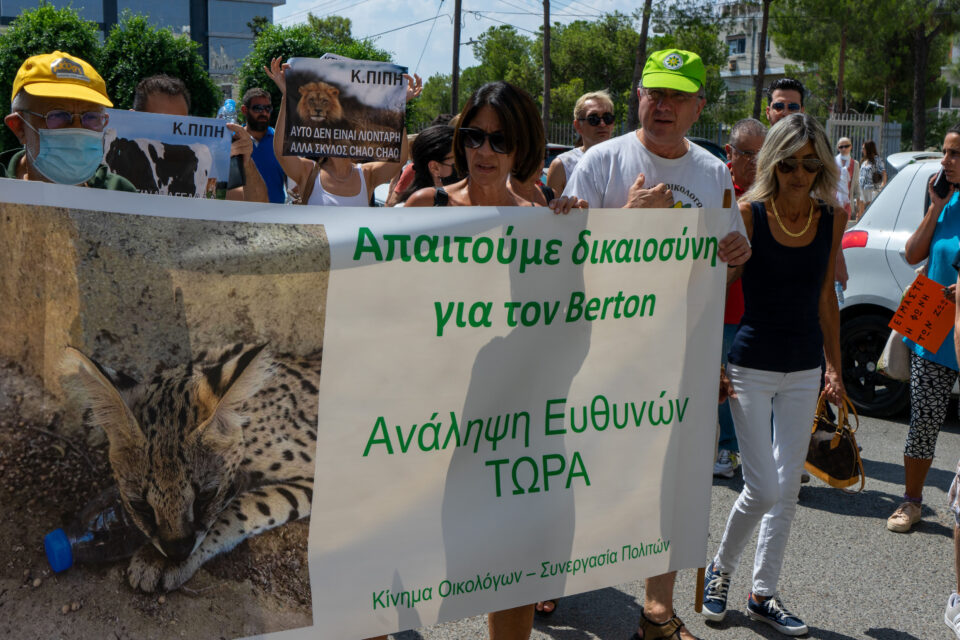 The Green Party, the Animal Party and other demonstrators gathered outside the attorney-general’s attorney’s office on Thursday to protest the death of the savannah cat Berton who died earlier this week while in captivity.

“Veterinary services your hands are stained with blood,” a protest sign read.

Demonstrators called for the resignation of Christodoulos Pipis, director of the state’s veterinary services alleging they were responsible for the death of the animal.

“We believe that responsibility should be attributed to those who either made decisions or were directly involved in this case,” the animal party said.

A letter was handed to the Attorney-general (AG), Giorgos Savvides, who went out to speak with the demonstrators.

“It is something that we are very sensitive about, and I hope we will be able to instill the correct culture in people so they understand that animals require the respect that we ought to be giving them,” Savvides said.

“…Any form of abuse is to be condemned. Complaints about animal abuse will be investigated immediately and effectively. That’s why the Animal Police force was established,” the AG added in a Twitter post after the demonstration.

Berton was handed over to the state’s veterinary services on May 13 by his owner after the animal had attacked a three-year-old boy when it when it escaped its owner’s supervision.

The cat was taken to Limassol zoo where its condition deteriorated. However, it was later reported that the cat had undergone a surgery for a bowel obstruction. After the surgery, on August 1, authorities transferred Berton to Paphos zoo, saying there was a trained person to look after him. However the cat was found dead on Tuesday.

The authorities, aside from investigating the owner’s responsibility over the incident are also looking into whether the animal was legally imported or not and still trying to figure out its actual breed.

Although the cat’s papers say it was a savannah cat, the veterinary services say it was an African serval, a wild animal that was brought in illegally. A savannah cat is a mix of serval and a domestic cat and is legal. Both animals have different temperaments and needs.

The Animal Police are investigating the possibility of criminal offences committed in relation to the death of Berton.

“After consulting with the deputy chief of police Demetris Demetriou and with the AG, police have already begun an investigation into Berton’s death. The investigation is being carried out by the Animal unit,” police said in a Twitter post.

A necropsy on Thursday morning in the presence of a private medical examiner is expected to reveal the exact causes of Berton’s death.