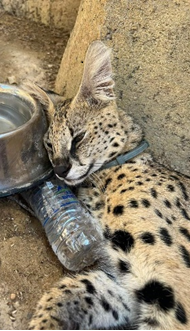 Berton before the surgery in the care of veterinary services

The necropsy carried out on the dead wildcat Berton showed some findings which are being evaluated, police said on Friday, a day after protesting activists alleged the veterinary services were responsible for the cat’s death.

Investigations into the death of the animal, which was under the case of the state veterinary services, continue, Paphos CID chief and spokesman Michalis Nicolaou told the Cyprus News Agency.

He said the findings of the necropsy carried out on Thursday morning at the veterinary services in Nicosia will be evaluated along with additional samples that were taken for further laboratory tests.

Meanwhile, activists had asked for a private specialist to be present during those examinations for transparency purposes.

In a protest outside the attorney general’s office, demonstrators, including members of the Animal and Green party, called for the resignation of Christodoulos Pipis, director of the state veterinary services.

They also handed a letter to attorney-general Giorgos Savvides, who went out to address the protestors.

“Any form of abuse is to be condemned. Complaints about animal abuse will be investigated immediately and effectively. That’s why the animal police force was established,” the attorney-general tweeted after the demonstration.

Berton was handed over to the state’s veterinary services on May 13 by his owner after he had escaped from his owner and allegedly attacked a three-year-old boy.

The cat was taken to Limassol zoo where its condition deteriorated. However, it was later reported that the cat had undergone a surgery for a bowel obstruction. After the surgery, on August 1, authorities transferred Berton to Paphos zoo in Peyia, which was deemed a more suitable place. A week later, the cat was found dead.

The authorities, aside from investigating the owner’s responsibility over the incident, are also looking into whether the animal was legally imported or not and still trying to figure out its actual breed.

Although the cat’s papers say it was a savannah cat, the veterinary services say it was an African serval, a wild animal that was brought in illegally. A savannah cat is a mix of serval and a domestic cat and is legal. Both animals have different temperaments and needs.

The Animal party has claimed that the stress after Berton was taken away from his owner was decisive to his passing.

“We believe the animal had been in so much pain, had been deprived of the love and compassion of [his] caretaker and that lack may have brought about this tragic outcome.”