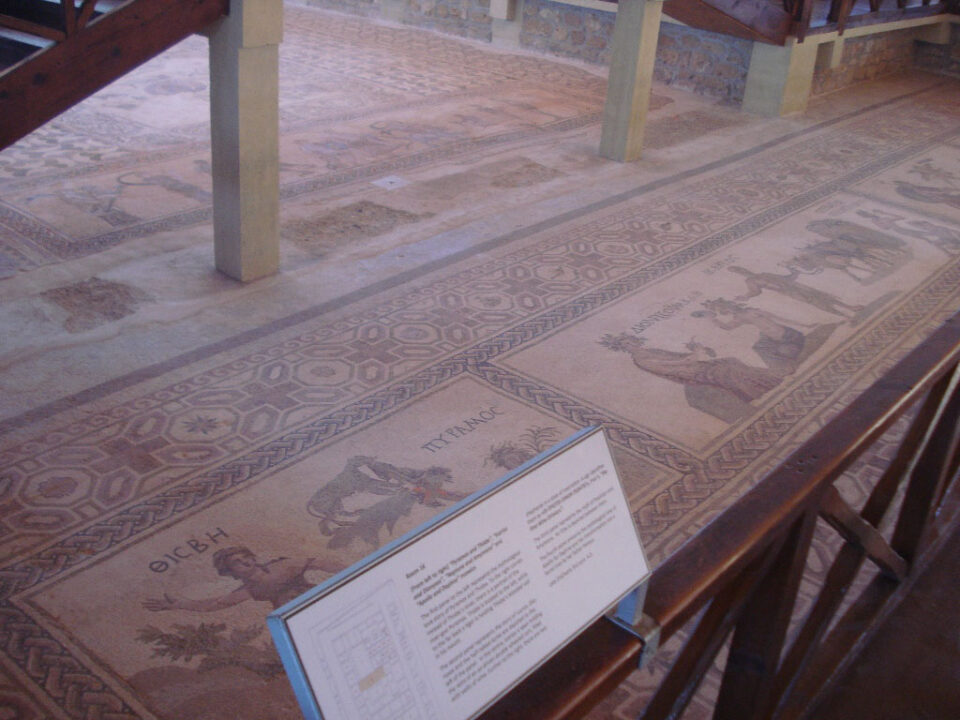 The architectural office of Hugh Broughton Architects has won an international competition to design shelters for the Paphos mosaics after a time-consuming and competitive process, the department of antiquities and the Getty Conservation Institute of the US announced on Thursday.

The competition was launched in autumn 2019 in the framework of the conservation and management plan prepared by the department with the Getty Conservation Institute for the protection of the important archaeological site of Nea Paphos.

The site is known for its exquisite mosaic floors, unique in the eastern Mediterranean, as well as remains and monuments dating to the Hellenistic, Roman, Early Christian, Byzantine, Mediaeval and Ottoman period.

They were asked to prepare proposals with architectural designs (concept designs) for two shelter prototypes.

The first shelter is for the House of Theseus and will cover the mosaics with a scene from the life of Achilles, Theseus and the Minotaur in the Labyrinth and a complex of baths with geometric mosaics.

The second shelter will protect the House of Orpheus and the mosaics with the battle of Hercules and the lion of Nemea, Orpheus and the animals that surround him listening to his music and a smaller complex of baths.

For the needs of the competition, the department and the Getty Conservation Institute, in collaboration with scientists from abroad, experts in conservation issues and protective shelters for archaeological sites, created a detailed design brief.

The brief’s main criteria were the need to protect sensitive archaeological remains from anthropogenic and environmental threats, the importance of maintaining the relationship between the shelters and the surroundings, the creation of the appropriate conditions for viewing the mosaics and facilitating the movement of visitors and the use of sustainable materials and systems.

The architectural offices were also asked to suggest ways to implement their plans in other places and remains of the site, in addition to these two houses.

The architectural offices then visited the archaeological site, in order to understand its special features and needs so as to complete their ideas, discussing with an archaeological officer of the department of antiquities and a scientist specializing in the archaeology of Paphos.

The proposals with the architectural plans were evaluated by an international committee consisting of members of the scientific staff of the department and the Getty Conservation Institute and independent international scientists specialising in the fields of conservation, archaeology, architectural design, structural and environmental engineering, with extensive previous experience in archaeological and historical sites.

The committee was chaired by a professor of practice in the field of historic preservation at the University of Pennsylvania.

In addition to the international committee, the department of antiquities established a special local evaluation committee with representatives of the departments of antiquities and public works, an architect and a civil engineer with experience in similar projects, as well as a professor emeritus of the University of Cyprus specialising in the archaeology of Paphos.

The six offices presented various ideas and responded with creative solutions to the challenge to balance the various and often conflicting design requirements, the announcement said.

“The Commission considered that the proposal submitted by the Hugh Broughton architects office for the creation of a semi-open shelter provided the most comprehensive and balanced answers to the complex criteria set out in the design guide, with priority given to the protection of mosaics,” it said.

The structural design that keeps the interior of the roof intact and the inventive solution for the foundation of the structure without the need to carry out further excavations, minimise the impact of the proposed project on the archaeological site. At the same time, it provides protection from earthquakes, winds and other hazards, it added.

In addition, this proposal is based on an understanding of the general environmental threats to mosaics, such as the creation of salts, and presents solutions for effective control.

The individual elements of the proposal for the shelter prototype, such as the roof and the use of local materials such as clay tiles, wooden elements on the walls and in other places, are consistent with other existing structures within and near the archaeological site.

The proposed shelter does not compete with mosaics and other remains due to the simplicity of its design, while the proposed flexible system with pedestrian bridges allows various options for the development of visitor traffic routes.

The shelters can be expanded or replicated with a solution proposed by the team for the use of “kit of parts”, with materials that are available locally and can be easily replaced, it said.

The proposal will now be finalised and implemented based in governmental procedures, the department of antiquities said.

“The design of shelters on archaeological sites is a complex undertaking that must balance a number of competing demands. Hugh Broughton Architects creative and thoughtful design concept provides protection for the site’s mosaics with structures that are sustainable and sensitive to the archaeological context,” said Jeanne Marie Teutonico of the Getty Conservation Institute.

Hugh Broughton said they were thrilled to have been selected as winners of the design competition.

“We have proposed solutions which minimize physical and visual impact on the site and make best use of sustainable passive design techniques to protect the remarkable Roman mosaics and archaeology,” they said.

“Our designs reflect a creative and methodical collaboration between architects, conservation specialists and engineers, all of whom are looking forward to working in partnership with the department of antiquities and the Getty Conservation Institute to develop proposals to preserve the future of this stunning historic place,” they added.

The Getty Conservation Institute, with which the department of antiquities has been collaborating for many years, focuses on the development of conservation practices for archaeological sites. It supports conservation through scientific research, education, field research and the dissemination of information.