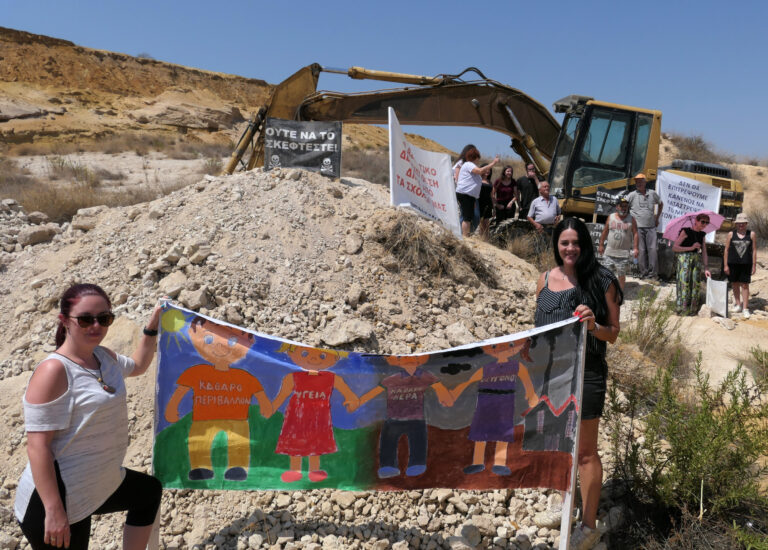 Work was halted at the site after a recent protest (CNA)

The Communities in Action Initiative group, formed to combat the relocation of two asphalt factories to the area of Mitsero have welcomed views by University of Cyprus scientists that the area is already crammed with nuisance industries at a level that is unacceptable.

The group said the scientific assessment proved what they have been saying about the impact on their quality of life, and that, as the UCY team said, the problems that already exist in the area should be alleviated before any relocation takes place.

The new site, they say is only two kilometres from a residential area.

This, and the recent court order suspending work at the site, justifies the position of the residents and gives them a cause for some optimism that it might not go ahead, an announcement said.

“It is a moment when the state should surrender… and launch measures for decontamination, restoration and protection of the natural environment,” it added.

The scientific experts on Friday called for alleviating the current major problem of polluting factories in Mitsero before the scheduled relocation of a Tseri asphalt plant to the area.

Against the backdrop of protests by nearby residents, advisers from the University of Cyprus reiterated their opposition to the move, saying that assessment has shown the existing environmental nuisance in the area is already at “high and unacceptable levels”.

Their announcement came a day after the administrative court issued an injunction halting any work to relocate the asphalt plant to the Mitsero area, pending a hearing on the substance of the dispute. The order was granted following lengthy protests by residents of Mitsero and 11 nearby communities who oppose the relocation using the same argument the experts have made.

Residents living near the factory’s previous location in Tseri, near Dali, had also held numerous demonstrations demanding the suspension of the plant’s operation, citing air and noise pollution.

They are now upset that the relocation hasn’t happened yet while in the meantime, the plant is still operating and have expressed as much in a letter to the president and the attorney-general.

“Under no circumstances will it be tolerated for another school year that so many children suffer because the factories are operating illegally and in violation of a Supreme Court order,” the letter said. They say where it is moved to is not their concern. Last week, the Dali municipality said it did not want to be held hostage to the ongoing dispute. They just want the plant gone.

The cabinet approved the factory’s relocation, along with two other asphalt plants from Tseri and Geri in July 2020. The other two factories will be moved to Kalavasos and Koshi area.