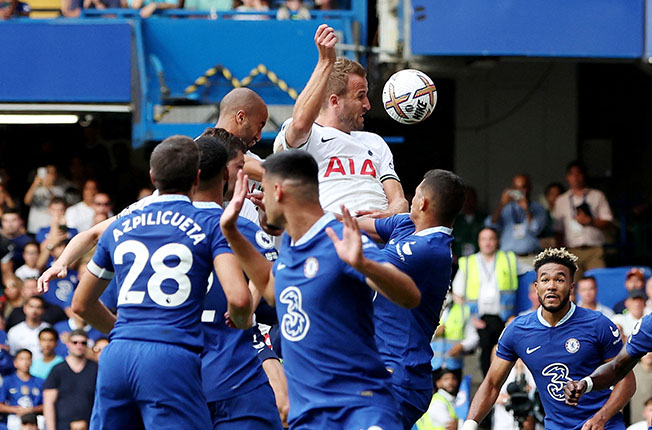 Harry Kane headed in a last-gasp equaliser to earn Tottenham Hotspur a barely-deserved 2-2 draw in a feisty Premier League derby at Chelsea that ended with both managers being shown red cardsafter the final whistle on Sunday.

Kane glanced home Ivan Perisic’s corner in the sixth minute of stoppage time to salvage a point for the visitors who have now won only once in their last 38 visits to Stamford Bridge.

Reece James seemed to have sealed the points for the dominant hosts with a 77th-minute strike after Pierre-Emile Hojbjerg had equalised for Tottenham in the 68th minute.

Centre back Kalidou Koulibaly marked his home debut in style by volleying Chelsea in front from a corner in the 19th minute and the hosts totally dominated the opening period.

Chelsea wasted several chances to increase their lead with Raheem Sterling blazing one great chance over and it was easy to understand Tuchel’s frustration when Hojbjerg levelled.

Tuchel was furious that the goal was allowed, believing Kai Havertz had been fouled in the build-up, and clashed with Conte.

Havertz then spurned a glorious chance to put Chelsea back in front but the hosts did reclaim their lead when the excellent James fired past Hugo Lloris from a pass by Raheem Sterling — a goal that sent Tuchel joyfully racing down the touchline.

Tuchel’s mood darkened though as Kane snatched a draw with his 42nd goal in London derbies — one behind the record of former Arsenal forward Thierry Henry.

The two managers clashed again after an aggressive handshake before being separated by their coaching staff.

Chelsea and Tottenham, who finished third and fourth respectively last season, both have four points from two games.

“I thought when we shake hands you looked in each others’ eyes; he had a different opinion. It was not necessary but a lot of things were not necessary,” Tuchel said.

“We dominated for 90 minutes. We were sharp, we were hungry, it was a top performance. I’m sorry for all my players that we didn’t get the result we deserved.”

Tottenham arrived full of confidence but were second-best for most of the game after allowing Koulibaly the freedom of the penalty area to volley superbly past Lloris.

Conte’s side could not make inroads and Chelsea were faster and sharper, with Mason Mount close to scoring and Ruben Loftus-Cheek inches away from putting in a header before halftime.

It was a similar story after the break with Loftus-Cheek looking poised to score after a storming run into the area, seconds before Sterling blazed over the crossbar.

Kane wasted Tottenham’s best opportunity on a rare counter-attack but Tottenham levelled when Chelsea lost the ball in their area and Hojbjerg drilled a shot inside the post.

Tuchel and Conte were both shown yellow cards for their part in the ensuing touchline melee but it seemed Tuchel would have the last laugh when Chelsea cut through Tottenham’s defence and Sterling played in James to beat Lloris.

It was Tottenham who went home happier though, thanks to Kane.

“Stamford Bridge hasn’t been our best place over the years so to come away with a point especially at the end was a good feeling,” Kane said. “It’s disappointing to see the red cards. Obviously it was an emotional game, London derby, the passion from both sides, both teams wanted to win.”