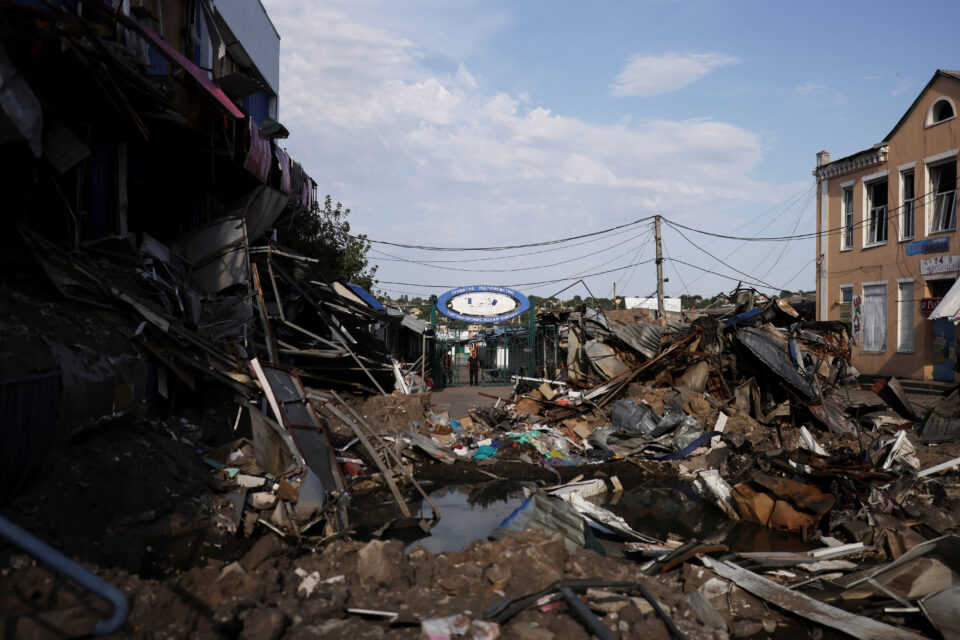 Ukrainian forces reported heavy Russian shelling and attempts to advance on several towns in the eastern region of Donetsk that has become a key focus of the near six-month-old war, but said they had repelled many of the attacks.

The General Staff of Ukraine’s armed forces also reported Russian shelling of over a dozen towns on the southern front – particularly the Kherson region, mainly held by Russian forces but where Ukrainian troops are steadily retaking territory.

Natalia Humeniuk, spokesperson for Ukraine’s southern military command, said on Monday the situation was complicated but under control. “The enemy doesn’t dare advance by land, but fires at the territories in the rear with artillery and rockets,” she told a news briefing.

Asked about Ukraine’s shelling on Sunday of the Antonivskyi Bridge in the Kherson region, she said Ukrainian forces were continuing to fire on routes used by the Russians for supplies.

“Over the past week, we have destroyed more than 10 warehouses. The damage we inflicted makes it impossible to move heavy equipment. There are recorded facts that after we inflicted defeats on command posts, their commanding staff moved to the left bank (of the Dnipro river),” she said.

Much attention has been focused on the Zaporizhzhia nuclear plant in southern Ukraine amid fears of a catastrophe over renewed shelling in recent days that Russia and Ukraine blame on each other.

“The Russians think they can force the world to comply with their conditions by shelling the Zaporizhzhia NPP (nuclear power plant),” Andriy Yermak, chief of the Ukrainian presidential staff, wrote on Twitter. “This will not happen. Instead, our military will punish them by hard hitting with precision on pain points.”

U.N. Secretary-General Antonio Guterres has called for the establishment of a demilitarised zone around Zaporizhzhia and Ukrainian President Volodymyr Zelenskiy has warned Russian soldiers who shoot at Europe’s largest nuclear power station or use it as a base to shoot from that they will become a “special target” of Ukrainian forces.

The Zaporizhzhia plant dominates the south bank of a vast reservoir on the Dnipro River. Ukrainian forces controlling the towns and cities on the opposite bank have come under intense bombardment from the Russian-held side. Read full story

The International Atomic Energy Agency (IAEA), which seeks access to the plant, has warned of a nuclear disaster unless fighting stops. Nuclear experts fear fighting might damage the plant’s spent fuel pools or reactors.

A spokeswoman for Russia’s foreign ministry said on Monday it would do all it could to allow IAEA specialists to visit the plant.Read full story

“In close cooperation with the agency and its leadership, we will do everything necessary for the IAEA specialists to be at the station and give a truthful assessment of the destructive actions of the Ukrainian side,” spokeswoman Maria Zakharova said.

Ukraine, where parliament on Monday extended martial law for a further three months, has said for weeks it is planning a counteroffensive to recapture Zaporizhzhia and neighbouring Kherson province, the largest part of the territory Russia seized after its Feb. 24 invasion and still holds.

In the Russian-occupied region of Luhansk, in the grounds below an abandoned, charred apartment block, Lilia Ai-Talatini, 48, watched as her mother’s body was exhumed from a makeshift grave to be taken to a cemetery for a proper burial.

Ai-Talatini told Reuters how it had taken her 10 days to reach her parents’ apartment, which was on the Russian-held side of the town of Rubizhne, during heavy fighting there in March.

“Mother was already dying … her hands were blue, her complexion was sallow, there were circles under her eyes,” she said. “The next day mother passed away.”

An official with the Luhansk People’s Republic, a statelet set up by pro-Moscow separatist forces, said a team had been working in Rubizhne for 10 days and exhumed 104 sets of remains.

“It’s clear that shrapnel wounds predominate, but there are also bullet wounds,” Anna Soroka said, estimating there were 500 unofficial graves in the city.

Reuters could not independently verify the battlefield accounts.

Russia calls its invasion of Ukraine a “special military operation” to demilitarise its smaller neighbour and protect Russian-speaking communities. Ukraine and Western backers accuse Moscow of waging an imperial-style war of conquest.

The conflict has pushed Moscow-Washington relations to a low point, with Russia warning it may sever them.

Russian President Vladimir Putin said on Monday that Moscow was ready to offer modern weapons to its allies. He used a speech at an arms show near Moscow to boast of Russia’s advanced weapons capabilities.

“(We) are ready to offer our allies the most modern types of weapons, from small arms to armoured vehicles and artillery to combat aviation and unmanned aerial vehicles,” Putin said at the opening ceremony of the “Army-2022” forum.

“Almost all of them have been used more than once in real combat operations.” Read full story

But Putin’s military has performed worse than expected in Ukraine. Having been beaten back from Ukraine’s two biggest cities and making slow headway, at heavy cost, in the east of the country, the war has so far not proved to be a convincing showcase for Russia’s arms industry.