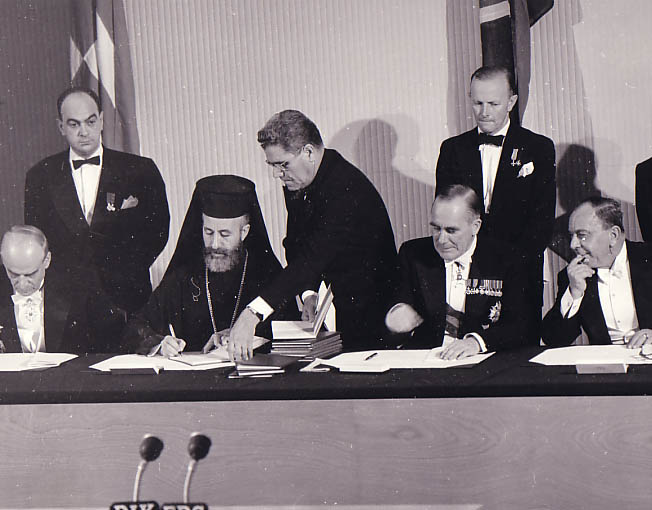 Signing Of Declaration Of Independence August 1960

Historical revisionism and misrepresentation of facts were what Turkey did best, Cyprus’ permanent representative at the UN Andreas Hadjichrysanthou said in a letter addressed to the UN Secretary-General, responding to a letter sent by his Turkish counterpart Feridun Sinirlioglu.

Sinirlioglu in his letter to the UNSG, dated May 19, 2022  had said that the Republic of Cyprus “was established in 1960 on the basis of partnership between the two peoples of the island, namely Turkish Cypriots and Greek Cypriots” and it “ceased to exist when the Turkish Cypriots were forcibly expelled from it in 1963.” Negotiations for a settlement to the Cyprus problem had failed for more than 50 years because of the “emphatic rejection of the Greek Cypriot side to share power and wealth with the Turkish Cypriot side,” he wrote.

In response, Hadjichrysanthou said that Cyprus had emerged into statehood as a unitary state “with one people, the Cypriot people, irrespective of ethnic origin.”

“The subsequent portrayal of one of Cyprus’ ethnic communities as a people, in order to claim a separate right to self-determination, is not only legally invalid as ex post facto, it has no basis in historical reality,” Hadjichrysanthou said in his letter.

He further explained that such a claim was part of Turkey’s arguments aimed at safeguarding its own strategic interests on the island.

“Clearly such a fabrication is nothing more than a political tool, used by the kindred state of the ethnic community in question, to invent an excuse for secession, because this is what is dictated by its own strategic interests,” wrote to Hadjichrysanthou.

He also clarified that in 1963, Turkish Cypriots had unilaterally walked away from state institutions after encouragement by Turkey.

“Equally false is presenting the unilateral withdrawal of Turkish Cypriots from State institutions in 1963 as anything other than a strategic move forced by Turkey in order to seek the partition of Cyprus,” he said.

He cited 1964 UN reports pointing towards such a policy direction.

“The lack of movement by Turkish Cypriots outside of their areas is believed also to be dictated by a political purpose, namely, to reinforce the claim that the two communities of Cyprus cannot live peacefully together in the island without some sort of geographical separation,” the 1964 UN report on the Operation in Cyprus had asserted.

Hadjichrysanthou also called Turkey’s understanding of the settlement efforts “contrived”, attributing the talks deadlock to “his (Sinirlioglu) country’s demand for the recognition and legitimization of the secessionist entity it established through the unlawful use of force against Cyprus.”

Lastly, he reiterated that Cyprus could not be divided for any reason and on any grounds “including those fabricated by a powerful neighbour who wishes that Cyprus did not exist as a State in its own right and only as its puppet state and as a stepping-stone for controlling the eastern Mediterranean.”