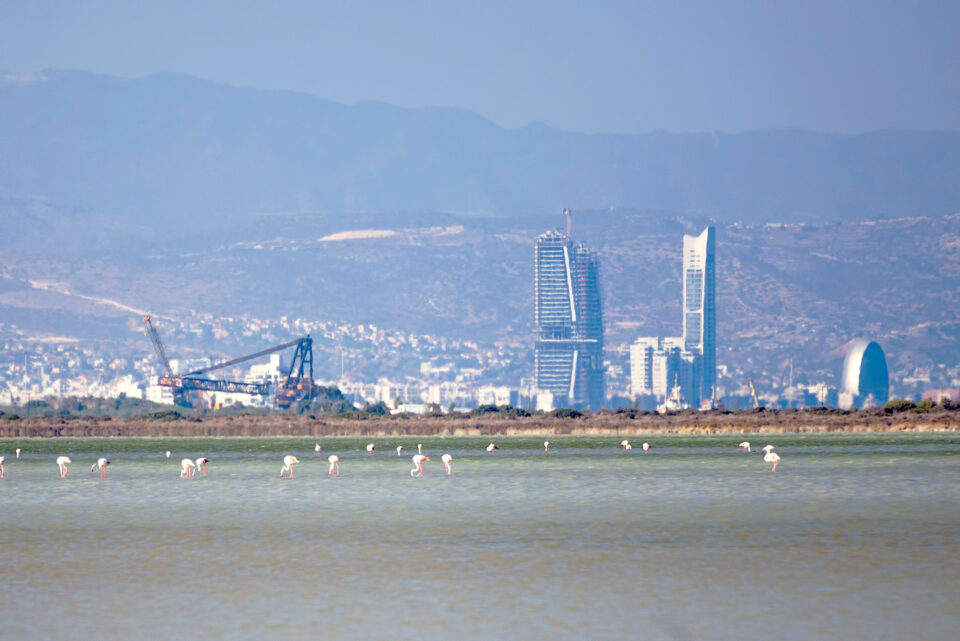 Following the red flags recently raised over the environmental dangers from ongoing construction in the Akrotiri salt lake area, the environment department announced that a new study into rainwater impact management on developments has been prepared.

In addition, the department highlighted that the problem of draining groundwater observed at the nearby casino-hotel project is important but also transient in terms of rainwater management.

“The impact resulting out of the irrational and piecemeal management of rainwater is multi-leveled and pertains to flooding risks as well as to changes in the quantity and quality of water that ends up in the salt lake’s southern downstream, potentially negatively impacting the ecosystem and leading to the development of unwanted insect populations,” the environment department said in its announcement on Wednesday.

“It resulted out of the cementing of large areas because of the big new developments in the area,” it added.

The new study concluded that specific infrastructure developments and measures must be imposed by the licensing authorities, so they are taken into consideration by both local authorities (department of public works and Limassol municipality) and private investors as well.

The responsibility for implementing the study’s measures falls on Limassol municipality and the public works department, the environment department stressed.

It was requested that the study considered the quantity and quality of water being channeled into the salt lake, its impact and recommendations towards their processing, optimisation of their channeling, mitigation of their impact on the area’s ecology and subsequent monitoring.

The measures necessitated by the study’s findings pertain to managing water within the plots under development on the one hand, and on the other channeling it into the Salt Lake in ways that ensure the quality of water, and also ensure that the water does not end up in just one place within the lake.

The idea of channelling rainwater into the sea was also put on the table but was rejected by the Fisheries Department.

The holistic rainwater study was prepared by the ministry of transport with the environment department being in full agreement with its conclusions.

As far as the groundwater drainage observed at the casino-hotel development is concerned, the environment department said that it was the result of the area’s aquifer being especially elevated.

While a study evaluating the development had made allowances to avoid the elevated aquifer, and the developers themselves had made no designs for underground spaces to avoid potential water emergence, waters nevertheless did emerge.

The department had then imposed mitigating measures requiring the developer to also construct a sediment settling tank channeling drainage waters into wells within their plot.

And importantly, there has been no channeling of drained waters into Akrotiri salt lake, according to the environment department.

As far as future developments in the area are concerned, the department urges not to dig underground spaces to avoid the need for managing large quantities of drained water. In cases where such a need is unavoidable, then a drainage water management must take place within the plot of land on which the development is taking place.

The department also pointed out that the urban planning zones of Akrotiri area are governed by the provisions of the Limassol Local Plan 2013 and the 2021 Policy Statement by the British bases. More specifically, the wider area north of the Akrotiri salt lake falls under the Republic of Cyprus and has been included in residential and tourist zones for decades, even though there was no intense development taking place there.

Akrotiri salt lake on the other hand, is situated within the grounds of the British bases where a different urban planning regime applies and is also governed by the Ramsar Treaty.

Lastly, the department referring to criticisms over the piecemeal nature of the Strategic Environmental Impact studies, said that “it should be carried out by the Department of Town Planning and Housing in the context of the revised Limassol Local Plan for which the process is already under way” while noting that an assessment for the British bases has already been carried out in 2021.