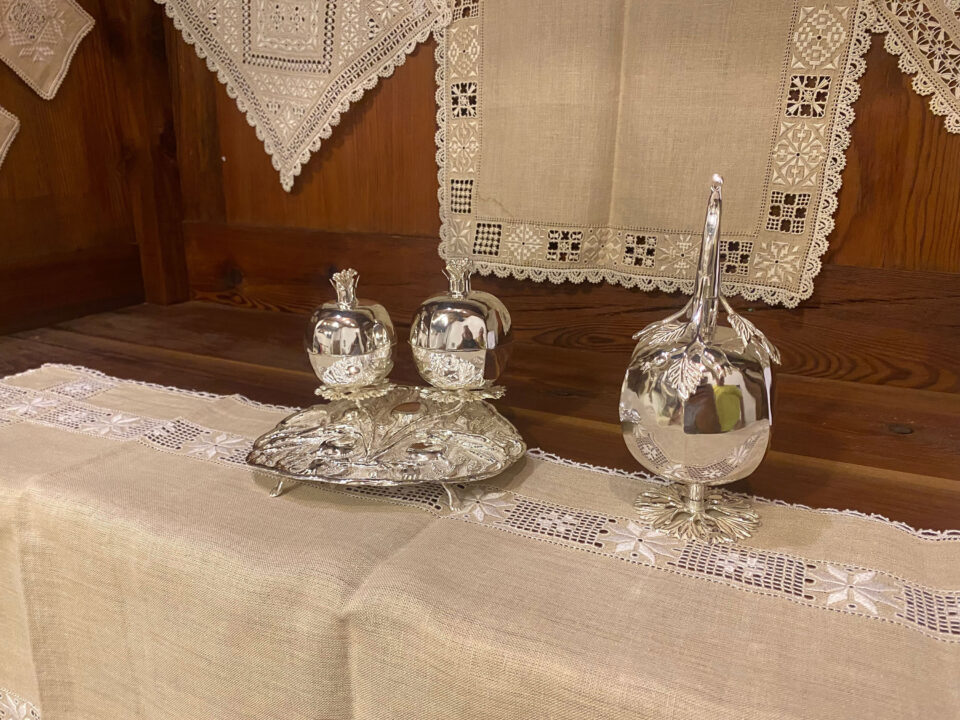 The dying art of Lefkara lacemaking, famed to have been depicted in Leonardo da Vinci’s  painting ‘The Last Supper’ is in desperate need of local support if the village’s traditional handicrafts and unique architectural character are to survive the passage of time.

The Mayor of Lefkara, Sophocles Sophocleous is appealing to the government and the state to support the cultural heritage of Lefkara, namely its architecture, silversmithing and lacemaking, adding that lefkaritiko embroidery has been standardised and certified.

Sophocleous invited people who own Lefkara lace to have their pieces authenticated at the village’s certification centre.

“The cultural creation and heritage of Lefkara must not only be kept alive but strengthened in order to pass it on, as we received it  from our ancestors, to the next generations. Our goal is to develop it and pass it on to our children and grandchildren who in turn will pass it on to their own children,” Sophocleous told CNA.

According to the mayor, there are three important aspects unique to the culture of Lefkara. These are the mountain village’s architecture, its famous silversmithing with the well-known silver incense burners popularly used at wedding blessings, and the most important trademark that exists in Cyprus after halloumi cheese, that of lace embroidery.

Sophocleous said he wants the government to simplify the incentives offered to locals, the municipality and other local services in an effort to encourage preservation of these unique cultural arts which are rapidly dying as the younger generations opt for more mainstream professions, he said.

“Today in Lefkara there are 555 houses that are listed, while another 35 are monuments,” the mayor said.

“The government as well as the local authority must and should address the issue of dangerous buildings, an issue that needs to be addressed holistically. The time has now come to also give incentives and support this uniqueness called Lefkara silversmithing since there are no longer any craftsmen to continue the art,” he added.

Sophocleous urged the government and the state in general to listen to the demands of decades and support the dwindling number of artisans that remain.

Returning to the topic of lace embroidery, Sophocleous said that more should be done on an official diplomatic level by the state to promote it as it’s an art form Leonardo da Vinci was so impressed with during a visit to Cyprus in 1481, that according to local legend, he took some back with him as a gift for the Cathedral of Milan.

“What foreign policy often does not manage to do, was achieved to a very small extent with the Lefkaritiko embroidery, which has travelled to all the countries of the world and entered many homes even of people who determine the fortunes and policies of states. Lefkaritiko embroidery is the most important thing in Cyprus in terms of art,” said Sophocleous.

In the coming months, together with the certification centre, Sophocleous said a large campaign would be launched, during which certified Lefkara lace would be given symbolically as gifts to the president, party leaders and other state officials in an effort to breathe new life into a unique form of cultural heritage.

In the meantime, Sophocleous called on “all Cypriots who have pieces of the lace stored in their cupboards to take them to the certification centre to receive an official seal.

“I believe that this will be the beginning of the increase in the marketing of embroidery but at the same time it will be an effort to motivate young girls to keep alive this cultural heritage of Lefkaritiko embroidery,” Sophocleous said.