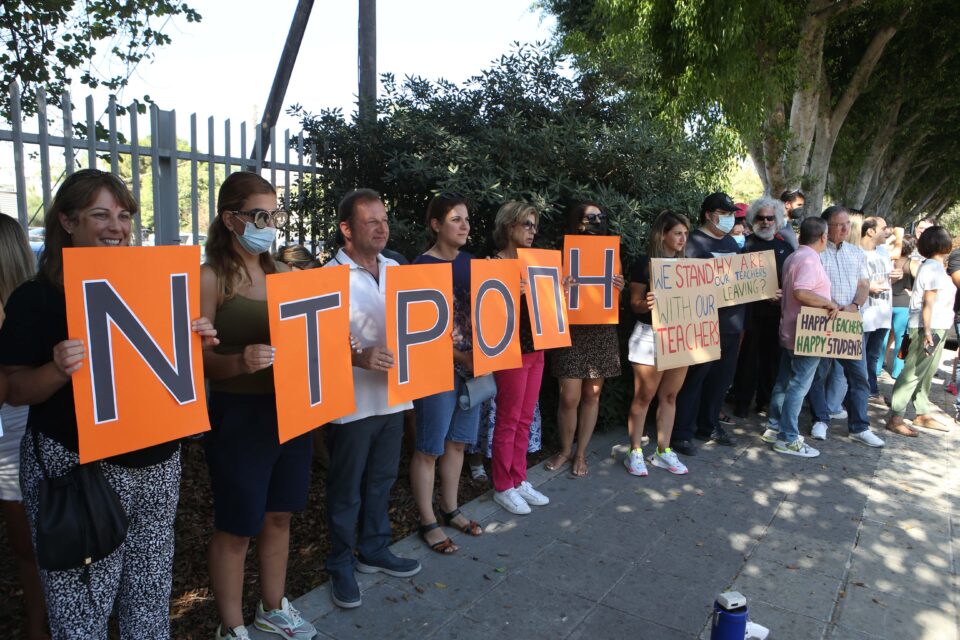 English School staff threatened to strike on Wednesday over the decision to dismiss three unionised teachers as the education ministry called on the school board and employees to come to an agreement before the approaching academic year.

The lawyer of the English School staff union (ESSA) Stavros Stavrianides announced the escalation of measures by the private school’s teachers during an urgent meeting of the House education committee, while ESSA members were protesting outside the parliament.

Tempers flared at the session, which aimed to look at the legal framework governing the English School and the obligations derived from it, as well as the complaints launched against the school by staff union (ESSA) regarding what they call arbitrary layoffs.

Stavrianides claimed the dismissals clearly concerned the teachers’ involvement in the union, adding that the specific staff had been targeted long ago.

In response, the board of directors of the school insisted the layoffs were based on internal regulations and the school’s code of conduct and were not due to the teachers’ union activity.

On behalf of the education ministry, George Koutsides called on both sides to come to an agreement because September is fast approaching, and the school year should run smoothly for students and teachers.

Meanwhile, MPs reiterated their calls on President Nicos Anastasiades to intervene in the dismissals.

On behalf of the presidency, the head of the Secretariat of the Presidency of the Republic Pantelis Pantelides questioned whether it is institutionally correct for the president to intervene by annulling a decision of the board of directors of a private school. He also expressed regret that a previous dialogue that had been initiated through the labour ministry on the issue did not come to fruition.

However, the auditor-general, Odysseas Michaelides, disagreed with this position saying the cabinet acts as a trustee of the English School’s property. He explained that the board of the English School is appointed by the council of ministers, which can remove it at will.

Even though legally, the English School is considered a private secondary school since 2007, it is still regulated by a special legislation dictating its management and maintenance are responsibilities of the state. This also means that part of its budget comes from state funding.

The English School might not be a legal person under public law, but that does not mean the Republic has no say in it, Michaelides said.

The audit office, he added, has investigated the issue of state funding of the English School and found that £35,000 had been given as financial aid in 1981, £3,000 for renting a building, and the education ministry had taken responsibility for the maintenance of the school.

Since 2003, the AG said, the annual state subsidy received by the English School had increased to €340,000, while in 2003 there was a budget of €2.1 million for maintenance of the building facilities at the school. On top of that, the school receives some other sponsorships under a fund allocated to all private schools. Meanwhile, Michaelides said, the English School is included in the consolidated financial statements of the state prepared by the general accounting office.

For her part, ombudswoman Maria Stylianou-Lottides said she had received complaints from the dismissed teachers about the possibility of intimidation by the principal of the English School.

But due to the private status of the school, she said, she could only intervene if the harassment related to the complainants’ gender, while only the labour court had jurisdiction over irregularities and procedural issues or whether the punishment was proportionate.

One of the three teachers who received letters informing them of the decision to dismiss them, Myrto Hassapopoulou, was suspended last year for using the school system to send unauthorised correspondence to parents.

Another teacher who received a dismissal letter after the school closed for the summer, Marienta Stephanou, said the teachers never disobeyed the principal’s recommendations on the operation of the school.

The legal representative of the English School board, Giorgos Georgiou, said the school has a disciplinary code and code of conduct and in this case internal procedures were fully followed.

He clarified that there was no targeting or intention of targeting any employee in the context of union action, which is prohibited and the English School fully honours this. He referred to letters from the department of labour stating that all procedures were followed and said that the attorney general also ruled that union law was not violated.

Georgiou added that the status of the school as private was ratified by a court decision. While by law the English School’s real estate is vested in the Council of Ministers, the board is responsible for the management and control of the school.

The three complainants had complained of intimidation by the school principal, the legal representative said, however there had been no evidence.

He also said that union membership at the English School is permissible and should be promoted, but it is not a ticket to promiscuity. The matter is heading to court based on the letter received from the complainants, Georgiou said, adding that it is difficult to refer to matters that will be decided in court.

Speaking after the session, the chairman of the committee, Diko MP, Pavlos Mylonas, said the committee will continue its efforts and where necessary, legislative changes will be made to address the weaknesses observed and to ensure that there are no more authoritarian attitudes towards any trade unionist, teacher or other worker.