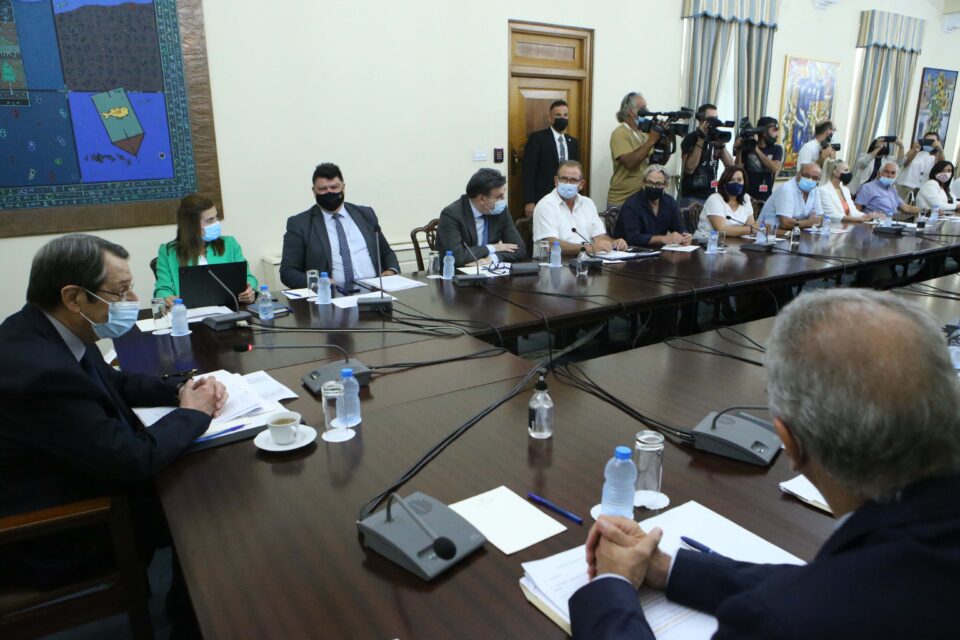 The meeting on Friday with the Vasiliko communities (Photo: Christos Theodorides)

Vasiliko and Mitsero area community leaders have agreed to allow the government an extension until October to come up with a solutions to the controversial relocation of asphalt plants to their area.

Despite separate “constructive meetings” between community leaders and President Nicos Anastasiades on Friday it was clear that the issue is likely to persist as the matter of relocation has not been resolved and the government has not pledged to rescind its decision. However it seems they have agreed to some steps to mitigate the problems being experienced by residents pending a final decision.

The relocation of the asphalt factories was decided following a cabinet decision in 2020 to move three plants from the Tseri and Geri (Dali) area. These are expected to be relocated to the Mitsero, Kalavasos and Koshi areas, affecting numerous communities in the Vasiliko and Mitsero areas.

“We had a constructive meeting at the presidential palace. We have received positive results on five out of the seven demands we had,” the president of the coordination committee of the nine Vassilikos communities and the Kalavasos community leader Lefteris Foka told CNA on Friday.

“Regarding the issue of the industrial zone close to the Zygi residential area and the installation of the asphalt plant we are not satisfied. We were expecting that today we would have some sort of a result, but we will provide time until October to see if we can get positive results,” Foka added.

For his part, the leader of the Mitsero community, Andreas Kyriacou, said they felt vindicated “for our persistence”, that the president listened to them.

“The president, after listening to us, committed to solving the existing nuisance activities and problems plaguing the region in order to restore trust, which as the president himself admitted, has been lost between the people and the state,” he said.

Kyriacou said however that they would not back down on refusing to have the plant in their area and would only be willing to discuss it once the issues related to the other nuisance industries they have to put up with were alleviated.

Asked about deadlines, Kyriacou said the president himself had set a timetable of around a month for the next meeting.

Following both meetings, Agriculture Minister Costas Kadis said that in both instances it was found that certain industries “do not operate in the most appropriate manner and create problems for the communities.”

“What we heard from the communities is justified, as is the anxiety and uncertainty,” he said.

“These issues are not from yesterday. They are thirty years old. They have accumulated and these hot potatoes have reached the hands of the current government that wants to deal with them at their root. That’s why a meeting was held with the president,” Kadis added.

He said that until recently, an asphalt plant could be installed somewhere without an environmental impact study but there was legislation coming into effect which sets a much stricter framework.

Kadis said that is why monitoring committees would be set up with the affected communities as well as hiring special inspectors specifically to check on industries in these two areas. One of the complaints after the recent fire at a tyre recycling unit in the Vasiliko area was that there were not enough labour inspectors to monitor all of the industries islandwide on a regular enough basis.

“So, we will work with the technical advisor of the communities, we will come with specific recommendations within the next month for specific actions to address the existing issues and problems that concern the area and regarding the possible installation of asphalt plants,” Kadis said.

“There will be a much more systematic surveillance of what is happening. This will be done in the coming period”, added.

During the coming period, the government will also consider some alternative proposals submitted by the representatives of the communities, regarding either the siting of industrial units, or the way the industries operate in the region.

Foka, referring to some of the suggestions, said the upgrading of factories and their compliance with environmental rules were necessary to their operation. “This will be done by an inspection from a qualified individual hired by the state. The committee that will audit them, a community leader will also be participating,” Foka noted.

“We will have a new meeting in early October and after the president has considered the proposal on the issue of the asphalt plant -which we are opposed to and will not accept it in our area- to find an alternative area to house it,” Fokas said.

“Thus far they [the government] did not accept the alternative proposal to find another area. At this moment they are discussing it. The town planning department and ministry of agriculture will undertake to find new areas and we will discuss it at the next meeting, early October.”