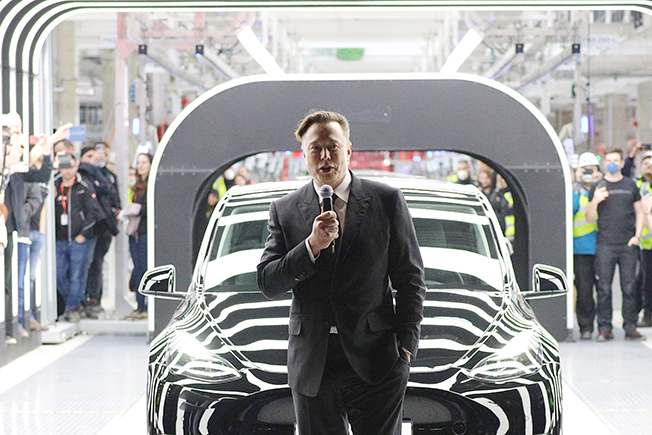 Tesla Inc (TSLA.O) Chief Executive Elon Musk has set his young company on an aggressive expansion path like no other auto executive has dreamed – but one riddled with potholes and road blocks that could stall or sidetrack the journey.

Musk’s audacious goal of selling 20 million electric vehicles in 2030 is at the centre of the company’s growth promise for shareholders and its pledge to drive the adoption of sustainable energy. If achieved, it would make Tesla twice the size of any automaker in history, accounting for roughly 20 per cent of the global vehicle market.

But such exponential growth – a 13-fold increase over the estimated 1.5 million vehicles it hopes to sell this year – will come at an unprecedented cost of hundreds of billions of dollars, according to a Reuters analysis of Tesla’s financial disclosures and forecasts for global electric vehicle demand, EV battery and battery mineral production.

“I’d equate this with the Manhattan Project in World War Two,” said manufacturing expert Michael Tracy of The Agile Group, referring to the sweeping effort by the United States to build an atomic bomb.

Musk’s vision poses staggering challenges to the 19-year-old Texas-based automaker, not the least of which is securing enough batteries and critical raw materials such as lithium and nickel to supply 20 million vehicles.

Tesla has been a disruptor, but this next phase of growth, if achieved, would go beyond disruption to fundamentally remake the global auto industry as well as the mining and trade of battery materials.

Along the way, Tesla would need to build seven or eight more “gigafactories” – an average of one every 12 months or so – take share from every competitor and emerge as a company the size of Volkswagen AG (VOWG_p.DE) and Toyota Motor Corp (7203.T) combined. It would also need about 30 times as much battery capacity to supply all of its vehicle factories.

The price tag will be steep: Tesla could spend an estimated $400 billion or more over the next eight years to build new vehicle assembly and battery plants around the globe, and another $200 billion or more to build or buy the batteries, including the cost of the raw materials.

Canada, Indonesia, India and other governments are already lobbying to win Tesla’s next investment in EV production, an announcement Musk has said could come by the end of the year.

Producing 20 million vehicles a year would require Tesla to expand both its own battery-making capacity, and the capacity of its battery partners and the raw materials producers that supply them.

“Long-term, we’re expecting to make on the order of 3,000 gigawatt hours or 3 terawatt hours per year,” Musk told investors in July. “I think we’ve got a good chance of achieving this actually before 2030, but I’m highly confident that we could do it by 2030.”

That is four times as much lithium and nickel, twice as much cobalt and seven times as much graphite as the entire EV industry expects to consume in 2022.

Tesla did not respond to a detailed request for comment.

The automaker, which rarely discloses its supplier relationships, began signing offtake agreements with miners and refiners more than a decade ago, according to former Tesla executives interviewed by Reuters, and currently has deals with more than 20 materials suppliers around the globe.

Mike Tracy is sceptical of Musk’s ability to develop a global manufacturing juggernaut over the next eight years with nearly double the production capacity of Toyota, currently the world’s largest automaker by volume.

“That would be an extraordinary achievement, considering it’s taken Toyota decades to build that capability,” he said.