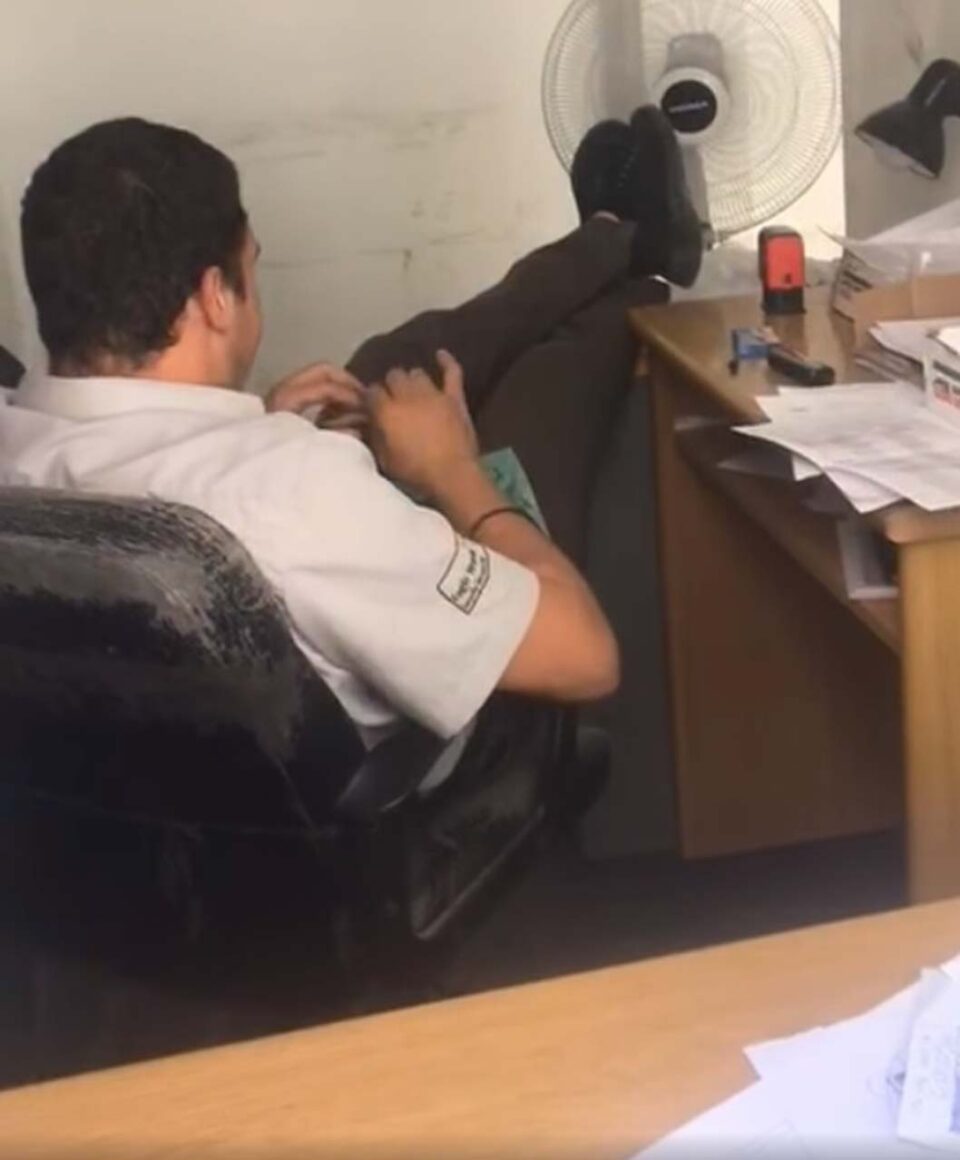 Just days after a video clip went viral showing a female asylum seeker being hit by a man said to be her landlord, a new clip which appeared to show a social welfare security guard ignoring the pleas of the same woman and her crying baby during a previous incident, is currently making the rounds.

The foreign woman in the video asks a man sitting eating with his feet on his desk and his back half turned to the counter window whether someone ‘she’ is coming with an answer as if she has been waiting for an official to come speak to her or for someone to let her into the building. The incident was recorded in Limassol.

“Excuse me, my baby is sick…is need for the water…now you see, my baby very too much is crying…excuse me sir I is speaking with you….” The woman is heard saying on the clip.

The man, who looks like a security guard, continues eating and ignoring her. She tells him “Yeh I am speaking with you, my baby is sick, I need for the water.”

The man can then be heard using an obscene phrase in the Cypriot dialect.

The woman responds: “Maybe what time is [she] coming? This is polite? You think this is polite you don’t answer with me, you (have) your back for me? My baby is sick”.

The guard then proceeds to finish his sandwich, gets up and closes and locks the windows in the woman’s face.

This latest clip, like the first one, was posted by migrant support NGO Kisa on its Facebook page, which had also released the first video of the woman being beaten.

A man aged 76 and his wife, also 76, had a case registered against them at the Limassol court on Thursday after being arrested in connection with an attack on the woman who was renting from them, which was captured on video.

Police late Wednesday had arrested the couple after a video went viral showing a man hitting a woman who is allegedly a tenant renting  the ground floor part of a two-storey dwelling in Polemidia, Limassol. The tenant was later identified as an Iranian asylum seeker aged 40 with a three-year-old child.

According to police sources, the incident occurred at noon on Wednesday.

Deputy minister of social protection, Anastasia Anthousi, had said on Thursday after publication of the first video, that her department was doing its job after they were criticised for not doing enough for the woman in question following the release of the first video.

“We hope the deputy minister will call the victim and hear her out and apologise before she issues her next announcement,” Kisa stated in a post.

Social welfare staff visited the injured woman in hospital on Friday, Anthousi said in a written statement, which reiterated her condemnation of all forms of violence against any person.

“Regarding the recent incident of violence against a foreign mother, in the exercise of their duties, officers of the social welfare services visited this woman again today in the hospital, in an effort to find the best solution for her, but especially for her child, so that they can live in safe conditions. The officers reiterated the position of the welfare services that it is in the best interests and safety of the child to find another place to stay in suitable living conditions,” Anthousi said.

“The applicant accepted the proposed settlement and after her dismissal from the hospital, she will be transferred,” the deputy minister’s statement read.

Addressing the second video exposing the rude behaviour of the security guard, Anthousi said the employee was not directly affiliated with social welfare services.

“I declare that such behaviours are not acceptable to any citizen,” Anthousi said, adding that actions had already been initiated to take corrective measures, not excluding the termination of the employees’ contract in case of non-compliance of the contractor.