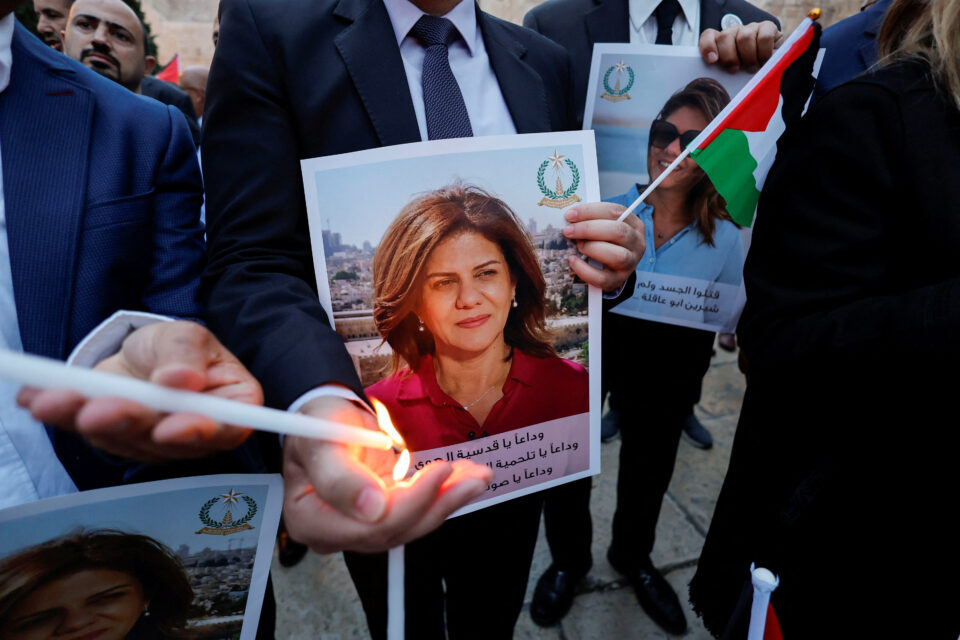 FILE PHOTO: People light candles during a vigil in memory of Al Jazeera journalist Shireen Abu Akleh, who was killed during an Israeli raid, outside the Church of the Nativity in Bethlehem, in the Israeli-occupied West Bank, May 16, 2022

Israeli investigations into the killing of Al Jazeera journalist Shireen Abu Akleh in May concluded that she was likely to have been unintentionally shot by an Israeli soldier but was not deliberately targeted, the military said on Monday.

Abu Akleh, a U.S.-Palestinian citizen, was shot dead on May 11 while covering an Israeli military operation in the volatile town of Jenin in the occupied West Bank in circumstances that remain heavily disputed.

The Israeli military says that troops conducting operations in Jenin had come under heavy fire from all sides and had fired back, including towards the area where Abu Akleh was standing about 200 metres from their position, but that they had not been able to identify her as a journalist.

It said “there is a high possibility that Ms. Abu Akleh was accidentally hit by IDF (Israel Defense Forces) gunfire that was fired toward suspects identified as armed Palestinian gunmen”. It said it was also possible that she was hit by Palestinian gunmen.

One of the most recognizable faces reporting on the Israeli-Palestinian conflict for two decades, Abu Akleh’s death triggered outrage across the world, particularly after police beat mourners at her funeral in Jerusalem.

Other witness accounts of the incident have disputed that Israeli positions were under fire from the area where Abu Akleh was standing when she was killed.

“All evidence, facts and investigations that have been conducted proved that Israel was the perpetrator and that it had killed Shireen and it should bear responsibility for its crime,” said Nabil Abu Rudeineh, a spokesman for Palestinian President Mahmoud Abbas.

Abu Akleh’s family said it was “deeply hurt, frustrated and disappointed” by the Israeli statement which it said “tried to obscure the truth and avoid responsibility for killing Shireen Abu Akleh”.

The Israeli investigation, which included interviews with the country’s soldiers, analysis of the scene as well as audio and video recordings, found it was “not possible to unequivocally determine the source of the gunfire” which killed Abu Akleh.

But Israel has repeatedly denied she was knowingly targeted by its forces and said the investigation showed that soldiers had acted according to their rules of engagement.

“We can say for 100% sure that no IDF soldier intentionally directed fire on a reporter or non-involved person on the ground,” a senior military official who briefed journalists on the findings of the investigations said.

“It is clear that they are trying to perpetuate ambiguity and deception on the one hand, while at the same time clear themselves of wrongdoing by claiming that there was an exchange of fire,” he said. “These are all lies, because all the accounts and videos and witnesses disprove their claims.”

The Committee to Protect Journalists said the statement issued by the Israeli military was “late and incomplete” and “does not provide the answers–by any measure of transparency or accountability–that her family and colleagues deserve.”

A report from the United Nations human rights office in June said Abu Akleh had been standing with other reporters and was clearly identifiable as a journalist from her helmet and blue flak jacket marked with a press badge when she was shot and killed by a single bullet. A colleague was wounded in the incident by another bullet.

The report said information it had gathered suggested she had been killed by an Israeli soldier.

Palestinian officials and Abu Akleh’s own family have said they believe she was killed deliberately and they have rejected Israeli statements that there were militants near where she was standing.

Forensic examination of the bullet which killed her, conducted under U.S. oversight in July, failed to reach any conclusion because the bullet was too badly damaged.

A report from the U.S. State Department in July concluded that she was probably killed by fire from an Israeli position but that there was no evidence to suggest she was intentionally targeted by Israeli forces.