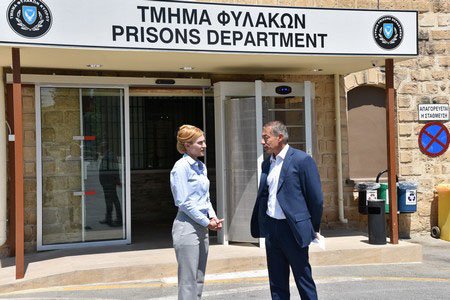 The suspension of the head of the drugs squad (Ykan) following accusations made by prison director Anna Aristotelous, has been extended until September 15, the Justice Minister Stefi Drakou announced late on Monday.

The announcement specifically states that Drakou was informed by the Attorney General that the criminal investigator Achilleas Emilianidis requested and was given an extension until September 15, 2022, to complete the investigation.

“Acting within the framework of its responsibilities and after taking into account the positions of the senior police officer, as well as all the evidence before it and the principles and criteria formulated by the case law, it decided to extend its availability until September 15, 2022, with the aim of ensuring the integrity, effectiveness of the investigation and the protection of public interest,” the statement said.

According to the statement, if the investigation of the independent criminal investigator is completed before September 15, then the suspension will be lifted accordingly.

The row exploded in mid-June when Aristotelous alleged that a senior police officer – later reported to be the head of the drugs squad – was colluding with an inmate to secure damaging footage of her and her assistant.

Emilianides said that his report into the matter is due by September 15, and he is still working on the report as there are some loose-ends in the investigations to tie up.

The suspension of the Ykan officer was initially supposed to expire on September 2, after which Drakou was expected to decide if it would be extended.

The officer was suspended in June by the minister, and the Cyprus News Agency said she will wait for Emilianides’ report to take further decisions.

In June, Aristotelous filed a formal complaint, through her lawyers, against the senior police officer.

“My lawyers have hand-delivered my complaints to the attorney-general, alongside all of the relevant evidence regarding the actions of a senior officer that were intended to harm me, and which we believe constitute a blatant act of corruption, more so because they were committed by a member of the police,” Aristotelous told reporters after the demonstration.

“We are talking about a senior officer who did not hesitate to use his influence, abusing his power, and no one can question any such action during the investigation”.

The accusations also led to a second investigation, which will see a team appointed by the deputy attorney general investigate allegations of drug and mobile phone use in prison.

Aristotelous and the unit’s senior officer Athina Demetriou asked to be transferred from their positions a day after the second investigation was announced.

France, Germany to provide each other with gas, electricity, to weather crisis