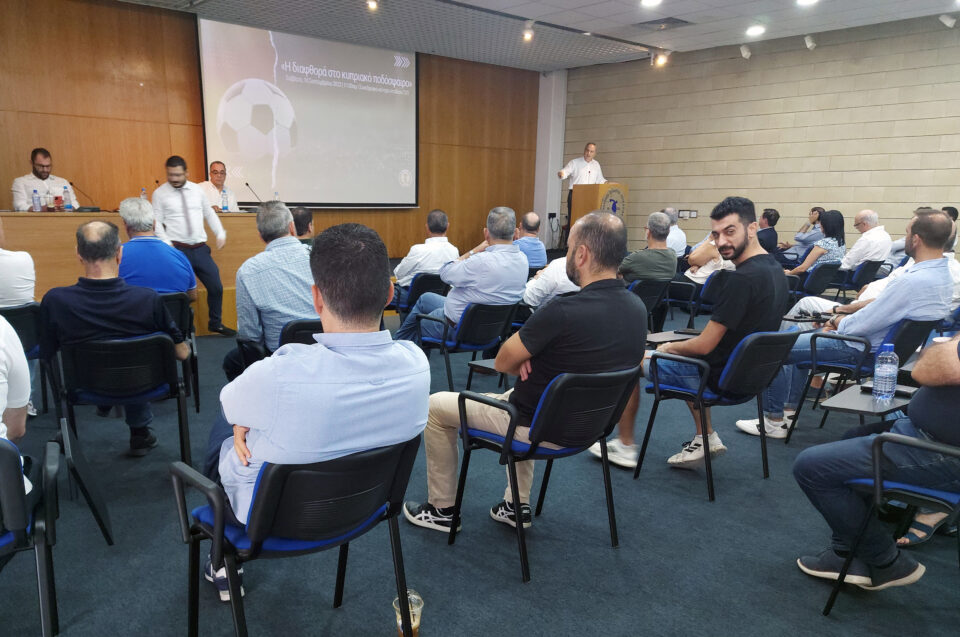 Football corruption is an ‘open wound’ in Cyprus, main opposition party Akel said on Saturday during the presentation of a survey that showed most fans believe match-fixing is a huge problem in the sport.

There is a need for consolidation of the phenomena of corruption within local football, Akel MEP Giorgos Georgiou said as he presented his suggestions following the results of a recent survey by the Pancyprian footballers’ association.

Corruption in Cypriot football puts our country to shame, Georgiou said, noting how the situation “has reached a point of no return”.

According to the footballers’ survey, an overwhelming percentage of the fans believe that there are many things wrong with Cypriot football. They also believe that there is a huge problem in terms of corruption, match-fixing and refereeing.

While there is a great lack of trust in the institutions of football, fans trust the managements of their teams, Georgiou said.

Akel denounced cases of illegal betting involving millions, Georgiou said, for which in 2016 police operations were carried out and evidence was collected that could be admitted in court, but “were scandalously handled and in practice covered up”.

He added that dozens of red files over the years were either not investigated or never reached any conclusions. “This raises legitimate questions about what has not been done or what is being done by the authorities,” the MEP said.

Football corruption was also admitted by the president on several occasions, who referred to measures and strict checks that were never implemented.

“Citizens are fed up with findings and declarations. Immediate, drastic and radical measures are finally required,” Georgiou said.

He explained that institutional restructuring is needed of the Cyprus football association (CFA) that will provide financial transparency, control and restriction of its power as well as restructuring of the statutes and its management.

Uniform legislation covering the entire sporting life of Cyprus and sporting bodies is an “urgent need”, the Akel MEP said, but also the amendment of the sports legislation governing the operation of the Cyprus sports organisation.

To tackle corruption in sports, the state must also protect public interest and control the management of public money.

For his part, Akel leader Stephanos Stephanou compared efforts to tackle corruption within football with other corruption scandals involving the island where attention is only given temporarily but no action is adopted in the long run.

“In Cyprus – and especially under this government – when a scandal breaks out, there is a flurry of statements, meetings, announcements. When the spotlight goes out, nothing happens. No investigation, no punishment, not even accountability as if nothing is happening. Life goes on.”