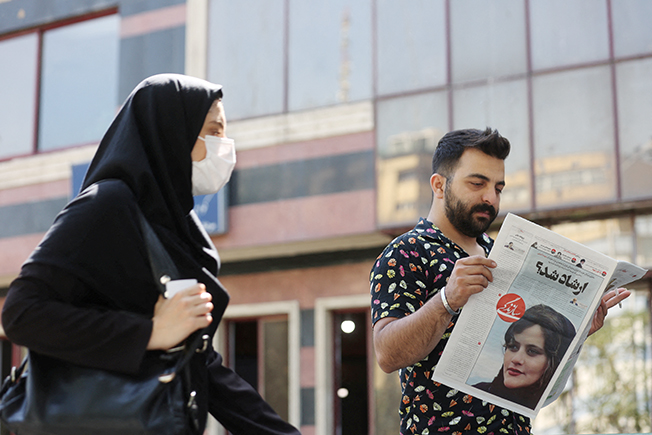 A man views a newspaper with a cover picture of Mahsa Amini, a woman who died after being arrested by the Islamic republic's "morality police" in Tehran, Iran

Iranian police said on Monday the death of a young woman in custody was an “unfortunate incident” they do not want to see repeated, a semi-official news agency reported, denying accusations of mistreatment that have fuelled protests.

Mahsa Amini, 22, fell into a coma and died following her arrest in Tehran last week by the morality police, sparking protests in parts of Iran including Tehran and the Kurdistan province where she came from.

A video posted by Kurdish rights group Hengaw showed security forces in riot gear running down a street in the city, at least one of them firing what appeared to be a gun.

Reuters could not verify the videos’ accuracy.

The police have said Amini fell ill as she waited with other women being held by the morality police, who enforce strict rules imposed since Iran’s 1979 Islamic revolution requiring women to cover their hair and wear loose fitting clothes.

But her father told pro-reform Emtedad news website on Sunday that his daughter was fit with no health problems. He said Amini had suffered bruises to her legs and held the police responsible for her death.

Stepping up denials of any wrongdoing, Greater Tehran Police Commander Hossein Rahimi said “cowardly accusations” had been made against Iranian police, Amini suffered no physical harm, and the police had “done everything” to keep her alive.

“This incident was unfortunate for us and we wish to never witness such incidents,” Rahimi said in the statement reported by the Fars news agency.

The police screened a video showing a woman identified as Amini walking into a room and taking a seat alongside others. It then fast-forwards to show her on her feet talking to someone who appeared to be inspecting part of her clothing.

The woman identified as Amini then raised her hands to her head and collapsed.

Rahimi said paramedics arrived within one minute of her collapse.

Amini’s father told Emtedad on Sunday that the police took two hours to transfer her to hospital and if she had arrived earlier she would not have died.

Rahimi said he could not comment on the cause of death because this was a medical rather than a security issue, adding that the morality police were “doing positive work”.

Amini’s death could ramp up tension between the establishment and a Kurdish minority numbering 8 to 10 million.

Iran’s elite Revolutionary Guards have put down unrest in the country’s Kurdish areas for decades, and many Kurdish activists have been sentenced to long jail terms or death.

An Iranian Twitter account with 60,000 followers focused on protests in Iran said shopkeepers had gone on strike in Kurdish cities on Monday. It also posted a video showing what it said was a protest at a Tehran university against the Basij, a paramilitary militia force.

“Basij get lost,” the protesters chanted.

“I will kill the one who killed my sister … By cannon, tank or firecracker, clerics get lost.”

Waves of the hijab protests have hit the clerical establishment in recent years. Read full story

These included 2014, when rights activist Masih Alinejad started a Facebook campaign “My Stealthy Freedom”, in which she shared pictures of unveiled Iranian women sent to her.