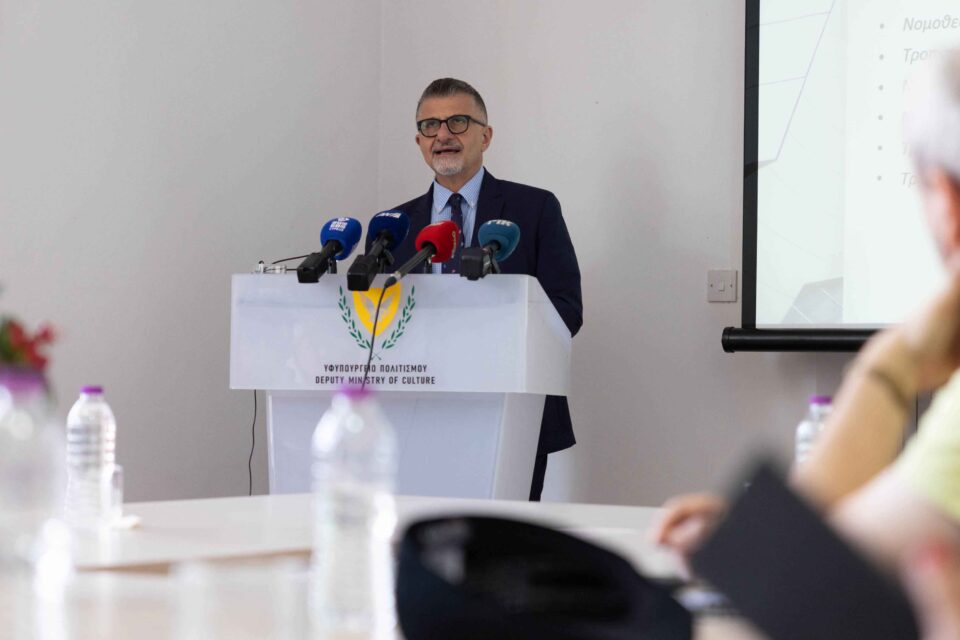 The deputy minister speaking on Wednesday

Two and a half months after he was sworn in, Cyprus’ first ever deputy minister of culture Yiannis Toumazis on Wednesday outlined the six main pillars of his ministry.

Toumazis spoke of three legislative proposals and three amendments to existing laws, the first three legally defining the status of artists, promoting tax incentives in the cultural sector and aiming to decorate public buildings with artworks.

As far as legislative amendments are concerned, Toumazis vowed to amend the copyright law to better protect artists, to actively cooperate with the public works department and to strengthen the deputy ministry’s responsibilities regarding monuments, so that its recommendations are considered binding.

“We have already started and will intensify public consultations with relevant stakeholders and social organisations in our domain so that law proposals and amendments reflect today’s needs,” Toumazis said.

“Our final goal will always be the safeguarding of our cultural heritage.”

Toumazis added that legally defining artists’ status “is a main priority for the deputy ministry.”

“We submitted a legislative draft on the subject to the Council of Ministers at the beginning of September, aiming to secure social and professional statuses for artists in Cyprus, which has been a constant demand from them for decades.

“Our goal, in this respect, is to ensure to everyone working in the cultural field enjoys the same rights and is subject to the same obligations as every other worker,” Toumazis said.

As far as the copyright law amendment is concerned, he vowed, in cooperation with the commerce ministry, to amend the 1976 law by further protecting artists’ intellectual rights and claims.

“We need to modernise the law and adapt it to today’s standards and conditions to ensure its correct functioning.”

Moreover, as far as his promise to decorate public buildings on the island with artworks, Toumazis said his deputy ministry is working on a law proposal calling for new public buildings to feature artworks “of at least one per cent value of the total construction cost.

“We are already in talks with the finance ministry regarding this key point of our programme, as well as for promoting tax incentives and schemes aimed at promoting cultural activities in Cyprus, which will consequently attract investments.

“Our goal is to amend the existing Income Tax Law to include provisions that will increase private investments for cultural projects and at the same time strengthen the artistic production of our country.”

As far as the last key point listed by Toumazis is concerned, the close collaboration with the public works department, he aims to include the deputy ministry of culture in decision-making processes regarding the aesthetics of public spaces.

“We seek to be included during the preparation, design and construction of public spaces,” Toumazis explained.