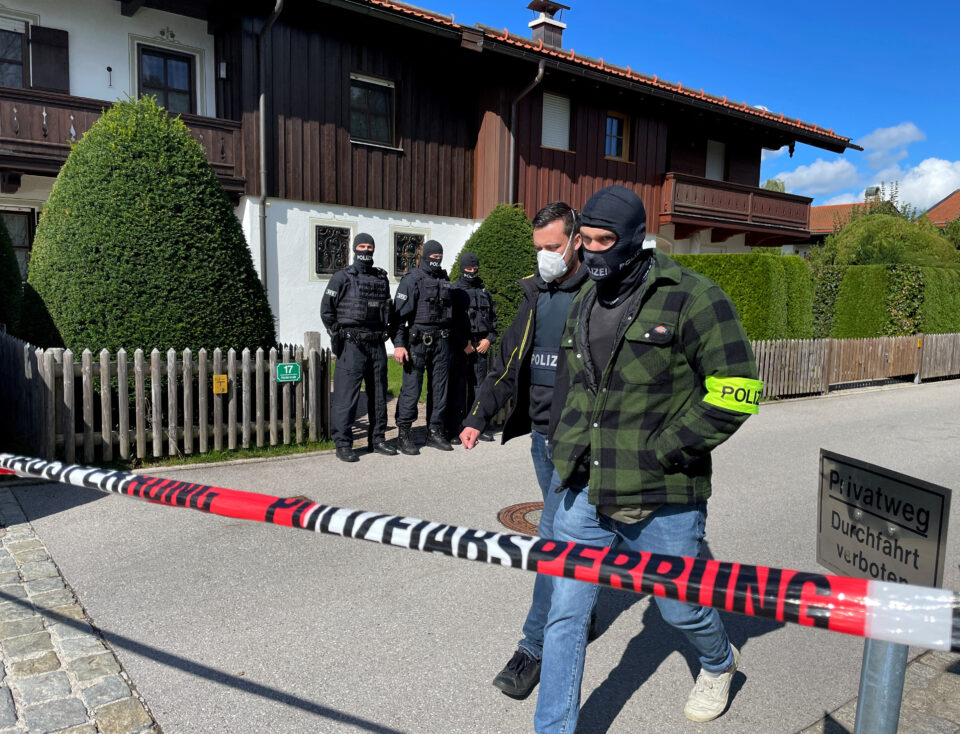 German police secures the area after they raided the lakeside residence of Russian oligarch Alisher Usmanov in the southern state of Bavaria, along with several other properties in Rottach Egern, Germany, September 21, 2022. REUTERS/Louisa Off

German police raided a lakeside villa registered to Russian-Uzbek oligarch Alisher Usmanov in the southern state of Bavaria on Wednesday as part of investigations into suspected money-laundering, sources familiar with the matter said.

Over 250 officers searched an apparently abandoned villa in the upmarket holiday town of Rottach-Egern on the shores of the Tegernsee.

“Any allegations of tax evasion by Mr Usmanov are unfounded, false and damaging to his honour, dignity and reputation, which Mr Usmanov will defend by all disposable legal means,” Usmanov’s press service said in a statement.

Usmanov was added to the Western sanctions list in the wake of Russia’s invasion of Ukraine on Feb. 24.

The 69-year-old, who is active across a range of business sectors and has a net worth of $14.6 billion, according to Forbes, is at the centre of two separate investigations into his finances in Germany.

The prosecutor general’s office in Frankfurt said the raids had targeted a Russian businessman suspected of having used his “extensive and complex network of companies and corporations” to disguise the origins of several transactions between 2017 and 2022.

The transactions are believed to have amounted to a multi-digit-million-euro sum, the prosecutor general said in a statement which did not name Usmanov. Sources familiar with the matter confirmed the villa was registered to Usmanov.

Usmanov’s press service said that he does not own any real estate property in Germany. “The properties concerned are in family trusts, of which Mr Usmanov is not a beneficiary.”

In a separate probe, the Munich state prosecutor suspects Usmanov of having tasked a security company with observing properties in Upper Bavaria financially linked to him even after he was added to the European Union sanctions list.

His payment of that security firm is thought to have flouted a ban on the use of frozen funds, the Munich prosecutor said.

The guards and heads of the security company, which was not named by authorities, are also under investigation.

Wednesday’s raids stretched across three states and the city of Hamburg, according to authorities.

The NDR broadcaster reported that a 156-metre-long yacht, the Dilbar, which authorities say belong to Usmanov’s sister and is also subject to sanctions, was towed from the port of Hamburg to Bremen overnight because the shipyard where it had been moored needed space. The federal criminal police office has said it is worth half a billion euros.

Since the war in Ukraine began, Germany has frozen assets worth at least 4.88 billion euros under EU sanctions on Russian citizens, the Spiegel reported citing a document from the economy ministry.