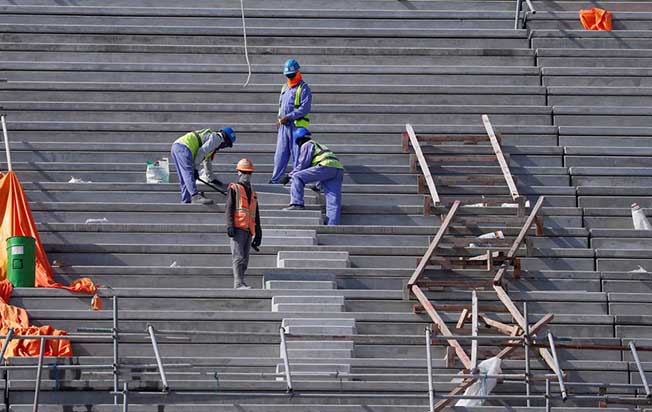 Workers are seen inside the Lusail stadium which is under construction for the upcoming 2022 Fifa World Cup during a stadium tour in Doha, Qatar, December 20, 2019

Qatar has faced intense criticism from human rights groups over its treatment of migrant workers, who along with other foreigners comprise the bulk of the country’s population.

Qatari authorities did not immediately respond to a request for comment from Reuters about the rights groups’ report.

The government of Qatar has said that its labour system is still a work in progress, but denied a 2021 Amnesty report that thousands of migrant workers were still being exploited. Read full story

Last week, a YouGov survey of more than 17,000 fans from 15 countries — 10 of them European — commissioned by Amnesty showed 73% of respondents would support a proposal for FIFA to compensate migrant workers, while 10% opposed it. Read full story

Minky Worden, the director of global initiatives at Human Rights Watch, said that sponsors should use their “considerable leverage” to apply pressure on FIFA and Qatar to fulfil their responsibilities to workers.

“Brands buy rights to sponsor the World Cup because they want to be associated with joy, fair competition and spectacular human achievement on the field — not rampant wage theft and the deaths of workers who made the World Cup possible,” said Worden.

The three human rights organisations said they had written to FIFA’s 14 corporate partners and World Cup sponsors in July and that four of them — AB InBev/Budweiser, Adidas, Coca-Cola, and McDonald’s had indicated their support for ensuring remedy for workers.

In May, Amnesty and other rights groups had called on FIFA to earmark $440 million to compensate migrant workers in Qatar. Read full story

FIFA said then that it was assessing Amnesty’s proposition and that workers had received payments of a total $22.6 million as of December 2021, with an additional $5.7 million committed by contractors.

It added last week that a wide range of measures had been implemented in recent years to improve protection for workers in Qatar, which will host the World Cup from Nov. 20.

Over 1,500 companies under the control system for organic production