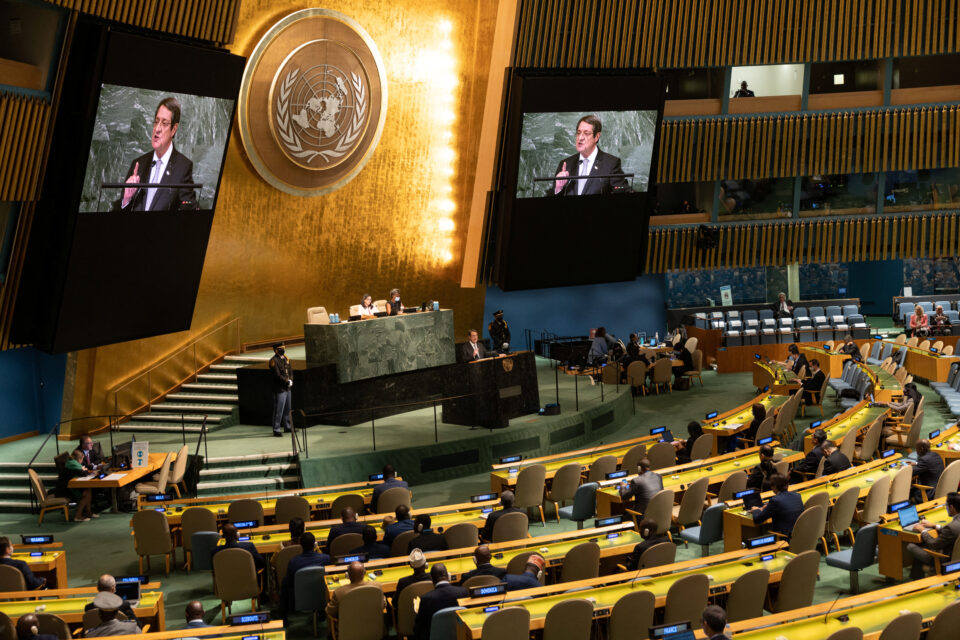 President Nicos Anastasiades on Friday addressed the UN general assembly for the last time as his presidency wraps up, in what could be described as a bold parting shot aimed at the organisation for its lack of tangible action and sway as a global tool for peace, prosperity and territorial integrity.

“’How is it then that we come back again and again, year after year, as a kind of ritual, to attest to the dismal lack of effectiveness for some and the embellishment attempt for others, for what is in fact our inability to fulfil the aims of the UN Charter?” he said.

“Why do the decisions of the Security Council remain in their overwhelming majority sheer certificates attesting violations? Why are international law and international agreements not implemented? Why do strategies and programmes, aiming at creating better conditions for people that are suffering, remain wishful thinking?” he added.

“Although I am well aware that what I am about to say is well known to all of you, for the sake of history I cannot but relay some truths which are leading to a declining path and gradual loss of credibility of the United Nations.”

He said the UN was an organisation that was formed right after the second world war to prevent new disasters, cement peace, provide protection and hope to those in need of effective protection and action against challenges. “I know that what I am saying may be outside the bounds of diplomatic etiquette, but I do believe that the obligation of each leader before history is not to overlook failings and shortcomings in favour of wishful thinking or flattery.”

Anastasiades then went on to list what he believes are the UN’s weaknesses which in his opinion add to the organisation’s lack of effectiveness, from suggesting that the financial interests of powerful member-states to tolerance of violations based on common interests and alliances are all part of the problem.

“As a result of the same political expediencies, the UN, unfortunately, adopts an equal-distance stance, even when faced with the violation of decisions, resolutions and defined scope and terms of reference specified to the Secretariat. This results in emboldening offending states, which not only disregard international law, but also create new precedents outside the framework of legality,” he added.

Calling himself a “romantic ideologist”, Anastasiades told the members of the general assembly present that bold but necessary decisions regarding the set-up of the organisation were imperative in light of recent world events “with the imminent danger after 77 years of a new World War, following the illegal invasion of Russia to Ukraine.

“A global order which ensures that peace, security, human rights and sustainable development remain the highest values which we undertake to preserve and hold. Political will and determination to proceed with the reform and modernisation of the UN to a just, effective and efficient multilateral governance system,” he stressed.

The island’s soon-to-be former president then highlighted the parallels of his argument with the realities in Cyprus and the ongoing division and occupation by Turkish forces, reiterating his point that “when decisions or resolutions based on international law are not to be implemented or enforced, then this, rightly so, could be perceived as fostering or even rewarding arbitrariness.”

“This is what we are actually witnessing today with the Cyprus problem. Turkey, which systematically violates international law, calls on the international community to recognize its illegal faits accomplis. And as I have emphasised, the only way forward in resolving conflicts and for peace to prevail is none other than the unwavering adherence to international law and the UN Charter, not as arbitrarily interpreted by those who seek to disguise their revisionist aspirations,” Anastasiades stressed.

He then went on to detail all the failed attempts during his administration to find a solution to the almost half-century-old problem in Cyprus, and assured the room that the Greek Cypriot side would not give up its endeavour to reunite the two sides.

“I believe that it is clear that the Greek Cypriot community has exerted and will continue to exert every possible effort for the resumption of the talks, in order to reach a settlement based on the United Nations Resolutions,” he added.

“I might have not been able to see my homeland reunited, with my Greek Cypriot and Turkish Cypriot compatriots living in conditions of peace, prosperity and stability. However, I earnestly hope that during my lifetime, I will be able to witness a better and more stable future for humanity,” Anastasiades concluded.

Moscow ‘not threatening anyone’ with nuclear weapons