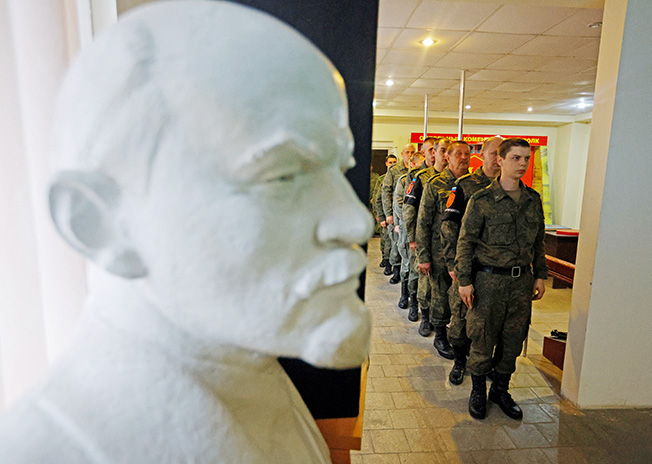 Service members of the self-proclaimed Luhansk People's Republic (LPR) line up to vote during a referendum on joining LPR to Russia, at a military unit in Luhansk, Ukraine

Russia began referendums on Friday aimed at annexing four occupied regions of Ukraine, raising the stakes of the seven-month-old war in what Kyiv called a coercive sham that saw residents threatened with punishment if they did not vote.

The votes on whether the regions should become part of Russia began after Ukraine earlier this month recaptured large swathes of northeastern territory in a counteroffensive against the invasion that began on Feb. 24.

With Russian President Vladimir Putin also announcing a military draft this week to enlist 300,000 troops to fight in Ukraine, the Kremlin appears to be trying to regain the upper hand in the grinding conflict.

And by incorporating the four areas into Russia, Moscow could portray attacks to retake them as an attack on Russia itself, a warning to Kyiv and Western supporters.

Putin on Wednesday said Russia would “use all the means at our disposal” to protect itself, an allusion to nuclear weapons.

The war has already killed tens of thousands of people, uprooted millions and pummelled the global economy.

The referendums had been discussed for months by Moscow-installed authorities in the four regions – in Ukraine’s east and southeast – but Kyiv’s recent battlefield victories prompted a scramble to schedule them.

Voting in the provinces of Luhansk, Donetsk, Kherson and Zaporizhzhia, representing about 15% of Ukrainian territory, is due to run from Friday to Tuesday. Polling stations were also set up in Moscow, for residents of those regions now living in Russia.

Serhiy Gaidai, Ukraine’s Luhansk region governor, said that in the town of Starobilsk, Russian authorities banned the population from leaving the city until Tuesday and armed groups had been sent to search homes and coerce people to vote.

“Today, the best thing for the people of Kherson would be not to open their doors,” said Yuriy Sobolevsky, the displaced Ukrainian first deputy chairman of the Kherson regional council, said on messaging app Telegram.

The referendums have been condemned by Ukraine, Western leaders and the United Nations as an illegitimate, choreographed precursor to illegal annexation. There will be no independent observers, and much of the pre-war population has fled.

The Organisation for Security and Cooperation in Europe (OSCE), which monitors elections, said the outcomes would have no legal bearing as they do not conform with Ukraine law or international standards and the areas are not secure.

Gaidai said that in the Russian-held town of Bilovodsk, a company director told employees voting was compulsory and anyone refusing to take part would be fired and their names given to security services.

“The mood of the Russians is panicky because they were not ready to carry out so quickly this so-called referendum, there is no support, there’s not enough people,” Kherson’s Sobolevsky said on messaging app Telegram.

Gaidai decried the plebiscites as “elections without elections”. He said people were being forced to fill out “pieces of paper” without privacy in kitchens and residential yards, with towns sealed off so people could not leave to avoid voting.

Reuters could not immediately verify the reports of coercion.

Moscow maintains that the referendums offer an opportunity for people in the region to express their view.

“Voting has started in the referendum on Zaporizhzhia region becoming a part of Russia as a constituent entity of the Russian Federation! We are coming home!” said Vladimir Rogov, an official in the region’s Russian-installed administration.

That administration said two cars with “Ukrainian saboteurs” had entered the area and were being “dealt with”, Russia’s TASS news agency reported. Reuters was unable to verify the report.

Ukraine says it will never accept Russian control of any of its territory.

“(The referendums) will give Moscow no upper hand. It’s all nonsense, bluff and political manipulation to frighten us and the Western countries with their nuclear stuff,” Oleksandr Yaroshenko, 65, a resident in the capital Kyiv, told Reuters.

Russia previously used a referendum as a pretext for annexation in Ukraine’s Crimea in 2014, which the international community has not recognised.

Hinting at the Kremlin’s calculation in staging the referendums, ex-president Dmitry Medvedev, now deputy head of its national security council, warned Moscow would henceforth deem any attack on the four territories as one on Russia itself.

For “self-defence”, any weapons in Moscow’s arsenal, including strategic nuclear weapons, could be used, he said.

Putin maintains Russia is carrying out a “special military operation” to demilitarise Ukraine, rid it of dangerous nationalists and defend Russia from NATO.

Kyiv and the West say the war is an unprovoked, imperialist bid to reconquer a country that shook off Russian domination with the 1991 break-up of the Soviet Union.

War crimes including executions, rape, torture and confinement of children have been committed in Russian-occupied areas of Ukraine, Erik Mose, head of a U.N.-mandated investigation commission, said on Friday, citing visits to 27 areas and interviews with over 150 victims and witnesses.

Mose said commission investigators intend to examine a mass burial site near Izium, in eastern Ukraine, where hundreds of bodies were found earlier this month after Kyiv’s counter-offensive drove out Russian occupiers.

Russia denies deliberately attacking civilians in the conflict and says accusations to that effect are a smear campaign.

A minute with Jacob Papageorgiou – Designer / Founder of mojodesign