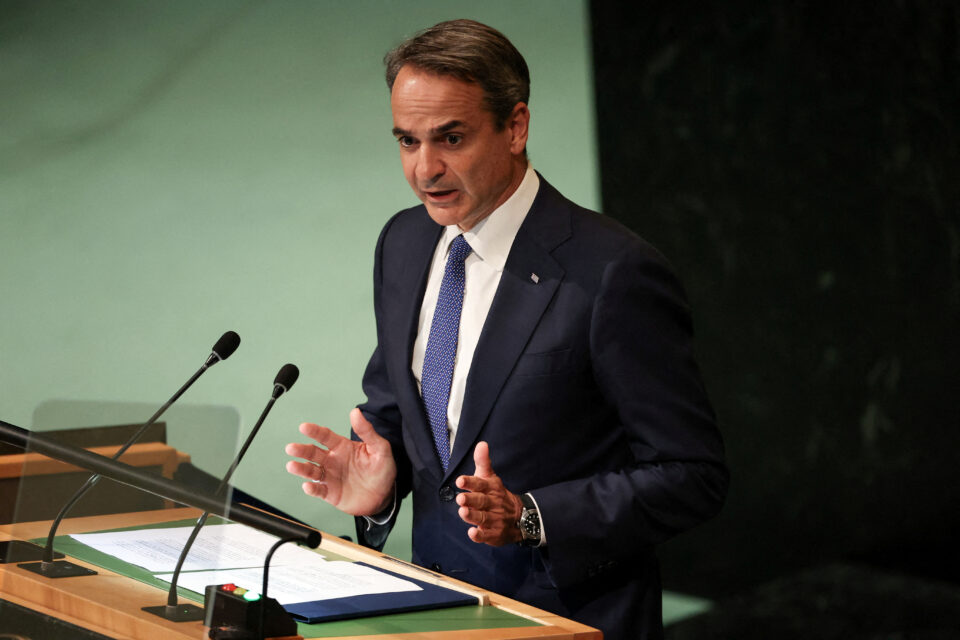 Greek Prime Minister Kyriakos Mitsotakis said Ukraine was not the only country in post-war Europe to have been attacked, as he addressed the 77th UN General Assembly in New York late Friday.

He stressed that Greece strongly supported both the Secretary General’s efforts to resume negotiations for a mutually acceptable settlement for Cyprus, and the confidence building measures proposed by President Nicos Anastasiades”.

“Ukraine is not the only country in post-war Europe to have been attacked. For nearly 50 years, Cypriots have lived on a divided island as the result of an illegal invasion and a military occupation”, Mitsotakis said.

He noted that “Ankara and the Turkish-Cypriot leadership, isolated and alone in the international community, continue to insist upon unacceptable demands for a two-state solution”. “They refuse to resume negotiations for an agreed settlement on the basis of successive Security Council Resolutions”, he said.

He also stressed that “the international community must not ignore illegal Turkish attempts to impose a new fait-accompli on Cyprus, in particular in the fenced area of Varosha, as well as new and repeated violations of Cyprus’ maritime zones and airspace”.

Elsewhere in his address, Mitsotakis accused Turkey’s leadership of undermining peace and stability in the Eastern Mediterranean region at time of war but assured Turkish people that Greece is not a threat to their country.

“Turkey’s leadership seems to have a strange fixation with my country. … They threaten that Turkey will come at night, if it so decides. This is the language of an aggressor,” Mitsotakis said, during his address to the United Nations General Assembly.

“From the UN I would like to address … the Turkish people directly: Greece poses no threat to your country. We are not your enemies, we are neighbours,” he said. “Let us move forward.”

Long-existing tensions between the two countries have flared up recently. Greece complained to NATO and the United Nations this month over what it called “inflammatory” statements by Turkish President Tayyip Erdogan.

Erdogan accused Greece this week of “crimes against humanity”, referring to its treatment of migrants, and earlier this month of occupying islands in the Aegean Sea that have a demilitarised status.

Greece says Turkey is challenging the Greek sovereignty of the islands and is exploiting the migration issue.

“Greece will not be bullied by anyone,” Mitsotakis said.

During his speech, Mitsotakis also referred to Greece’s standing demand for the permanent return from the British Museum in London of the Parthenon marbles.

The sculptures were removed from the Parthenon temple, a 5th-century BC architectural masterpiece, in Athens in the early 19th century by British diplomat Lord Elgin at a time when the country was under Ottoman rule.

“No matter how long it will take, the Parthenon marbles will eventually be coming home,” the conservative premier said.

(Compiled from CNA and Reuters)