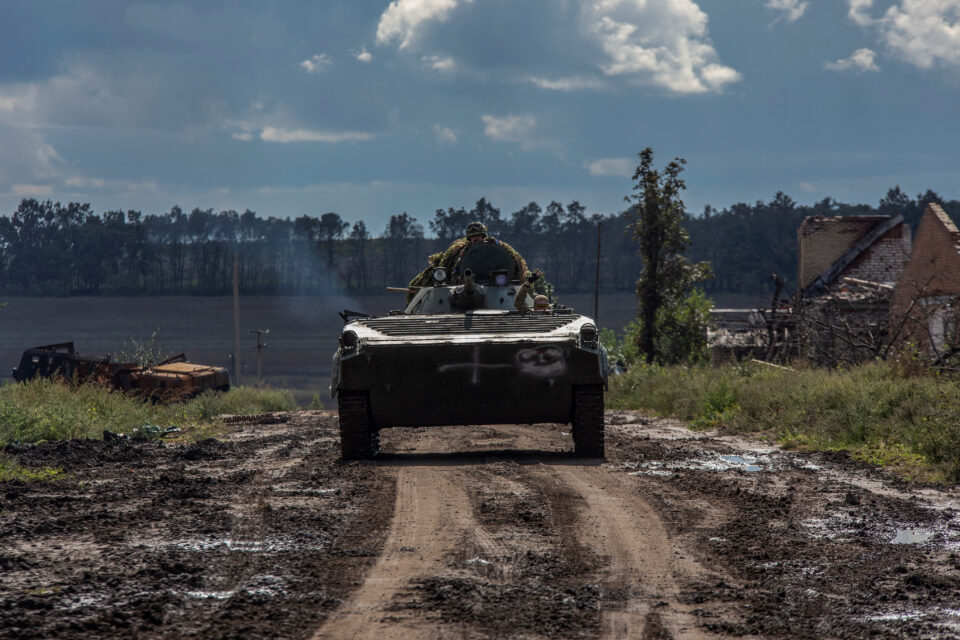 Ukrainian service members ride in an armoured fighting vehicle, amid Russia's attack on Ukraine, in Kharkiv

Shelling hit southern Ukraine late on Saturday, while Russia sought to defend its seven-month war even as it moves to escalate the conflict with the expected annexation of regions in the east and south that its forces have seized.

Ukraine and Western countries say referendums on joining Russia in territories Russia has captured are a sham designed to justify their annexation and the ramping up of hostilities with newly drafted troops after recent battlefield losses.

Russian Foreign Minister Sergei Lavrov addressed the U.N. General Assembly and the world’s media on Saturday, casting opposition to Russia’s assault on its neighbour as limited to the United States and countries under its sway.

Nearly three-quarters of countries in the assembly voted to reprimand Russia and demand it withdraw its troops shortly after the Feb. 24 invasion that Russia calls a special military operation.

Russia’s military campaign has killed tens of thousands, left some Ukrainian cities wastelands and triggered Russia’s biggest confrontation with the West since the 1962 Cuban Missile Crisis.

Ukraine and Russia traded blame for missile strikes and shelling in various parts of the south and east.

Ukraine’s military said early on Sunday that Russian forces had launched dozens of missile attacks and air strikes on military and civilian targets, including 35 “settlements”, in the past 24 hours.

Reuters was unable to verify either sides’ claims.

The votes on becoming part of Russia were hastily organised after Ukraine recaptured large swathes of the northeast in a counter-offensive this month.

Ukrainian officials said people were banned from leaving some occupied areas until the four-day vote was over, armed groups were going into homes, and employees were threatened with the sack if they did not participate.

Ukrainian President Volodymyr Zelenskiy said the votes would be “unequivocally condemned” by the world, along with the mobilisation Russia began this week, including in Crimea and other areas of Ukraine occupied by Russia.

Russia maintains that the referendums offer an opportunity for people in those regions to express their view.

Lavrov, in a news conference following his speech to the assembly in New York, said the regions where votes are underway would be under Moscow’s “full protection” if they are annexed by Russia.

Asked if Russia would have grounds for using nuclear weapons to defend annexed regions of Ukraine, Lavrov said Russian territory, including territory “further enshrined” in Russia’s constitution in the future, “is under the full protection of the state”.

“All of the laws, doctrines, concepts and strategies of the Russian Federation apply to all of its territory,” he said, also referring specifically to Russia’s doctrine on the use of nuclear weapons.

The Group of Seven industrialized economies have said they will not recognise the results of the votes. Read full story

Ukraine’s foreign minister, Dmytro Kuleba, said Russia’s statements on the possible use of nuclear weapons were “absolutely unacceptable” and Kyiv would not give into them.

“We call on all nuclear powers to speak out now and make it clear to Russia that such rhetorics put the world at risk and will not be tolerated,” Kuleba said.

Putin on Wednesday ordered the first mobilization since World War Two, sending some Russian men heading swiftly to borders, with traffic at frontier crossings with Finland and Georgia surging and prices for air tickets from Moscow rocketing.

More than 2,000 people have been detained across Russia for protesting the draft, including 798 people detained in 33 towns on Saturday, according to independent monitoring group OVD-Info.

Frustration has even spread to pro-Kremlin media, with one editor at the state-run RT news channel complaining that problems like call-up papers being sent to the wrong men were “infuriating people”.

When asked on Saturday why so many Russians were leaving the country, Lavrov pointed to the right of freedom of movement.