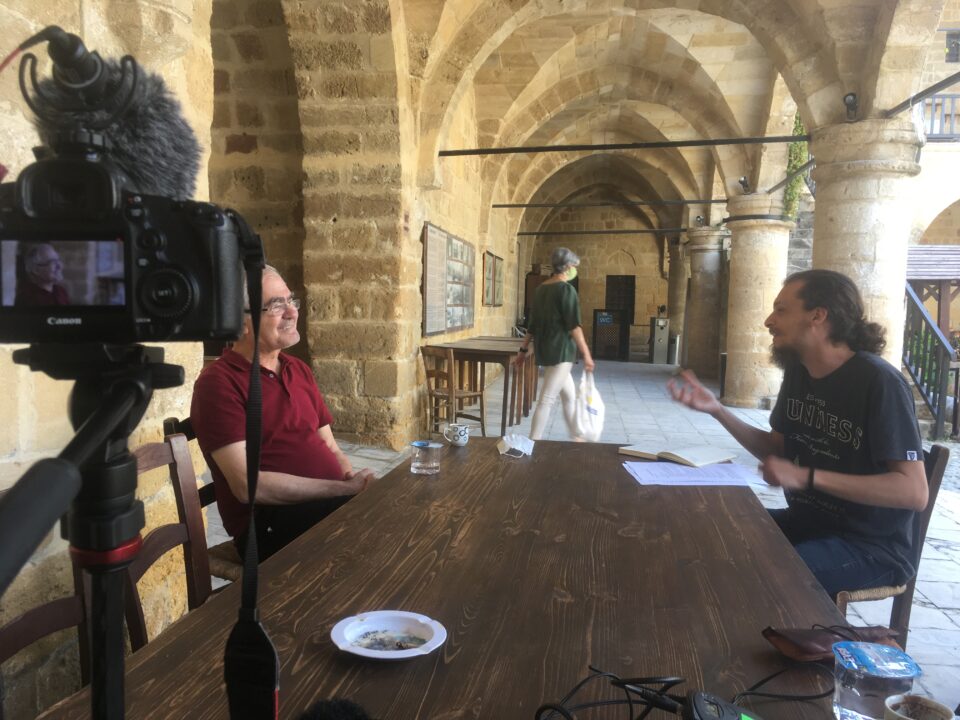 Everybody has a story from the other side. A new documentary looks at the people whose lives span the divide

Spearheaded by the Home For Cooperation in Nicosia and created while the island’s borders were firmly closed due to Covid measures, the film focuses on the impact of the closures. Without a doubt, people making use of the crossings and somewhat ‘enjoying’ the freedom of moving from one side of the island the other for the past 19 years were left dumbfounded. Yet, as Pouliasis recorded a series of individual stories to depict the impact of the closure, it becomes apparent the subject matter at hand belongs both to the distant past and the future. Even though the crossings have now reopened, the reality of the country’s division and the relationships developed among it are, as the documentary’s title puts it Divided Still.

“The documentary was a motive,” Pouliasis said. “The title Divided Still implies that the situation is already bad, it has been bad and it’s still bad. Covid was kind of reminder that this (the division of the country) is an unstable situation, that anything can happen at any time,” he added.

“As soon as the idea of this documentary was on the table,” Pouliasis said he knew the checkpoints were a problem, their temporary closure a reminder of a problem that could be portrayed in everyday stories… “For some people [the closures] is not a big deal but there are families that live and work on different sides”.

To this end, the documentary focuses on five characters that represent families and people whose lives span the divide. As the crossing first opened in 2003, “many relationships have developed, friendships have been created, we now have mixed families, people work across the divide, everybody, somehow, has a story from the other side,” he added. And it is through these five stories that the impact of the temporary closure of the crossings, along with the wider implications of the country’s division are brought to light.

“It’s very important to know, and there are many statistics that reveal that there are many people that have never crossed, and another large majority that have crossed only once or twice..,” Pouliasis said, implying that for many checkpoints are not part of their daily life.

The first character in the documentary is a Turkish Cypriot who has been working in the south since 2003. “There are more than 1,500 Turkish Cypriots legally working in the republic and unofficial numbers are more than 3,000-4,000 people,” Pouliasis said. These would have been among the hardest hit when Covid forced the crossings to close even though measures eventually assisted them.

The second character is a Maronite who lost his father during lockdown. “This is a large group that has been affected since 1974… this is my favourite story in the film because it’s about people who, for me, chose to stay in the north,” Pouliasis said. In the film, the Maronite talks about the experience of organising hospital visits for his father in the south during lockdown, and the difficulties of organising his funeral once he died and bringing his body back to the north for burial. “The closures reminded them of the situation back in the 70s and it was frightening for them, they were just sad because they couldn’t see their families,” he added.

Friendships formed across the divide are revealed through the well-known ‘Traitors Club’, a group of people from both sides of the divide who have met for coffee every week since the crossings opened. “They believe that Greek Cypriots and Turkish Cypriots have more in common than Greek Cypriots have with Greeks or Turkish Cypriots have with Turks and these people found this out just by hanging out with each other,” Pouliasis said. The documentary also follows the story of a businessman who works in the north but lives in the south. “We wanted to portray someone that lives on different sides of the island at the same time. He told us that relationships have materialised because of the crossings, friendships have materialised because of the crossings and I agree with him”.

Finally, the film’s last story is that of a British Cypriot who lives in the north although his parents are from Paphos. “In the 60s his parents moved to the UK and eventually he married a Turkish Cypriot woman and decided to move to the north of Nicosia. He now works in the south as a teacher and his daughter goes to school there… this story is about a guy that works in the south but mostly how it affected his family and his daughter, having to show her passport every day and the questions it raises in a child,” reveals Pouliasis. “This character hints on how we’re poisoning the next generation by letting our children normalise” crossing.

“If you ask me, yes the crossing are there and they have been normalised, I’m 35 years old and I only know borders and [even if they are not technically] borders they are still there psychologically,” he concluded.

We end our conversation on the fact that this film touches on a long-standing story, regardless of the fact the film was made largely to show the problems caused by Covid, a long story that is from the past but is ongoing, highlighting that the crossings are and issue that is dealt with on a daily basis for thousands of people.

Divided Still has already been screened at the Kalamata Monthly International Short Documentary Festival and has been selected as a semi-finalist for the annual festival in October. It will be screened at the Ethnokino Film Festival in Bern on September 30