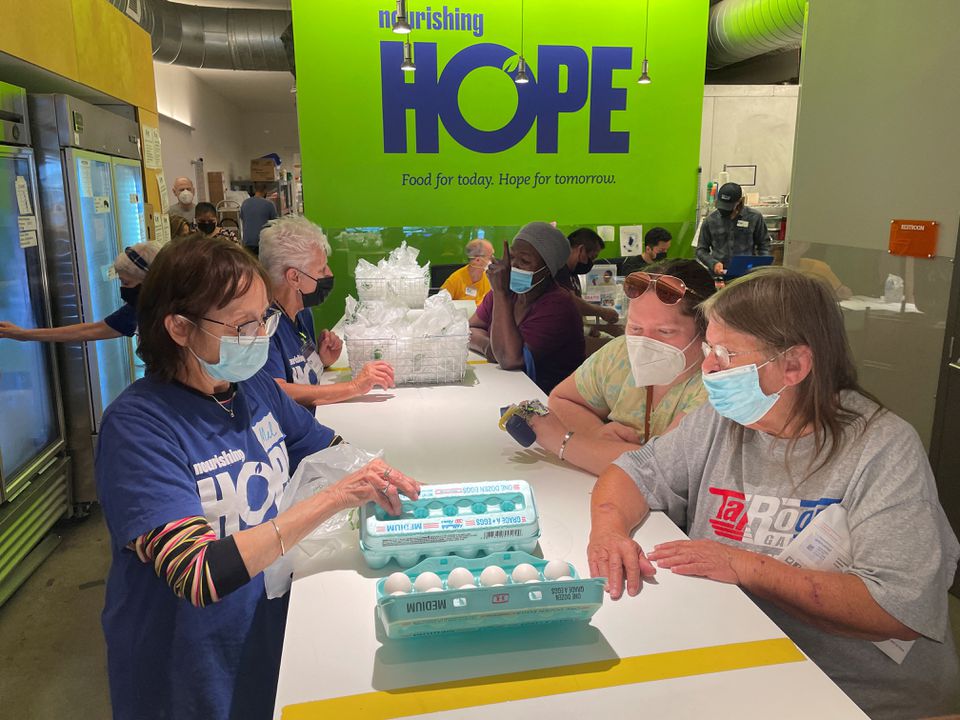 Grace Melt made her first visit to the Nourishing Hope food pantry on Chicago’s North Side in August. Throughout the COVID-19 pandemic, she used food stamps issued by the federal government to buy groceries while out of work for a knee injury.

But this summer, the food stamps couldn’t keep up with the grocery store’s rising prices, sending her in search of a food donation for the first time.

“It’s definitely not enough. It never lasts ’til the end of the month,” she said of the food stamp benefits. “And now they’ve increased prices… So now you have to resort to coming here to a food pantry, to fill in.”

Rising hunger is a problem for US President Joe Biden as he gears up to host the first White House Conference on Hunger, Nutrition and Health in more than 50 years and pledges to eliminate hunger in the United States by 2030. Voters may punish his Democratic Party for inflation in November’s mid-term elections in a year the economy has been top of mind for voters, according to a Reuters/Ipsos poll.

The Biden administration increased funding for food stamps nearly a year ago, but at the same time has purchased about half as much food as the Trump administration did in 2020, for food banks, schools and indigenous reservations, according to data obtained from a US Agriculture Department(USDA) source.

Escalating food prices are eroding the reach of food stamps, which average around $231 per person per month in 2022, according to USDA data, sending more people to food banks, that are in turn receiving less food from the government.

The Consumer Price Index (CPI) for food at home climbed to 13.5 per cent year-over-year in August, the largest 12-month increase since 1979, according to the Bureau of Labor Statistics. Food prices have been near record highs globally since Russia’s invasion of major grains producer Ukraine.

Hunger rates this summer also rose to levels not seen since early in the pandemic when lockdowns threw supply chains into chaos.

“This is a problem that started to get better in 2021 and then rapidly got worse,” said Vince Hall, Chief Government Relations Officer for Feeding America, the nation’s largest network of food banks. “Most of America’s food banks are seeing the lines grow with each passing week.”

Some advocates argued for spending more on food stamps or cash distribution, which give people more choice than food handouts and also benefit local businesses. A Trump administration food box program was criticized as inefficient and ended by the Biden administration, which also put cash in families’ pockets through expanded child tax credit payments until they expired last December.

Food insufficiency for families with children climbed to 16.21 per cent by July 11, when nearly 1 in 6 families reported sometimes or often not having enough to eat, according to the US Census Bureau’s Household Pulse Survey, the highest since December 2020. Hunger among children had fallen to a pandemic-low of 9.49 per cent in August 2021, due in part to the child tax credit payments, according to the US Census Bureau.

‘WE JUST MAKE DO’

Hunger eased in 2021 after both the Trump and Biden administrations distributed pandemic-benefit payments for families to purchase groceries, delivered billions of pounds of emergency food boxes and sent out monthly child tax credit payments.

But as pandemic restrictions eased, so did the appetite for congress and some states to fund hunger prevention efforts.

In fiscal year 2020, the US Department of Agriculture spent $8.38 billion on nearly 4.29 billion pounds of food bound for food pantries, schools and indigenous reservations. But food spending dropped steadily by nearly 42 per cent from 2020 to 2022, poised to reach $3.49 billion, the lowest since 2018. The agency bought just 2.43 billion pounds of food in the last year, according to the data acquired by Reuters.

The USDA endeavored to offset the fall in outright food purchases with additional Supplemental Nutrition Assistance (SNAP) benefits, also known as food stamps, adding nearly $31 billion from 2020 to 2022. But that additional aid has been limited by higher food costs, states letting emergency pandemic declarations expire and strict criteria on who qualifies.

James Carvelli, who works in construction, said the Nourishing Hope food pantry keeps him fed when work is slow. He doesn’t qualify for food stamps, and has noticed when the pantry runs low on some items.

“We just make do – They’ve got what they got, and I appreciate it,” he said.

The USDA recently announced it will purchase an additional $943 million in food through 2024, using Commodity Credit Corporation funds, normally set aside for loans and payments to US farmers to offset disasters or low commodity prices. The added funds still leave the USDA poised to spend less on food in the coming years than in 2020 and 2021, despite ongoing need.

Asked to comment, the Agriculture Department pointed to a drastic cut in pandemic funding authorized by Congress that limited the agency’s spending power for food banks and schools, many of which have canceled summer meal programs.

Hall, of Feeding America, lamented the cutting of some additional food assistance measures from the $430 billion Inflation Reduction Act signed into law in August, including investment in child nutrition and a permanent summer EBT program, a benefit designed to fill the gap when school meals are not available.

“There were things in earlier versions of this bill… that were extraordinarily important priorities for fighting hunger, that unfortunately were not in the final version,” he said.

This year, the USDA is on track to buy just over half the food it purchased during the height of the pandemic, while donations from grocery stores and food distributors have waned as businesses tighten supply chains and minimize waste.

The Greater Chicago Food Depository, one of the nation’s largest distributors of food to local food pantries, expects this year to get just over a third of the food it received from the USDA during the 2021 fiscal year (July 2020 to June 2021).

While food supplies shrink, inflation is pushing more Americans toward food pantries for the first time. Chicago-area food pantries saw an 18 per cent increase in visitors in July, versus a year earlier, according to the Greater Chicago Food Depository.

In October of 2021, the USDA increased food stamp allotments by updating the Thrifty Food Plan, the agency’s measure of a basket of household grocery items. Food stamp benefits for fiscal year 2022 are on track to reach $114.9 billion, down slightly from 2021 but 36.87 per cent more than in 2020. Food stamps made up less than 2 per cent of US government spending in 2022, according to US Treasury data.

But 18 states that have ended emergency declarations have seen a reduction in SNAP monthly allocation per person, effectively forgoing the additional food stamp funding, according to a Reuters analysis of USDA data.

In August 2022, the agency announced a cost-of-living adjustment beginning Oct. 1, increasing maximum monthly SNAP allotments for a family of four from $835 to $939 a month.

But many who visit food pantries still work or are on social security, disqualifying them from food stamps, like Michael Sukowski, a retired college administration employee whose SNAP benefits were cut due to a monthly pension he receives from the state.

“Social security and a small pension of $153 a month. It doesn’t go very far,” he said. “Half of that goes to paying my rent. Then there’s utilities.”

Nourishing Hope food pantry, which has seen a 40 per cent increase in visitors this year, and other food pantries are now purchasing more food at higher costs. That’s led to inconsistent supplies of staples such as bread, meat and cheese.

“The pickings were slim, so to speak. But I’m grateful I got some stuff,” said Melt as she packed her food items into a pushcart, preparing for a bus ride home.