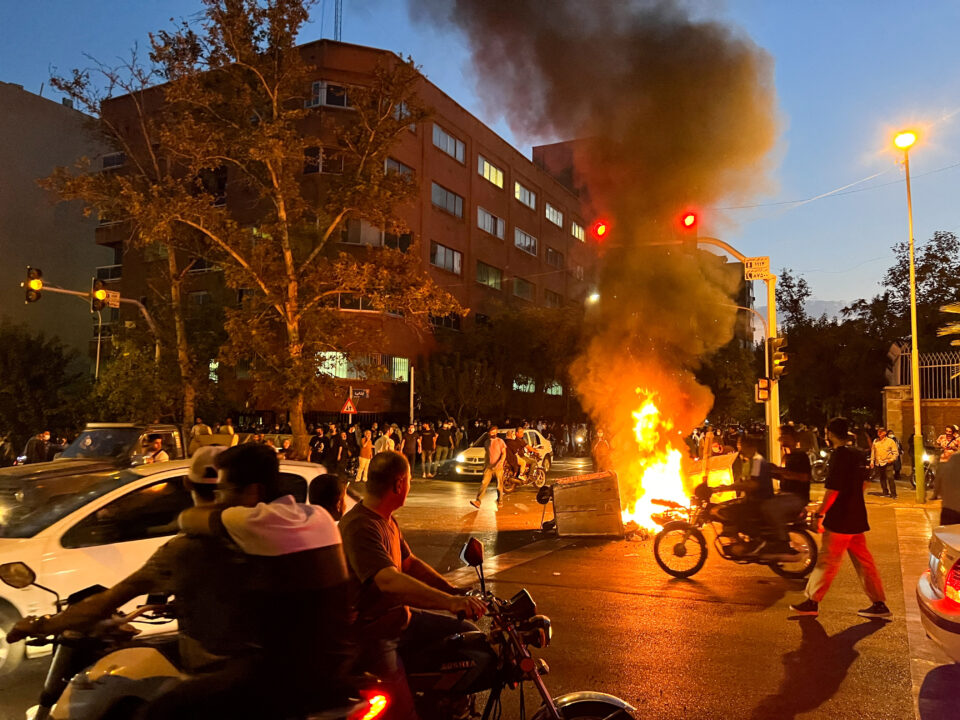 A police motorcycle burns during a protest over the death of Mahsa Amini, a woman who died after being arrested by the Islamic republic's "morality police", in Tehran

Iran faced more international criticism on Monday over the death of a woman in police custody which triggered nationwide protests, after Tehran accused the United States of using the unrest to try to destabilise the country.

Iran has cracked down on the biggest demonstrations since 2019 sparked by the death of 22-year-old Kurdish woman Mahsa Amini on Sept. 16 after she was detained by morality police enforcing the Islamic Republic’s strict restrictions on women’s dress. The case has drawn widespread condemnation.

Canada will impose sanctions on those responsible for the death of Amini, including Iran’s morality police unit and its leadership, Canadian Prime Minister Justin Trudeau said on Monday.

“We’ve seen Iran disregarding human rights time and time again, now we see it with the death of Mahsa Amini and the crackdown on protests,” Trudeau told reporters in Ottawa.

Iran said the United States was supporting rioters and seeking to destabilise the Islamic Republic.

“Washington is always trying to weaken Iran’s stability and security although it has been unsuccessful,” Iran’s Foreign Ministry spokesperson Nasser Kanaani told Nour news, which is affiliated with a top security body, in a statement.

On his Instagram page, Kanaani accused the leaders of the United States and some European countries of abusing a tragic incident in support of “rioters” and ignoring “the presence of millions of people in the streets and squares of the country in support of the system”.

Also on Monday, Germany summoned the Iranian ambassador in Berlin to urge Tehran to stop its crackdown and allow peaceful protests. Asked about the possibility of further sanctions on Tehran in response to the violence, a German foreign ministry spokesperson had earlier said, “we will consider all options” with other European Union states.

Last week, the United States imposed sanctions on Iran’s morality police over allegations of abuse of Iranian women, saying it held the unit responsible for the death of Amini.

Students from the Dentistry Faculty of the University of Tabriz, with the exception of the emergency department, took part in a strike on Monday and refused to participate in classes, said the Human Rights Activists News Agency (HRNA), a news site by a collective of Iranian human rights advocates.

The strikes were conducted to protest against widespread arrests of students and forceful encounters with security forces in Iranian universities, it said.

On Sunday, Iran summoned the British and Norwegian ambassadors over what it called interference and hostile media coverage of the unrest.

The anti-government protests are the largest to sweep Iran since demonstrations over fuel prices in 2019, when Reuters reported 1,500 people were killed in a crackdown on protesters – the bloodiest bout of internal unrest in the Islamic Republic’s history.

At least 41 people have been killed since Sept. 17, according to state TV.

President Ebrahim Raisi has said Iran ensures freedom of expression and that he has ordered an investigation into Amini’s death.

A leading Iranian teachers’ union, in a statement posted on social media on Sunday, called for teachers and students to stage the first national strike since the unrest began, on Monday and Wednesday.

Women have played a prominent role in the protests, waving and burning their veils.

In a video circulating on social media, the sister of a man killed in the anti-government demonstrations, Javad Heydari, cut her hair on his grave in defiance of Iran’s Islamic dress code. Reuters could not verify the authenticity of the video.

The state has organised rallies to try to defuse the crisis.

Although the demonstrations over Amini’s death are a major challenge to the government, analysts see no immediate threat to Iran’s leaders because the elite security forces have stamped out protests in the past.

Iran has blamed armed Iranian Kurdish dissidents of involvement in the unrest, particularly in the northwest where most of Iran’s up to 10 million Kurds live.