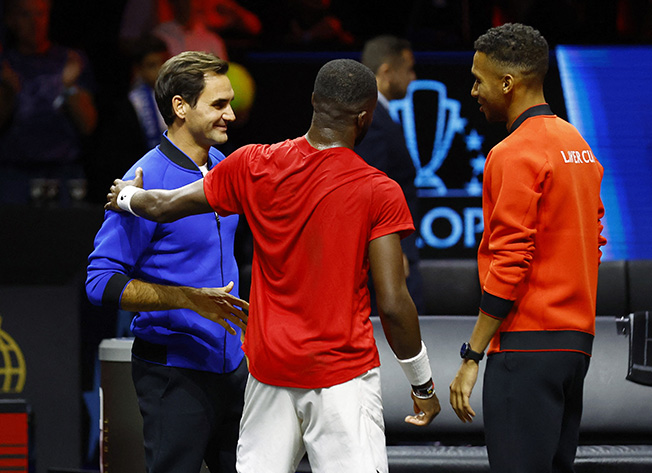 Frances Tiafoe returned to haunt Team Europe with a dazzling win over Stefanos Tsitsipas to give Team World their first Laver Cup title on Sunday, ending Roger Federer’s hopes of finishing his career by lifting another trophy.

Two days after he and Jack Sock beat Federer and Rafa Nadal in a tearful farewell for the Swiss great at the O2 Arena, American showman Tiafoe saved four match points against Tsitsipas before roaring to a 1-6 7-6(11) 10-8 victory.

Tiafoe’s win, worth three points for his team, gave John McEnroe’s Team World an unassailable 13-8 lead, having started the day trailing 8-4 and staring at a fifth straight defeat in the event co-founded by Federer.

Tsitsipas had the chance to take the match to a deciding singles match, but Tiafoe showed tremendous guts to save four match points in a gripping second-set tiebreak.

The American had the pro-Europe crowd in raptures, and his team mates off their feet, with some extraordinary shot-making in the so-called Laver Breaker.

And when Tsitsipas hit the net on match point, Tiafoe collapsed to the court and was immediately buried under a pile of his red-shirted team mates and captain McEnroe.

“It’s an unbelievable feeling,” Tiafoe, who reached the U.S. Open semi-final said on court. “Jonny Mac was dropping F bombs all week saying we need to get it down this year.

“It wasn’t just me but I showed a lot of heart to get this done. I was getting my ass kicked for a while but I kept going. This is big, we’re going to celebrate big tonight.”

McEnroe was ecstatic at finally getting his hands on the trophy and getting one over old rival Bjorn Borg who was captain of a Team Europe side that were big favourites.

“No one beats Team World five times in a row,” the American said. “Felix stepped up big time.

“Frances is prime time, we saw that at the U.S. Open. This is an incredible team event and I’m loving every second of it.”

It was not the ending Federer had dreamed of in the last event of his 24-year professional career.

Apart from playing his last-ever competitive match, he had sat at courtside in every match here, offering his words of wisdom and support to his team mates.

“I was on the team. Almost lost my voice. My hands hurt from clapping. Told Andy (Murray) in the locker room, I don’t like losing. It’s not fun.

“This weekend has been all over the place for me. I enjoyed it, but it’s unfortunate that we couldn’t get the win tonight.”

Tiafoe, beaten heavily by Djokovic the previous evening, was making no apologies to Federer for being the pantomime villain.

“Absolutely not. I’m not going to apologise to him. He’s got a lot to apologise after the last 24 years after beating everybody on the tour,” Tiafoe, clutching a beer, said.

Team World will be aiming to retain their title next year when the event takes place in Vancouver.