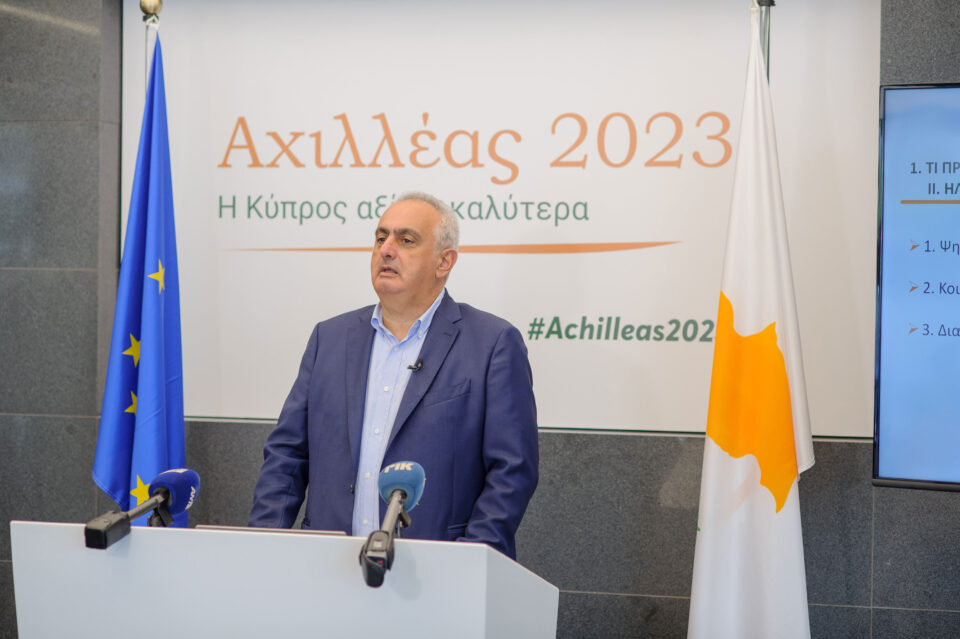 Independent candidate for the 2023 presidential elections Achilleas Demetriades put fighting corruption and the need for more transparency at the top of his agenda as he set out his key proposals on Wednesday.

Demetriades, who presented his proposals for an “honest state, independent authorities and transparency”, said that the problem of corruption during the 10-year Anastasiades administration had reached unprecedented levels, damaging the prestige of Cyprus and its people. He highlighted the golden passports scandal and President Nicos Anastasiades’ involvement.

“Along the way, it became apparent that several ministers – and the president of the Republic himself – had connections with law firms or other offices that benefited from the naturalisations they approved. These acts constitute an unprecedented institutional ‘conflict of interest’,” he noted.

The causes of corruption, he added, are the absence of transparency and rules to prevent conflict of interest, the inability of institutions to function independently and the delay in the administration of justice.

“The slide in corruption indicators is recorded by all authoritative international organisations, Cyprus has been ranked among the ‘flawed democracies’ by the Economist Intelligence Unit, with its worst score in the area of ‘functioning of government’,” he added.

In an effort to remedy the problem, Demetriades proposed ‘Positive Behaviour’ modelled on the Pissarides-Panayiotidis-Syrimi proposal, which are rules to prevent conflict of interest by applying GRECO rules, a code of conduct that binds both the president and his ministers, the resignation of ministers from party offices and transparency in party finances (contributions, management of public funds). He also suggested separating the responsibilities of the Attorney General, one being the legal advisor and the other the public prosecutor.

The presidential hopeful also proposed a radical shake-up of the system for appointing independent officials, with non-binding consultation with parliament and public hearings for officials determined by the Constitution and selection from a list drawn up by a committee of “wise men” – along the lines of the appointment of the Anti-Corruption Authority – for officials of institutions governed by law and for presidents of semi-governmental organisations.

Demetriades also advocated e-governance that would reduce bureaucracy. “Radical reform to speed up the administration of justice by introducing technology, with “the computer on the bench”, digital transcription of transcripts and training programmes,” he said.

He also proposed an index of implementation of laws with annual reports to Parliament for more efficient administration, the introduction of horizontal voting, starting with the 2024 municipal elections, a Citizens’ Assembly for important political priorities of state, as well as the adoption of a strict framework for respecting citizens’ privacy and preventing surveillance.

“Where this principle is violated, legislation should provide effective remedies for those affected and provide for the punishment of those responsible in order to prevent repetition,” he added.

Lastly, the independent candidate proposed the abolition of “absurd” privileges in a bid to close the gap on inequalities – an end to double pensions, tax-free vehicles, an end to limousines, and the transport of officials only for official purposes in hybrid vehicles.

“Change will not come from those who brought us here. They cannot because they are part of the problem of corruption. Change is possible with a new leadership in 2023,” he concluded.