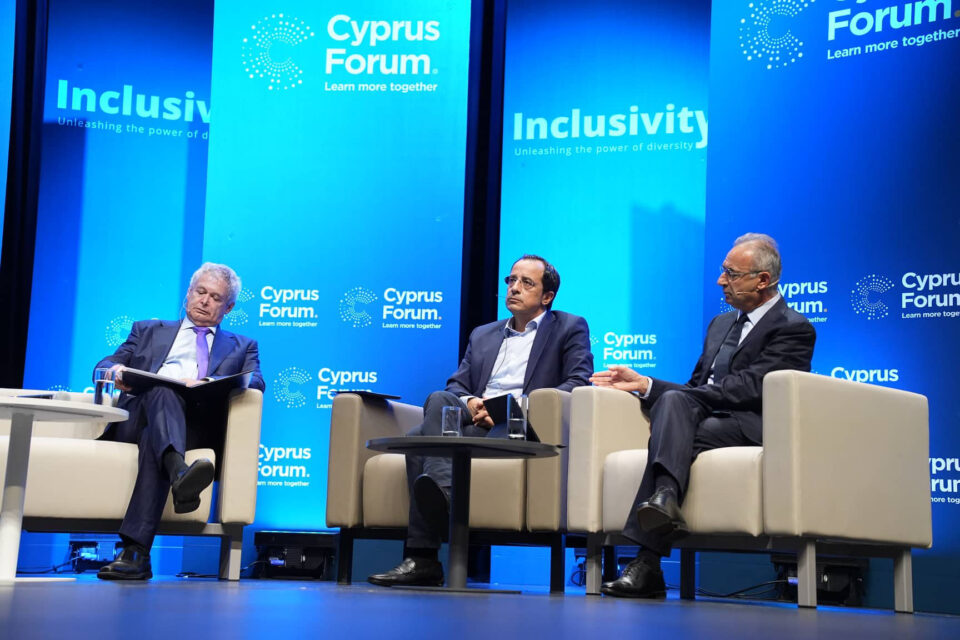 Three of the  presidential candidates said the trust of the Turkish Cypriots needs to be won back, and that more should have been done to invest in their community.

Speaking at the Cyprus Forum on Thursday about where they see Cyprus in the next five years, Averof Neophytou, Andreas Mavroyiannis, and Nikos Christodoulides all agreed that the only solution to the Cyprus problem was the reunification of the island.

Disy candidate Averof Neophytou, under the slogan ‘With a Cyprus solution, Cyprus in Nato’ said that he wants the reunification of Cyprus, within the clear agreed framework that exists in the resolutions and decisions of the UN Security Council.

“We want security for all Cypriot citizens so that all Cypriots feel secure,” he added.

Asked about how he envisions Cyprus in the next five years, Neophytou said that in order to build a vision for the island, “we must first ensure that we have a place. What are we living today? We have an aggressive Turkey that threatens. It is threatening Greece, it is threatening Cyprus. Yesterday, Mr Erdogan gave instructions to increase the occupation troops in Cyprus,” he said.

He also highlighted the global crisis, the energy crisis, and the insecurity due to the war in Ukraine. “Everyone expects this winter to be one of the most difficult winters that humanity has had since World War II. We must face the risks with experience, reliability and efficiency and cross a minefield safely,” he added.

“Once we ensure one entity, one sovereignty, one citizenship, one international personality, autonomy to the two entities, in this way we ensure a strong state in Europe. Our weapon is gas to unlock the Cyprus resolution process,” Neophytou, who has repeated this mantra on various occasions said.

Neophytou reiterated that neither Erdogan nor the current Turkish Cypriot leadership will ever achieve a two-state solution. “But there is something worse. The annexation of the north by Turkey “and for this we should be credible in the international community and stop balancing in two boats,” he added.

Christodoulides said that the EU offers all the safeguards, not only for security and guarantees, but also for the functioning of the state and for the rights of every citizen in Cyprus, noting that Turkish Cypriots are also victims of the invasion. He added that the action of the Cyprus Workers Confederation (Sek) to employ Turkish Cypriots was a very appropriate move.

Christodoulides said that hope and perspective should be given to the young and middle class. “Our young people, today for the first time since World War Two, are at risk of having fewer opportunities than those of their parents.” He added that the health, immigration and economic crises have hit the backbone of the economy, the middle class, which has been shrinking.

In parallel, he said that there is no vision without the resolution of the Cyprus problem. “The illegal status quo, he said, is not only unacceptable but also dangerous. We have before us a European Union, he continued, that reacted to the Russian invasion of Ukraine, and the EU should take a leading role in resolving the Cyprus problem, without ever straying from the framework of the UN basis for a solution,” Christodoulides said.

In response to the same question, Mavroyiannis spoke of the need to regain the trust of the majority of Turkish Cypriots and said that diplomatic manipulations were not enough to re-start efforts to resolve the Cyprus problem. “It certainly requires our firm adherence to the Security Council resolutions and the Guterres framework to start where we left off,” he added.

“We need to rebuild the organic conditions of peace through cooperation, especially among the youth and make full use of the fact that we are in the EU,” he said and noted that an Office for Turkish Cypriot Affairs should be created immediately.

Speaking about how the Turkish Cypriots see their future, Mavroyiannis said that the majority of Turkish Cypriots are interested in reunification, “but we have to convince them that this option is feasible, legitimate and desired by us as well.”

Mavroyiannis said that the next five years are certainly full of challenges for our country and the question that arises and is fundamental is whether we will choose to continue with the same recipes or whether we need to have a major change.

The goal, Mavroyiannis said, is to change the style and ethos of governance and, if possible, this should be done now from the election campaign. He added that, the change must be done by the power of example, starting with us, the public figures. The aim is to serve our country and its people by fighting corruption at all levels, he said.

On the same issue, Christodoulides said that modernisation and reconstruction of the state are intertwined with transparency and the fight against corruption. “We need, through education to build a culture of transparency and cracking down on corruption. Steps have been taken towards digital transformation, but more needs to be done,” he added. He also said that immediate judicial reform is needed.

For his part, Neophytou said that the reforms made in Cyprus bear the stamp of the Democratic Rally. He added that “in 2022, with our country in Europe, we want a functional, executive and fully accountable state”. He said that, there is a possibility that three years from now, all state services will be on the mobile screen. He also spoke of a constitutional revision that will not affect the bi-communal nature of the state.

Asked by the three candidates what they believe are the key parameters for effective management of the migration – refugee issue, Neophytou said that there should be a separation for genuine political refugees. He added that, there should be integration programmes. “To solve the problem, we should increase outflows and reduce inflows,” he said.

The Disy leader added that proper surveillance of the Green Line and bilateral agreements for repatriation of irregular migrants are needed.

For his part, Mavroyiannis said that the procedures for examining applications are lengthy and take six to eight years when they should take at most 2-3 months. “Fences do not stop the problems, on the contrary they add to them,” Mavroyiannis added.

Meanwhile, Christodoulides characterised illegal immigration as a very serious problem facing Cyprus and called on the EU to manage this disproportionate burden and proposed the establishment of a Deputy Ministry of Immigration.