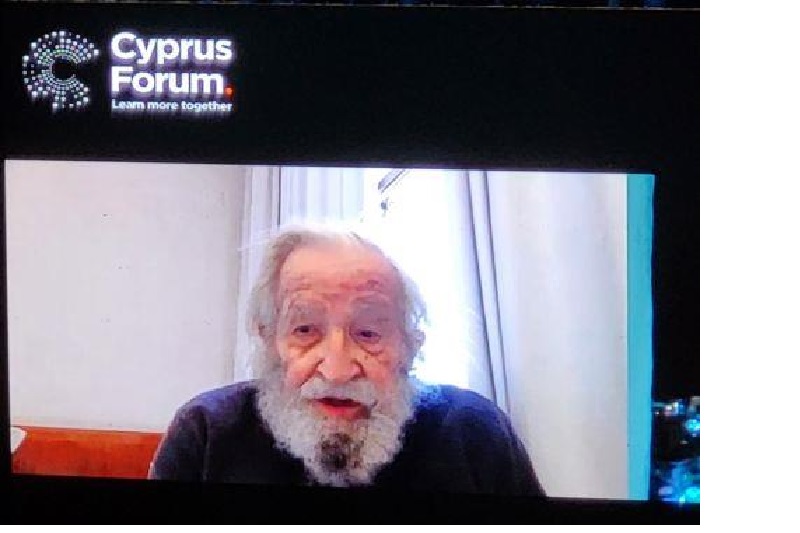 Local problems fall into insignificance in the face of the climate crisis and there only a narrow window to act, Noam Chomsky said in a recorded interview presented at the Cyprus Forum, in Nicosia.

Chomsky was asked about the significance of the US decision to lift an embargo on arms sales on Cyprus, and what this means for Cyprus. He answered that in his opinion, it probably would not have a big effect, since there is “no real issue of defence.”

“Cyprus faces much more serious problems than the local problem of conflict with Turkey”, he said. He mentioned a report that studied the likely prospects for the Middle East region, which showed that by the end of the century, the warming of the atmosphere is proceeding twice as fast in the Middle East as it is in the rest of the world.

“The Middle East has now surpassed the European Union and India in emissions of Green House gases, and the region is a major producer of fossil fuels that are destroying us”, he said. “What is happening in the region is of extraordinary importance and it may destroy human life in the near future. Everything else falls into insignificance. All the local problems will disappear”, he repeated.

He said that a political solution for the Cyprus problem is possible, although there is no easy answer. “It will take a willingness for both sides to reach an accommodation, because there is a much bigger problem in the world”, he said.

He underlined that the great powers, USA, Russia, China, are going to have to find a way to overcome their conflicts to accommodate one another. “If they don’t, human civilization won’t survive. There are very serious pressures facing us, that were never present in human history. It’s natural to focus on one’s local problems, but they are part of a much bigger problem, one that is the very severe crisis of global warming” he said.

He added that another major issue is the increasing threat of nuclear war, which is in the headlines right now and a more serious problem rising is in the Pacific region, with provocations over Taiwan.

“It doesn’t get much reported, but it’s a very serious threat that the US are increasing the provocations over Taiwan”. He said that on September 14th, the Foreign Relations Committee passed almost unanimously a resolution which could become legislation, which calls for destroying the One China Policy, which has kept the peace for 50 years.

This resolution, basically turns Taiwan into NATO partner, increasing arms from US to Taiwan, including it to military exercises and treating it as other sovereign countries, he said. “That is a real poke in the eye to China. If this becomes legislation, we will have another war breaking out, in this region, which means a potential war between nuclear powers, which will destroy everything pretty quickly. That’s the situation”, Chomsky noted, concluding that not only the Greek and Turkish Communities in Cyprus have to find a way to accommodate one another, and reach a settlement, but the great powers as well.

Regarding actions that can be taken, Chomsky proposed that there has to be popular organisation, inside Cyprus, inside the two communities, “people must realise we must come together, the problems we face have no borders”.

“We are now facing the question ‘Will we save organised life on earth?’, a question that it has never risen before in human history”, he said, adding that in Cyprus, the communities must internally organise, to connect and reach an accommodation. He gave the example of Germany and France, which used to be enemies for centuries, but in 1945 they began to become allies in Europe.

However, he mentioned that there is a narrow window for action and there are very feasible proposals. There is not much time, he said, but the means are there, “with a 2-3% of GDP there can be actions to overcome the crisis. But it has to be soon.”

He concluded that there is plenty of hope for a brighter future, if you look what the younger people are doing around the world, organising “rebellions for climate.” “Young people have dedicated themselves to doing things that need to be done to save us”, he said. “People of our generation must listen to them and take up the challenges. It’s a choice”, he concluded.

Noam Chomsky, now 94, is a well-known and renowned American linguist, philosopher, cognitive scientist, historical essayist, social critic, and political activist and author. Sometimes called “the father of modern linguistics”, Chomsky is also a major figure in analytic philosophy and one of the founders of the field of cognitive science.