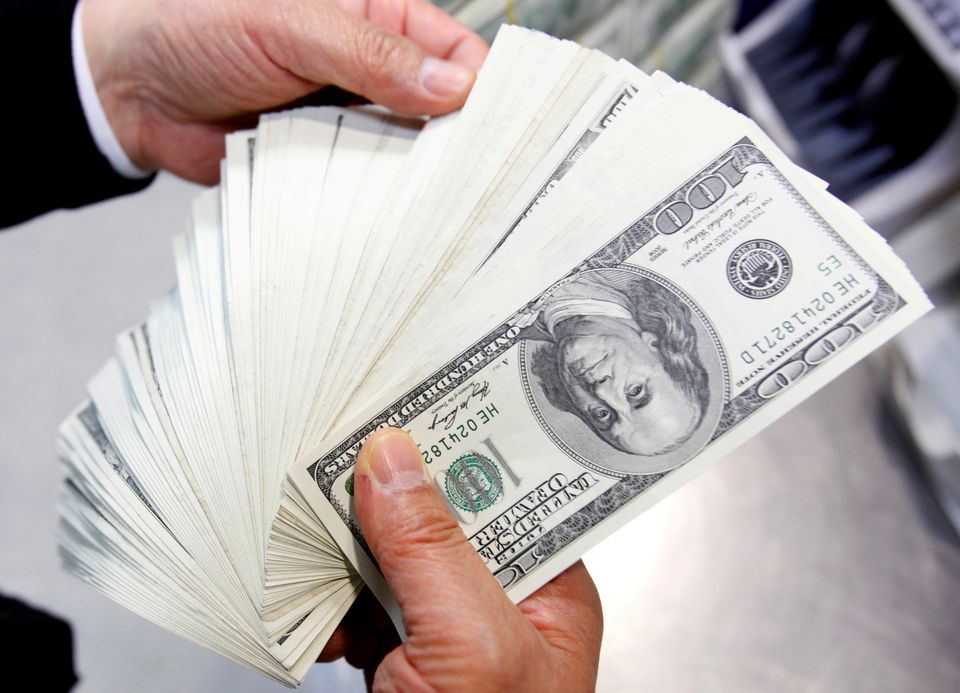 The dollar rose against the euro on Friday but pared gains late in a session that was muddied by quarter-end trading while riskier commodity-led currencies fell sharply after European inflation hit a record high and US consumer spending increased faster than expected.

But while the dollar index was showing its biggest quarterly gain since the first quarter 2015 it was set for its first weekly decline in three weeks.

Sterling rose against the dollar after falling earlier in the day. The pound last showed four straight sessions of gains followed by wild declines on concerns about Britain’s plan to slash taxes and pay for it with more borrowing.

After hitting a record low on Monday, the British currency was on track for a weekly gain after the Bank of England bought British government bonds, known as gilts, on Wednesday, Thursday and Friday.

The US Commerce Department said the personal consumption expenditures price index (PCE), which the Federal Reserve targets at 2 per cent, rose 6.2 per cent year-on-year in August. This gave the Fed less reason to slow down its rate hiking cycle after raising US borrowing costs faster in 2022 than any time since the 1980s.

“Today’s trading is distorted by quarter-end and month-end order flows,” as investors focused on rebalancing portfolios rather than on data said Paresh Upadhyaya, director of fixed income and currency strategy at Amundi US in Boston.

But the strategist expects to see the dollar continue its upward direction as investors revert to trading on fundaments such afundamentalsamentals end.

“At this point you can’t fight the strong bullish dollar trend since its underpinned by counter cyclical factors such as concerns about global growth, geopolitical risk and rising US interest rates,” Upadhyaya said.

Meanwhile, trading in currencies from countries that are heavily dependent on commodities reacted strongly to the hot inflation data on Friday due to concerns about demand and global economic growth, according to Upadhyaya.

The euro was down 0.10 per cent at $0.98055. The dollar index, which measures the greenback against a basket of major currencies, was down 0.08 per cent on the day but on track for a quarterly gain of 7.2 per cent.

But on a weekly basis the index was set for its first decline in three, last down 0.899 per cent.

“The inflation data today surprised higher once again. That will keep upward pressure on interest rates and the dollar,” said Adam Button, chief currency analyst at Forexlive, a currency analysis firm in Toronto.

But at the quarter-end Button also said “fundamental considerations often take a back seat.”

Foreign exchange volatility has surged as investors have fretted about inflation and economic growth in the face of aggressive global monetary tightening. Also fraying nerves has been the Britiah mini-budget fallout and concerns about escalation in the Russia-Ukraine war.

In a sign of the rush for the safety of the dollar, demand for the US currency in derivative markets surged on Friday to its highest since the COVID-19 crisis in 2020.

So far this year, the dollar index has soared almost 17 per cent. For the month, the index was on track for a 3.15 per cent gain, its biggest since April.

The dollar was up 0.2 per cent against the yen at 144.765 , and has been mostly tracking sideways since early September.

Japan made its first yen buying intervention since 1998 last week to prop up its currency. It spent a record 2.8 trillion yen ($19.7 billion), Ministry of Finance data showed on Friday, draining nearly 15 per cent of funds it has available for intervention.

Elsewhere, China’s yuan recouped come losses from from the previous day’s session after Reuters reported the central bank had told major state-owned banks to be ready to support the currency in offshore trading .

The Swiss franc fell after the Swiss National Bank said it had intervened in the foreign exchange market in the second-quarter to support the currency. The dollar rose 1.05 per cent versus the franc.