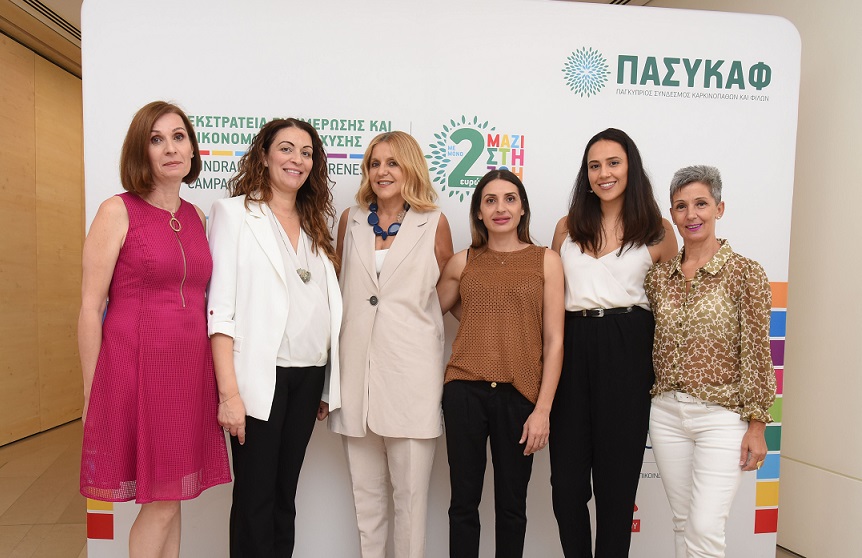 Under the motto ‘Gathering Love, Giving Light’, the Cyprus Association of Cancer Patients and Friends (PASYKAF) held its 2022 press conference at the Leventis Gallery, on September 27.

The event presented PASYKAF’s 31st awareness and financial assistance campaign ‘Together in Life’, which will run throughout October. The campaign will raise funds to maintain, develop and continually upgrade the Association’s services and programmes.

This year, after an absence of two years, roadside fundraising will take place over October 5-9. Contributions will also be possible by

Meanwhile, for the second consecutive year, the All-Day TV Marathon will take place in collaboration with Alpha Cyprus, on Friday, October 7.

PASYKAF President, Dr. Anna Achilleoudi welcomed guests and stressed that “despite the challenges and difficulties we face every day, we all continue ‘Together in life'”.

“For more than 36 years, PASYKAF has pursued better quality of life for our fellow human beings with cancer and their loved ones, and offers it with its free services nationwide,” she continued. “In 2021, we responded to the needs of 6,168 patients and their relatives via 35,162 meetings held throughout Cyprus; all these offerings covered by a budget of 3.5 million euros.”

PASYKAF Executive Director, Nicholas Philippou thereafter made special mention of the Association’s important role and its uninterrupted services to cancer patients and their loved ones. He also thanked all campaign sponsors and volunteers.

Greetings were also offered on behalf of the campaign’s ‘Proud Supporter’ OPAP Cyprus, as well as on behalf of Universal Life by Senior Marketing Officer Emilia Orphanidou, and on behalf of Primetel by Sales Director Evripides Kyriakou. Also present to offer her greetings was Tina Adamou, an individual who has experienced PASYKAF’s services and wished to share her own experience.

PASYKAF’s October ‘Together in Life’ campaign will allow all to join their efforts to make a difference for people with cancer and their families, with the goal for fundraising efforts being to raise 550,000 euros – an amount reachable if everyone contributes at least two euros to the objective.

Also as part of the campaign, PASYKAF is organising events in all districts, which include an EN MBLO dinner, a charity tombola, a ‘Together in Life’ Family Fun Day in collaboration with Petrides Farm, and a 185km ‘Together in Life’ charity hike for PASYKAF by George Stylianou.

There will also be fundraising opportunities at supermarkets and department stores where the public will be able to make a contribution. Fundraising efforts are being conducted in accordance with the provisions of the Law on the Conduct of Fundraising of 2014, under License No. 41/2022, granted by the Ministry of Interior over September 2-December 31, 2022. Every participating volunteer will carry with them due authorisation, with all contributions to PASYKAF being tax-deductible.

Once again, PASYKAF expresses thanks for their campaign contribution to:

Together in life, this year again!

Anyone interested in participating in PASYKAF activities or volunteering for the Association should: