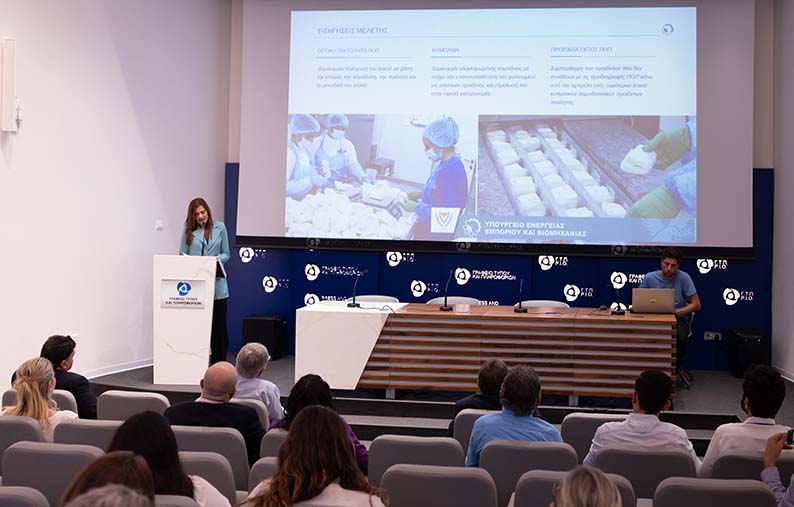 Minister Natasa Pilidou at the launch on Monday

The government has launched a two-year action plan to boost the recognition of halloumi (hellim) as a true Cypriot product and increase exports.

The halloumi.cy website was launched on Monday and offers services in English, Arabic, Chinese and Japanese – detailing the rich history of the cheese in Cyprus, verified producers and recipes. The website is aimed at both ordinary consumers and importers.

In addition to English, Energy Minister Natasa Pilidou said those three languages were chosen as they are viewed as bountiful prospective markets, while the overall aim of the 2022-2024 action plan is to increase awareness of the cheese as a distinctly Cypriot product.

Described as the crown jewel of Cyprus’ agricultural exports, the site detailed that halloumi exports currently total at almost 40 million kilos worth more than €250m a year – traded to over 50 countries. Producers predict that exports could reach over €300m in 2023.

Speaking at the action plan’s launch event, the minister explained that a significant ad campaign will begin across various platforms to promote halloumi’s PDO status (protected designation of origin).

Pilidou said halloumi will be advertised as a premium product – with efforts to consolidate it within “high cooking”.

“We are in close communication with the agriculture ministry, which is the authority for halloumi’s PDO status, and everything will now take place under one umbrella to ensure smoother operations – while also working with the cheese producers,” Pillidou said.

At the event, however, head of the cheesemakers association Yiorgos Petrou expressed the sector’s concerns over competition from the north – alleging that they import feed from Turkey, which is not permitted by the EU.

He further claimed that they will produce milk at cheaper rates which will undercut producers in the government-controlled areas.

Agriculture Minister Costas Kadis said the concerns were perfectly valid but stressed that the control and checks will be very strict. He explained that the Bureau Veritas is an international organisation which will assist in the checks, he said, adding that there is no doubt as to their capabilities to do so.

The website offers insightful details of halloumi’s 1,500 year history, such as Venetian reports in 1554 referring to it as “caloumi” and the key role it has played in local culture – illustrated by it having garnered surnames such as “Halloumas, Halloumakis and Halloumis”.

The site also offered a brief market overview of halloumi:  in 2010, Europe accounted for 75 per cent of total exports, of which about 43 per cent went to the UK.

“Today halloumi is exported to more than 50 countries, with the main export markets being the UK, Sweden, Germany, Australia, Austria, Denmark and Poland. These seven markets account for 81 per cent of total halloumi exports internationally. It is worth mentioning that from 2016 to 2021, halloumi exports increased by more than 30 per cent,” the site explains.