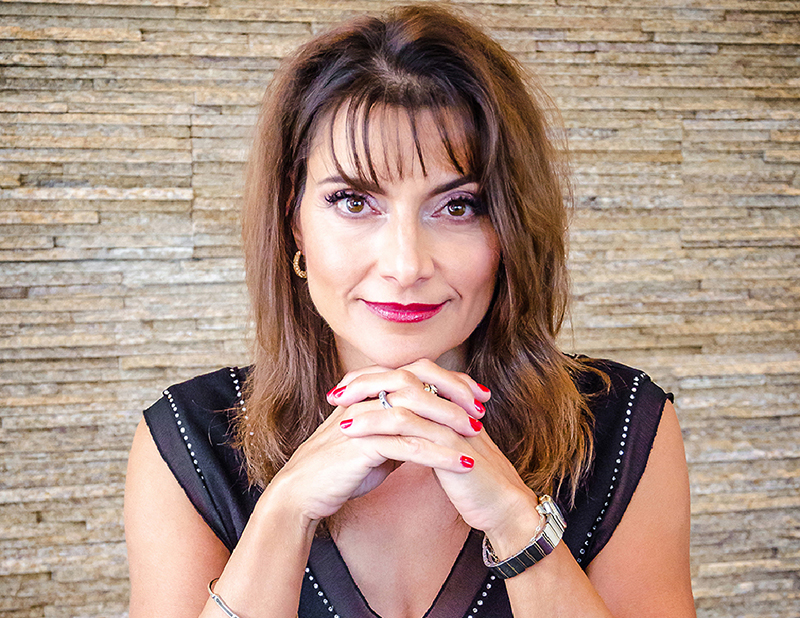 Ever since that pivotal moment when she first put pen to paper, Anna-Maria Athanasiou’s passionate love stories and characters have won the hearts of her readers, catapulting her books into the top ten of Amazon’s contemporary romance best sellers list. Not bad for a woman who never though she would finish her first novel, much less have it published.

Anna-Maria does not flaunt her accomplishments, and even appears embarrassed by praise. Yet, this warm and genial individual is currently working on her eighth book from her home in Limassol, the latest instalment in her highly successful series of romantic novels that have even caught the attention of British the Daily Mail and lifestyle magazine Woman’s Own.

Throughout her life, Anna-Maria had often imagined scenarios and stories in her head, hoping that one day she would put them on paper. In 2011, she finally started writing down an idea that had been in her mind for almost ten years; an idea that eventually mushroomed into 900 pages featuring moments of sex, passion, emotion and suspense with a narrative intriguing enough to keep readers engrossed in the storyline.

“I was secretly writing the book,” Anna-Maria recalled. “I confided in a close friend, thinking it was a ridiculous idea as it was unfamiliar ground for me. Thankfully, my friend encouraged me to continue my writing, and I have never looked back.”

When Anna-Maria completed her steamy novel, she passed it on to her toughest critic, her mom, knowing that she would give it the “as honest as it gets” review. “A few days later, I received a call from my mother who described the book as ‘moving, emotional and engaging,’ and that made me believe the impossible was possible.

“My brother forwarded it to a publisher, and they immediately accepted me. I never in a million years imagined that my first book would be published, yet here I am, eight novels later.”

Anna-Maria recalls how she was overwhelmed by the initial response, and the positive feedback from so many of her readers who connected with the story on many levels. “It was both surreal and very fulfilling, as I did not realise that writing a book would afford me the success of connecting with people, which outweighs everything else for me,” Anna-Maria told Living.

In her first series of books, Waiting for Summer, which is set in Cyprus, the main character Sylvie has her perfect existence turned on its head and her heart broken. She then decides once and for all to be bold and take control, which ultimately leads to tragedy. “Waiting for Summer is Sylvie’s journey into a future she never imagined was conceivable, to happiness she never imagined she would ever know, and to an unexpected man who erases her deep-seated doubts with his unconditional and irrevocable love”.

Anna-Maria believed her regimental approach to life would reflect in her writing. However, when it comes to putting pen to paper, she always completes the first and end chapters before working out the intricacies in between. “My approach includes writing countless notes on scrap pieces of paper, recording ideas onto my phone, and then piecing the story together.”

Her second series of books, a trilogy titled, La Casa d’Italia, are page-turners, with plenty of laughter, drama, love and pain that keeps readers on the edge of their seats. “It is a story of new beginnings and allowing destiny to handle the rest.”

The wonderful reception her novels have received from the local community has pleasantly surprised Anna-Maria. “Many foreigners, expats, and friends are addicted to the books, and I occasionally get stopped in supermarkets by readers who recognise me, which makes me very happy.”

After taking a year off from writing, Anna-Maria is now working on her eighth book, which she hopes to have published by next summer. “I still adore the genre I write in. I appreciate the romance, the fantasy and the escapism. In the same way that my characters develop into better people, I hope my works encourage readers to become the best versions of themselves.

“I think it is important to be level-headed in life. Never let success get to your head and failure to your heart, and not to be affected by negativity,” Anna-Maria said. “There are many important life lessons one can learn from romance novels. Romance helps grow our understanding of other people, and encourages empathy, and that is very important.”

A good night’s sleep is a tonic to remember