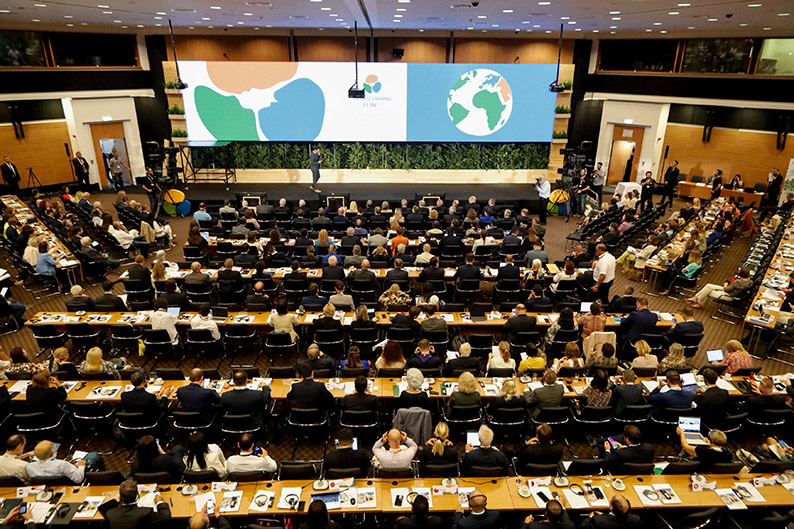 Delegates at the conference

Despite the progress made, more action is still needed to address the impacts of climate change in the European region, according to the 7th pan-European environmental assessment, presented on Wednesday to European ministers in Nicosia at the 9th ministerial conference on the Environment in Europe.

UNEP executive director Inger Andersen said that the science is undeniable and that the only way forward is to ensure a clean and green future.

“We know what we need to do and we need to act together. As citizens feel the pressure and face higher energy bills than ever before, as they see record temperatures and their water reservoirs shrink, and as the continent faces other profound challenges, countries must show there is a plan,” she said.

The report calls for greater action to address “the triple planetary crisis” affecting climate, nature and pollution, the effects of which are affecting more than ever before the lives and well-being of people in the pan-European region, it says.

On air pollution, it says some progress has been made in recent years through the implementation of policies but greater efforts are needed to tackle it as it “remains the biggest health risk in the region”.

The report also states that while all countries in the pan-European region are committed to reducing greenhouse gas emissions, net emissions are still increasing.

“The reductions, achieved mainly in the western part of Europe (2014-2019), are offset by the increase in emissions in the rest of the region,” the report says. It adds that renewable energy use increased in 29 countries in 2013-2017, but the region still relies heavily on fossil fuels – accounting for around 78 per cent of total final energy consumption.

For this reason, it suggests governments should remove or reform “harmful” subsidies and incentives, as it says all countries in the region continue to implement fossil fuel subsidies, and develop effective incentives to deepen decarbonisation by shifting investment towards renewable energy.

Meanwhile, the report highlights the importance of cooperation as key to addressing water challenges since pollution and discharges of urban and industrial wastewater remain significant and persistent organic pollutants are a public health concern. “River basins, lakes and aquifers are subject to multiple pressures and climate change poses additional challenges to freshwater quantity and quality, such as floods, droughts, water-borne diseases and biodiversity changes in aquatic ecosystems.”

The report suggests that, along with enhanced measures to conserve water, improve water use efficiency and use natural solutions for water retention basins, the potential of unconventional water sources such as recycled water should be explored.

The report also refers to the importance of the circular economy, noting that even where there is a strong political commitment to a circular economy, as in the European Union and other Western European countries, “the amount of waste produced continues to increase”.

“In the last half century mineral extraction has tripled globally, with the extraction and processing of natural resources accounting for more than 90 per cent of biodiversity loss and water stress and around 50% of climate change impacts,” the report stated.

According to the data, recycling rates vary significantly between countries and are particularly low in Eastern Europe and Central Asia, the report says, adding that municipal waste recycling rates above 45 per cent exist only in a few EU countries and Switzerland. “Collection and recycling of e-waste is extremely poor in all sub-regions,” it says.

In response, governments are urged to step up waste prevention in production, consumption, repair, renovation and reconstruction, including through financial incentives such as tax breaks. “A pan-European e-waste management partnership would allow the recovery of valuable resources,” it adds.

The report also urges governments to encourage the development of green finance and consider environmental protection spending in the broader context of environmental and public finance, while sustainability should be at the heart of infrastructure development.

Andersen concluded that this assessment can be a guide to reducing emissions, a healthier environment for people and nature, and better waste management and cleaner air.