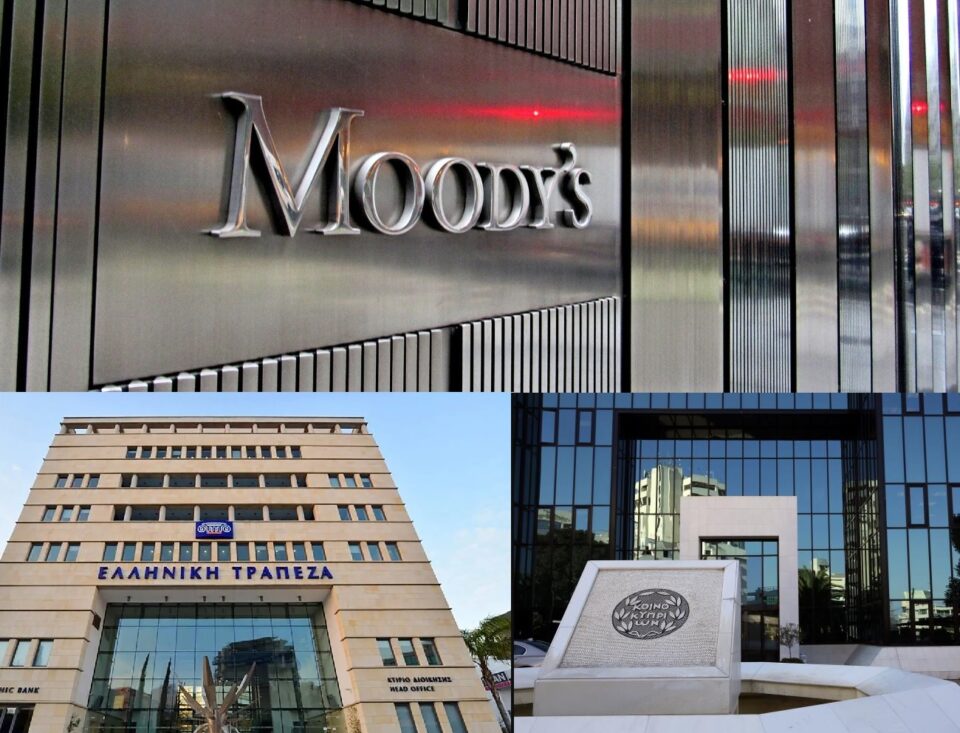 Ratings agency Moody’s on Wednesday announced that it has upgraded the Bank of Cyprus and Hellenic Bank’s long-term ratings, including their long-term bank deposit ratings to Ba2, from Ba3, and their Baseline Credit Assessments (BCAs) to b1, from b2.

The agency also said that the outlook on both banks’ long-term deposit ratings remains positive.

“The main driver for today’s rating upgrade is the resilience of the Cypriot economy, which is supporting the operating conditions of the banking system,” the agency said, noting that this has led it to raise the macro profile of Cyprus to “Moderate-“, from “Weak+”.

“The positive outlooks reflect Moody’s expectations that the two banks will strengthen their profitability, in the context of the higher interest rate environment, and will continue to improve their asset quality, despite potential new nonperforming loans (NPL) formation,” the agency explained.

“The positive outlook on the banks’ long-term deposit ratings also reflects a potential higher buffer from more junior instruments, as the clarity and certainty around their future debt issuances improves,” it added.

Moody’s took into account the fact that Cyprus’ economy has seen a stronger-than-expected resilience to Russia’s invasion of Ukraine (Caa3 negative), and has recovered well from the pandemic shock, indicating no permanent damage, as non-tourism-related services and authorities’ support measures stabilised the economy and mitigated the impact of the shock.

Moreover, the agency said that it expects growth for Cyprus this year, to the tune of 4.8 per cent, followed by a growth of 2 per cent in 2023.

Subsequently, Moody’s said that Cyprus’ growth outlook remains solid, with potential GDP growth estimated to be in the range of 2.5-3.0 per cent.

“Moody’s notes that credit conditions have improved in recent years, with a significant drop in system nonperforming exposures (NPEs) to 11.2 per cent of total domestic loans and advances in June 2022, from a peak of 49.8 per cent as of May 2016.” the agency said.

“The rating agency however notes that challenges remain as a result of still-high levels of indebtedness and the legal framework governing foreclosures that remain vulnerable to frequent political interference,” it added.

For the Bank of Cyprus, Moody’s explained that the positive outlook on the long-term deposit and senior unsecured debt ratings reflects its expectation that non-performing exposures and foreclosed real estate assets will continue their downwards trajectory. In addition, there is an expectation that profitability will strengthen further, supported by the higher interest rate environment and the bank’s cost-cutting initiatives.

“Moody’s expects Bank of Cyprus’ profitability to benefit from the increases in the European Central Bank (ECB)’s policy rate, primarily as the bank’s significant cash balances with the central bank (around €9.9 billion or 38 per cent of assets as of June 2022) reprice immediately,” the agency said, noting that at the same time, deposits will reprice slower and by less, given the bank’s excess liquidity.

As a result of the above, the bank expects to reach a return on tangible equity of over 10 per cent in 2023, two years ahead of schedule.

“The positive outlook on the long-term deposit rating also reflects a potential higher buffer by more junior instruments, as the clarity and certainty around the bank’s potential future debt issuances improves,” the agency stated.

In terms of Hellenic Bank, the agency explained that the positive outlook on the long-term deposit and senior unsecured debt ratings reflects Moody’s expectation that NPEs will continue their downwards trajectory and profitability will strengthen, supported by the higher interest rate environment.

“Moody’s expects Hellenic Bank’s profitability will benefit from higher interest rates, given its large balances with the ECB of around €6.9 billion as of June 2022, equivalent to 36 per cent of total assets, that will reprice immediately following any rises in interest rates,” the agency said.

“More gradually, the investment of its large portfolio of bonds, an additional 24 per cent of assets, will also increase net interest income as maturing bonds are invested in higher-yielding bonds with a similar credit quality,” it added.

At the same time, Moody’s noted that deposits will reprice slower and by less, given excess liquidity.

“Hellenic Bank estimates that net interest income will increase by more than €130 million (or around 0.7 per cent of assets before tax) by 2023 onwards,” Moody’s said.

“The positive outlook on the long-term deposit rating also reflects a potential higher buffer by more junior instruments, depending on the bank’s potential future debt issuances,” it concluded.