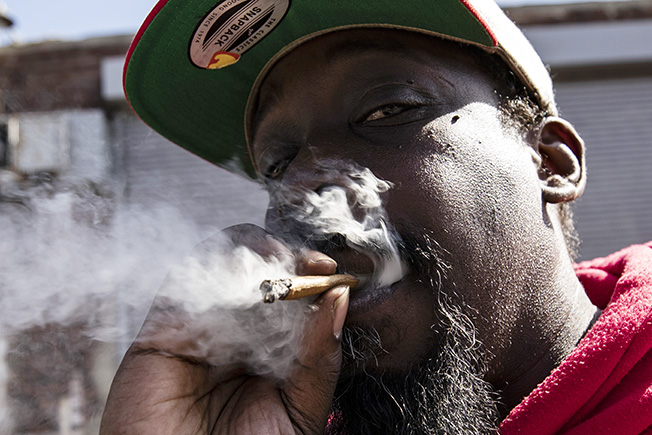 A man smokes a joint as he attends a block party organised by California Cannabis for marijuana day, or 4/20, in Los Angeles, California,

President Joe Biden took steps to overhaul U.S. policy on marijuana on Thursday by pardoning thousands of people with federal offenses for simple marijuana possession and initiating a review of how the drug is classified.

Biden said thousands of people with prior federal convictions could be denied employment, housing or educational opportunities and his executive action would relieve such “collateral” consequences.

Nearly 40 U.S. states have legalized marijuana use in some form, but it remains completely illegal in some states and at the federal level. Reclassification would be a first step toward wider legalization, a move backed by a majority of Americans, and usher in sweeping changes for companies and law enforcement and impact millions.

The president’s decision fulfills a campaign promise and is likely to please members in his left-leaning political base ahead of the November midterm elections in which the president’s fellow Democrats are defending control of the House of Representatives and Senate.

“Too many lives have been upended because of our failed approach to marijuana. It’s time that we right these wrongs,” Biden said.

A senior administration official said more than 6500 people with prior federal convictions could be affected by the pardons.

Supporters welcomed the move and its impact on racial imbalances in the U.S. justice system.

“They were thrown behind bars for years on end for simple possession, a non-violent offense, for a substance that red states and blue states are now legalizing at a furious clip.”

Some Republicans, who U.S. voters prefer over Democrats for addressing crime-related policies, criticised it.

“In the midst of a crime wave and on the brink of a recession, Joe Biden is giving blanket pardons to drug offenders— many of whom pled down from more serious charges,” Republican Senator Tom Cotton said on Twitter. “This is a desperate attempt to distract from failed leadership.”

The results of a classification review could have wide ramifications. At present, the drug falls under the same classification as heroin and LSD and is in a higher classification than fentanyl and methamphetamine, the president said.

If marijuana classification were to ease at the federal level, that could allow major stock exchanges to list businesses that are in the cannabis trade, and potentially allow foreign companies to begin selling their products in the United States.

While many states have legalized the medical or recreational use of cannabis, its illegal status under U.S. federal law has forced most major banks to deny their services to cannabis-related businesses.

The issue has forced U.S. marijuana companies to trade their shares over the counter or by listing in Canada, with the Nasdaq and New York Stock Exchange prohibited from listing them.

The president’s action drew praise from some members of Congress and from the industry.

“The Progressive Caucus applauds this action by President Biden today to advance criminal and racial justice,” said Representative Pramila Jayapal, who chairs a group of left-leaning lawmakers, in a statement.

“This represents a major step in righting the wrongs of the past and amending policies that have negatively impacted so many,” said Khari Edwards, head of corporate social responsibility at Ayr Wellness Inc, one of the top U.S. cannabis retailers.

Biden said he had directed Attorney General Merrick Garland to develop an “administrative process” to issue certificates of pardon to those who are eligible.

“The Justice Department will expeditiously administer the President’s proclamation, which pardons individuals who engaged in simple possession of marijuana, restoring political, civil, and other rights to those convicted of that offense,” the department said in a statement.

Biden said certain rules needed to stay in place even as regulations around the country loosened.

“Finally, even as federal and state regulation of marijuana changes, important limitations on trafficking, marketing, and under-age sales should stay in place,” Biden said.

The global cannabis industry is forecast to hit $55 billion in sales by 2026, with the U.S. market growing to $40 billion by then, up from $25 billion last year, according to cannabis focused research firm BDSA’s September projections.