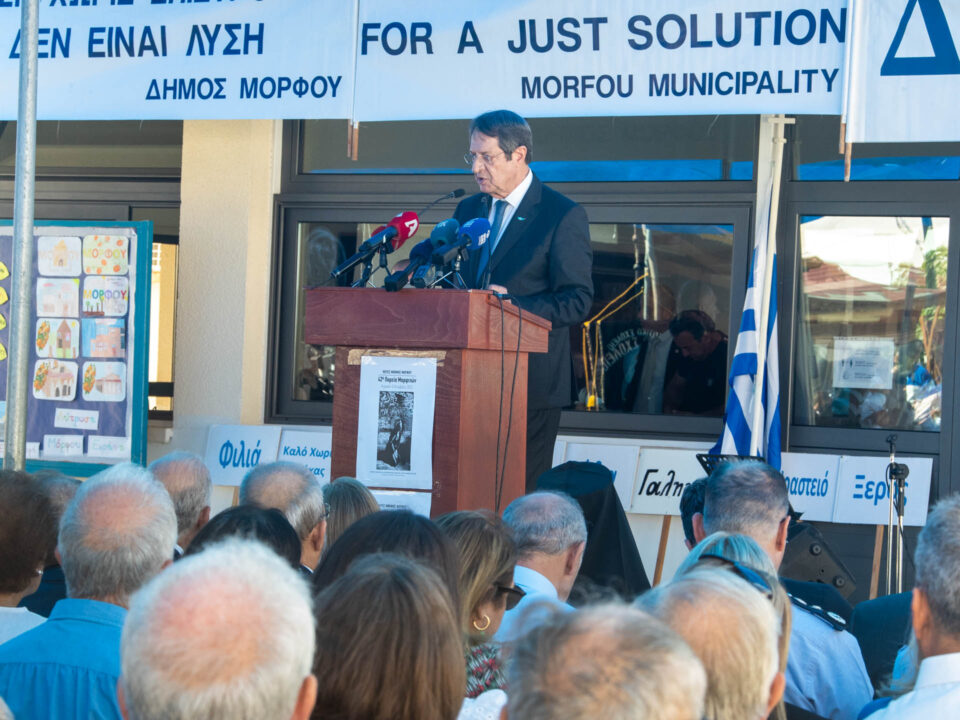 As long as the international community, including the EU turns a blind eye to Turkey’s belligerence, it rewards the aggressor, President Nicos Anastasiades said on Sunday, warning that this tolerance would bring about a military confrontation between Nato allies Greece and Turkey.

Anastasiades, who was addressing an anti-occupation event by Morphou residents in Astromeritis, said nothing else could explain the behaviour of Turkish President Tayyip Erdogan.

Drawing parallels with Russia and Ukraine, he said there could not be any absolution for a country that invades another illegally, that violates international law and every principle of European values ​​and ideals.

His beef was not with the Turkish Cypriots, he said, adding that the Greek Cypriots had acted in good faith and not ignoring their concerns “however unjustified they may be”.

“It should be understood that as long as the international community, as long as the EU – and I say this boldly – turn a blind eye, accept or tolerate Turkish behaviour it is like rewarding the bully who wants to be seen as a victim,” Anastasiades said.

“The behaviour of Mr Erdogan cannot be explained otherwise. It is the tolerance of Europe that allows it. Otherwise, he would not have had the audacity before the UN, but also at yesterday’s meeting in Prague… to show that he does not seek the solution of any problems in a friendly way with the neighbouring states on the basis of international law.”

Anastasiades questioned which aspect of international law allows Turkey to threaten the territorial sovereignty of Greece or ignore UN resolutions, or allows a minority community to determine the decisions of the majority.

Speaking to the media after the event, Anastasiades said that diplomatic representations were being made to the UN and the EU over Turkey and the Turkish Cypriot side’s increased push to seek recognition of the breakaway state in the north.

“All of the necessary diplomatic representations are being made to the UN, to the EU, for everyone to realise that there can be no further tolerance for the unacceptable Turkish machinations, which are none other than cementing, if you like, the faits accomplis sought by Turkey,” the president said.

Anastasiades said there was no question on the part of the Greek Cypriots of choosing the path of armed confrontation.

“I must make it clear, we are not a belligerent people. On the contrary, with our proposals we try in every way to convey the message that through a creative dialogue, always within the framework of international law and especially the European acquis, a solution can be found that will benefit Greek Cypriots, Turkish Cypriots, but also Turkey,” he added.

Asked if he would respond to Turkish Cypriot leader Ersin Tatar’s counter-proposals, the president said he was not prepared to concede to what Tatar seeks.

He said he had put forward some substantial proposals for confidence-building measures, which would create trust between the two sides and pave the way for a new dialogue.

“Unfortunately, Mr Tatar’s counter-proposals are aimed only at debating how to establish their aspiration for the creation of two states. Therefore, I am not prepared to contribute in this direction,” the president said.

Quizzed on his brief encounter with Turkish President Tayyip Erdogan on the sidelines of an EU summit in Prague last Thursday, Anastasiades said that “out of courtesy, he was sitting with other European partners, friends, I greeted the rest, it was impossible not to greet him”.

Within the framework of civilised discourse, he said, they greeted each other and shook hands.
“I felt that it was good to recall the need to finally have a meaningful dialogue, that the time has come, instead of threats, instead of creating faits accomplis, to create the prospects for a solution to the Cyprus problem that will pave the way for Turkey as well in terms of, if it has, European orientations,” Anastasiades said.

During the encounter, Erdogan said later, he told Anastasiades it was not the right time to bring up the Cyprus issue, and especially with a president who would not be still in office an a matter of months.

Asked his opinion on the elections in Turkey next year, Anastasiades said: “Allow me to avoid predictions. I have been watching what is happening inside Turkey, unfortunately it is not only Mr Erdogan who is making unacceptable claims, but we are unfortunately also seeing them adopted by the opposition parties. Therefore, it is unpredictable”.

Anastasiades said what was required was for Turkey to realise that it cannot fail to have a cost when it threatens European countries, openly and without any reason such as Greece and Cyprus, nor can it carry out provocations in the island’s exclusive economic zone and in the fenced-off town of Varosha.

“The claim that it is supposed to seek an amicable settlement between neighbouring countries on the basis of international law is contradicted by the very actions it takes,” he said.

What goes on behind the stage