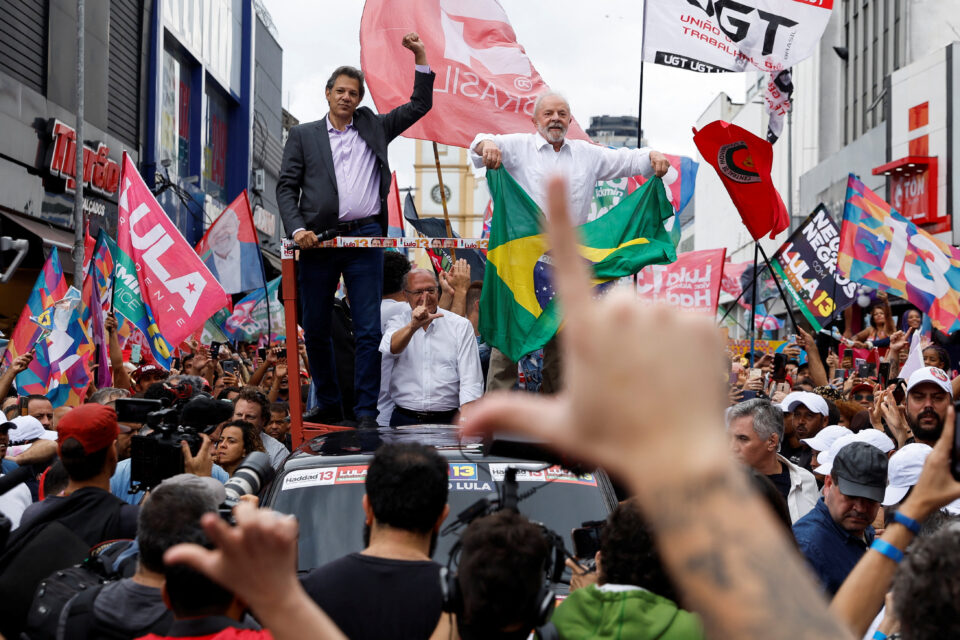 The reports about Luiz Inácio ‘Lula’ da Silva’s impending comeback as Brazilian president verged on the ecstatic in the week before last Sunday’s vote. He was after all, fourteen points ahead of his populist rival, incumbent president Jair Bolsonaro, in the last opinion poll before the vote.

“Lula on track for stunning political comeback,” said one paper. “Olé, olé, olé! Lula voters sing for a heroic comeback to banish Bolsonaro,” said another. Speculation was rife that Lula would win more than 50 per cent in the first round of voting, avoiding the need for a runoff vote between the two leading candidates on 30 October.

But the polls were wrong. Lula got a respectable 48 per cent of the vote, but he was only five points ahead of Bolsonaro at 43 per cent, and in Brazilian politics the candidates in the lead often fall behind in the second round. The long anticipated global decline and fall of the hard-right populist movement has been at least postponed.

This is particularly relevant to the United States, where Donald Trump constantly praises Bolsonaro as ‘Tropical Trump’. Lula is to the left of Joe Biden, but both men are ageing stalwarts of the centre-left who have made political comebacks but already feel a little bit like yesterday’s news.

Both men have essentially promised a return to the sensible, moderate centre-left politics of yore, and that doesn’t seem to be setting hearts aflame in either country. To be fair, however, Lula bears an additional handicap: a criminal conviction.

I spent a whole day with Lula long ago in São Paulo’s car-making suburb of São Bernardo do Campo, when he was genuinely a horny-handed son of toil and a trade union organiser. He certainly seemed to be an honest man then, even a poor man, but he was freed from jail only last year after serving part of a twelve-year sentence for corruption in office.

It wasn’t a lot of money and the charges may have been trumped up: the judge who brought them and sent Lula to jail, Sergio Moro, was later given a post in Bolsonaro’s government as justice minister. On the other hand, Lula was not exonerated last year; he was released because of procedural irregularities in the case. He could even face trial again.

So there is no clear evidence that the populist wave is subsiding. Bolsonaro could get a second term, Trump could come back in the United States, Modi is not losing his grip in India. Orbán won a landslide re-election victory in Hungary last month, a hard-right coalition won last month’s election in Italy, Boris Johnson might even make a comeback in the UK.

The driving force in this populist wave is a thinly disguised alliance between a very rich elite and the resentful, downwardly mobile parts of the old middle and working classes. The emotional cement that holds it together involves a strong dose of extreme religion, deep social conservatism (e.g. homophobia), ultra-nationalism and anti-immigrant sentiment.

Not every element is present in every country. Religion is not a big part of populism in England; immigration is not a major issue in Brazil or India. But fear and scapegoating of minorities is almost universal, and an abundance of lies and endless ‘culture war’ distractions serve to paper over the cracks in this cynical alliance of opposites.

Populism will be with us for some time yet, and it may even spread a bit. Turkey’s President Recep Tayyip Erdoğan may cover the rest of the distance to full populism as the country’s economic problems worsen, and France might have gone full populist last year if the French hard-right parties had managed to cooperate. But that’s only half the story.

The other side is parties of the democratic left that are winning power in almost all the rest of Latin America – Alberto Fernández in Argentina (2019), Luis Arce in Bolivia (2020), Pedro Castillo in Peru and Gabriel Boric in Chile (2021), Xiomara Castro in Honduras (2022), and most recently Gustavo Petro in Columbia.

It’s also noteworthy that only three of the European Union’s 27 members currently have populist governments: Italy, Poland and Hungary. Moreover, the new Italian coalition may not last long, and Poland’s populism is for domestic affairs only: Polish populists are not admirers of Vladimir Putin.

And neither Lula nor Biden has lost their next elections yet.