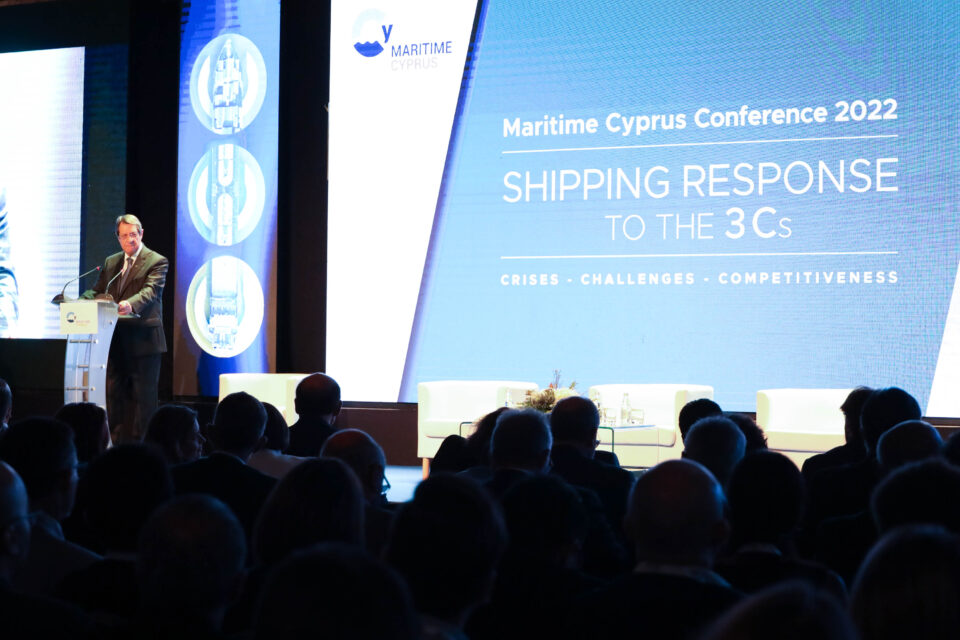 Cyprus has established itself as a competitive and modern international shipping centre, President Nicos Anastasiades said on Monday, kicking off the Maritime Cyprus conference.

Cyprus has established itself as a competitive and modern international shipping centre, President Nicos Anastasiades said on Monday, kicking off the Maritime Cyprus conference.

“We feel very proud of our achievements, which have placed our small country in a privileged position on the world’s shipping map,” he said, highlighting the 2018 establishment of the deputy shipping ministry as an important decision.

“A decision aimed not only at establishing an organisational structure that could respond immediately and efficiently to unpredictable challenges, but would also allow, through reforms, digitalisation and minimising bureaucracy to further strengthen the attractiveness of an already thriving sector”.

The president said that at the moment around 300 shipping companies are based on the island, covering a full range of activities, while the number of companies registered under the Republic’s tonnage tax system has tripled from 95 to 285 in the past decade.

He then went on to detail the deputy ministry’s long-term strategy for shipping called SEA Change 2030, which contains 35 actions aiming to further advance Cyprus’ role in international shipping as a sustainable maritime centre, enhance safety and security for Cyprus flagged ships, and provide better services to external stakeholders.

The president also spoke of recent developments in shipping, such as green tax incentives to shipowners and operators, the establishment of an autonomous admiralty court and work to finalise the legal and procedural framework for arbitration and mediation on maritime disputes.

“Since the international geopolitical environment is fluid and unpredictable, we need to effectively respond to crises unfolding, such as the one we are currently facing following Russia’s invasion of Ukraine,” he said.

Seeking to clarify Cyprus’ position on sanctions against Russia, he said that like Ukraine, Cyprus is also victim of an invasion, therefore “we immediately and without hesitation agreed to the adoption of targeted sanctions vis-à-vis Russia in an effort to reverse its actions and return to dialogue”.

The president pledged the government’s constructive participation in the International Maritime Organisation (IMO), also saying Cyprus would continue to positively contribute to the formulation of EU legislation on shipping “to ensure [it] is safe, environmentally sustainable, competitive… and an integral part of our efforts of achieving energy independence and carbon neutral economy”.

Commenting on the conference, he added that this year’s participation has exceeded previous ones, with more than 900 delegates from 35 countries.

He said that delegates have praised Cyprus’ efforts to develop the sector and its positive contribution to global shipping through actions and initiatives and through its national strategy.

He welcomed the presence at the conference of the secretary-general of the International Maritime Organisation Kitack Lin and the European transport commissioner Adina Valean, as well as other important people of the global shipping community, saying that their presence in Cyprus is an indication of the importance of Cypriot shipping.

Shipping, he pointed out, must become greener, contribute to addressing climate change, adding that at the same time, regulatory authorities and industry, must work to maintain its competitiveness.

“Particulary in Europe, a strong shipping ensures what we all have to strive for, an energy-independent Europe, with an economy without fossil fuels, a green economy, which will be able to address future challenges,” he said.

He added that Cyprus is the only country that has implemented green tax incentives to enable ship owners and ship operators, through their practices, to reduce emissions of pollutants, and said that in the coming period we will also take initiatives so that to form global solutions in shipping at an international level.

Asked whether delegates have expressed concerns about the energy crisis, the deputy minister said that there are thoughts as to whether the efforts to decarbonise shipping should be accelerated or slowed down because of the Ukrainian crisis and sanctions.

Commenting further, he said that Cyprus is contributing to this direction by already actively participating within the EU Fit for 55 package of measures, but also through its participation in the IMO “so that with its proposals to contribute, so that shipping can move forward, through this difficult transition period, to use fuels of non-fossil origin but also other measures.”

The conference, organised by the deputy ministry of chipping, the Cyprus shipping chamber and the Cyprus union of shipowners, is set to last until Wednesday.