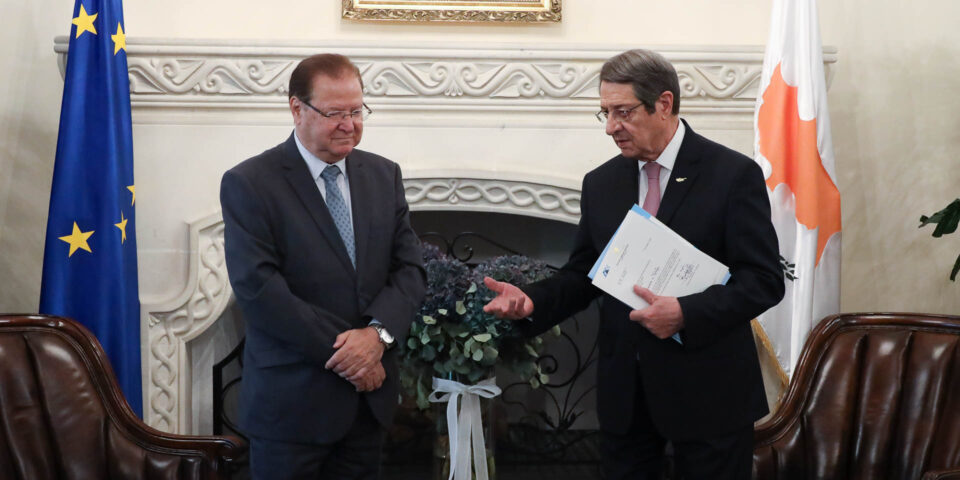 Both correct and wrong decisions were made during his term as leader, President Nicos Anastasiades said on Tuesday while receiving a copy of the annual report from the public service commissioner.

“The countdown to the end of the term has begun and I will be watching the country’s progress from afar. At some point I hope some of the important reforms during my presidency will be recognised,” Anastasiades said.

“When the dust of elections and negativity settles, I believe that there will be recognition of the (correct) choices as well. There were of course both correct and wrong decisions. These are human,” he said.

The Anastasiades government has come under fire from opposition candidates in the run up to the February 2023 presidential elections.

Commenting on the public service commission (Edy), Anastasiades commended their work saying it has been improved, and reactions to decisions on hiring have been reduced, as hiring requirements have been based on meritocracy and interviews.

Handing over the report for 2021, Edy head George Papageorgiou said in that year there were two significant developments at the commission – the pandemic and the fact that in July, 2021 the new commission took over and increased output.

Papageorgiou thanked the president for the trust he puts in Edy, noting that “we tried and are trying to adequately respond to the very difficult task we are trying to carry out.

“Thanks to your own political will Mr President, in 2021 the debate on the reform of the civil service was completed, it was voted at the beginning of the year and now we have a great challenge before us to implement this reform that will ensure more transparency and objective criteria,” he said.

Later, Papageorgiou said the commission’s goal is to hire people to the civil service that meet the appropriate criteria.

“The goal of the commission is to provide high-quality service, transparently and with respect to citizens,” he said.

Meanwhile, the Cyprus statistical service (Cystat) announced on Tuesday that since the beginning of this year employment in the civil service rose by 0.4 per cent over the previous year.

Cystat said that 782 permanent staffers left the civil service, meaning the total number of permanent staff is now 25,610, down from 26,392 a year ago.