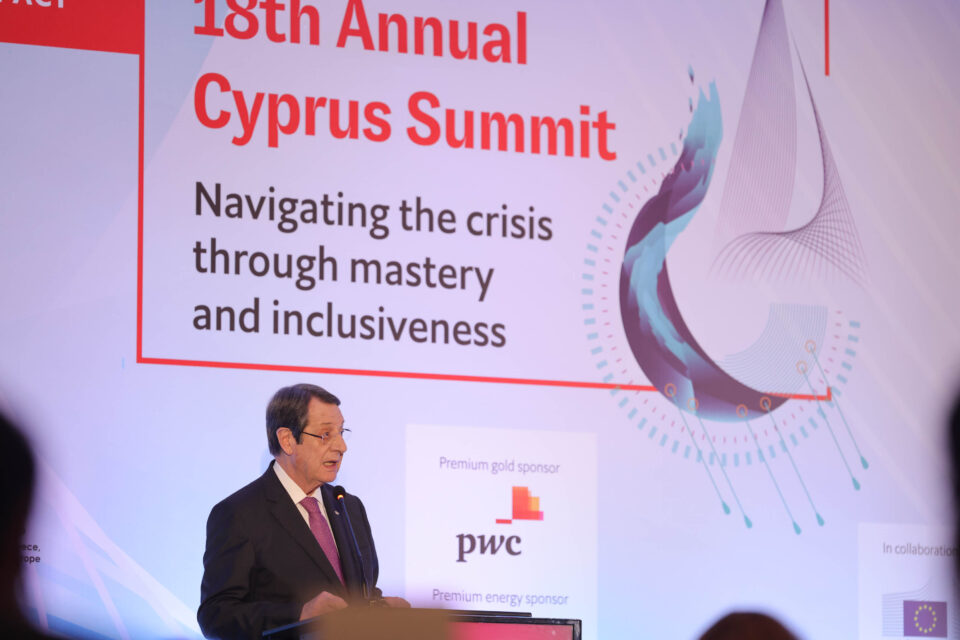 The Cyprus economy is expected to grow by 5.7 per cent this year, President Nicos Anastasiades said on Tuesday addressing The Economist conference in Nicosia.

Anastasiades added that public finances are set to return to a surplus of at least €350 million in 2023.

The president also said he will recommend to the Council of Ministers to proceed with a relevant decision so that from November 1 any new demands that significantly derail the state budget are not to be accepted.

“Demands which are justified and do not negatively affect the state budget or plans, will certainly be examined as will any new measures to support citizens, especially the vulnerable groups due to the energy crisis and inflation,” he clarified.

Titled ‘Navigating the crisis through mastery and inclusiveness’, the two -day summit will explore priorities for the Cypriot economy as well as conditions for the resumption of peace talks.

“The unemployment rate is decreasing. It is expected to fluctuate slightly below 7 per cent of the labour force and, according to predictions, it will drop to 6.4 per cent next year,” Anastasiades added.

Furthermore, Anastasiades added that inflation is expected to rise to 5.2 per cent, which is significantly lower than the EU average, estimated at 6.8 per cent.

“Rating agencies continue to upgrade the long-term and short-term credit rating of Cyprus, which is a token of the sound economic policy of the government.

“Prudent fiscal policy in times of stability is a necessary condition for making decisions to support businesses, employers and, most importantly, the vulnerable citizens in times of need, without, at the same time, jeopardising the state’s access to funding or downgrading its credibility,” the President said, explaining that the state had given financial support during the pandemic totalling €3 billion.

“The policy also enabled the government to submit a state budget for 2023 with an increased budget of €500 million compared to 2022, with increased development spending of 12 per cent and increased spending on social protection of 4 per cent.”

Referring to the state budget, he said that when he took over in 2013, cash reserves were enough for one month’s public expenditure.

“In essence, we were at the stage of bankruptcy, with 17 per cent unemployment, negative growth rates and a ‘junk’ economy that could not borrow from international markets,” Anastasiades said.

“It was our responsibility to deliver a robust economy, with surplus budgets and growth rates, significantly reduced unemployment, despite the crisis.

“And it is this same sense of responsibility that does not allow us now, five months before handing over the governance, to make moves that would derail the fiscal policy and put the credibility of our economic policy in question,” he concluded.