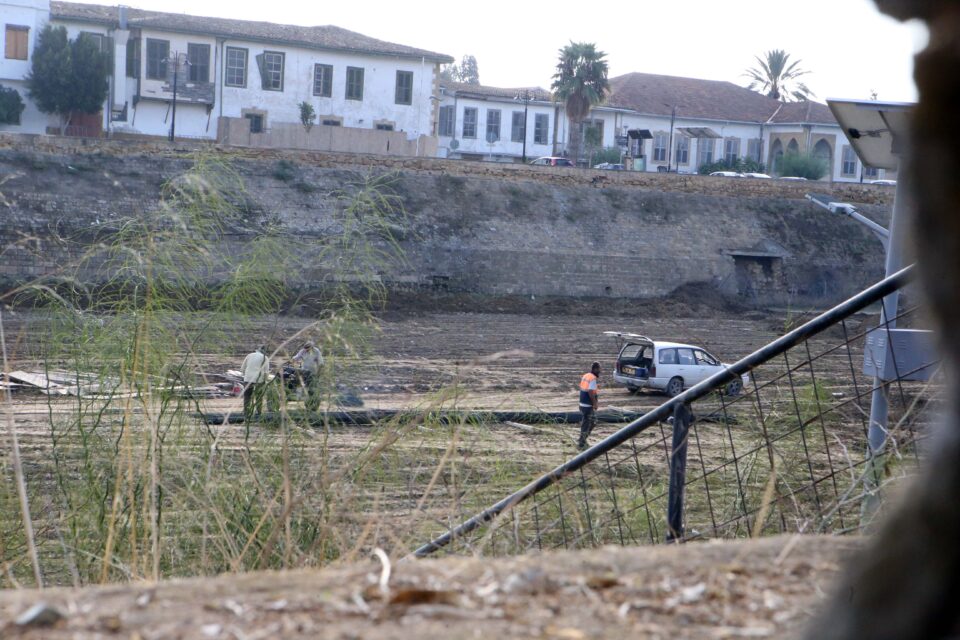 Works at the stadium on Friday (Christos Theodorides)

Foreign Minister Ioannis Kasoulides had a “strong and stern” phone conversation with Unficyp head Colin Stewart on Friday, over the works that were agreed with the north to be conducted on Cetinkaya stadium in the buffer zone.

Works began earlier in the week, after an agreement was struck between Unficyp, the Turkish Cypriot side and Turkey.

The ministry said in a statement that Kasoulides “expressed his intense uneasiness on our side for the way Mr Stewart and Unficyp handle their mandate in Cyprus, in a way that creates complications and problems mainly to the detriment of our side.”

He referred to specific examples taking place along the ceasefire line, in the area of Pyla as well as within the enclosed area of Varosha.

On the issue of the works at Cetinkaya stadium, the minister asked Stewart for the immediate suspension of the ongoing works, so that there could be a consultation with the government and to explain the rationale that led Unficyp to granting a work permit without the consent of the Republic of Cyprus.

“The minister of foreign affairs clarified to Mr Stewart that the Republic of Cyprus will not tolerate anyone misunderstanding and perceiving as weakness the constructive disposition of our side, which made sincere efforts to build a climate of trust between the two communities,” the ministry said.

He recommended that they “avoid actions that could be exploited by the Turkish Cypriots to upgrade the breakaway regime,” the announcement said.

Earlier in the week, works started on the stadium, with the ‘foreign minister’ Tahsin Ertugruloglu announcing the renovations would be carried out by with funds from Turkey, and following consultations with Unficyp.

On Wednesday Unficyp spokesperson Aleem Siddique told the Cyprus News Agency that any suggestion that the status of Cetinkaya pitch ‘Taksim’ has changed, was wrong and misleading.

Siddique also said that “the site would be used for football practice only, as it has been used in the past, with strict regulations in place to manage its use and protect its status within the buffer zone.”

The area remains inside the buffer zone, under the control of Unficyp, he noted commenting on reports in the media concerning the works by ‘youth and sports ministry’.

Two years ago however, the Unficyp had failed to deter the Turkish army from harassing Greek Cypriot workers conducting renovations works at the derelict Spitfire Coffeeshop at Paphos gate, also within the buffer zone and close to the stadium.

“Unfortunately, because of the continuous harassment from the Turkish occupation army, we are forced to withdraw the crews from the area and suspend work,” the Nicosia municipality had said in a statement on its Facebook page at the time.

“We are sorry because the UN, despite discussions we held in the past one and a half years, have not managed to provide our contractor’s crews the necessary protection to continue the necessary work to prevent collapse of the building.”

Eventually the municipality was allowed to finish works to shore up the building following a back and forth with the UN over the matter.