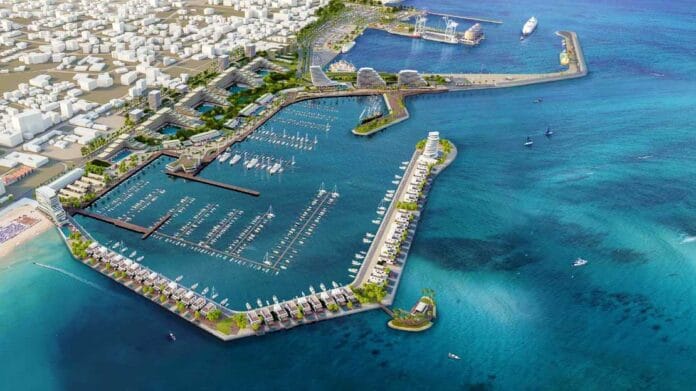 Part of the new Larnaca marina, a €1.2 billion project, will open to the public on October 28, the municipality confirmed on Wednesday.

On Tuesday night, the upgraded section was inaugurated in the presence of Transport Minister Yiannis Karousos and other city officials.

The municipality confirmed to the Cyprus Mail that only a section would be opening to the public on October 28, and that construction works for the entire project would most likely be in full swing in two months.

At the ceremony, Karousos said that the €1.2 billion plan to upgrade an integrated port-marina in Larnaca is moving forward, after the investor decided to proceed with implementing the plan.

“As the Ministry of Transport, I am proud of what we have achieved for Larnaca, including the major development of the port and marina, which is a project that will greatly change the city, while the redevelopment of the marina in particular will provide many experiences,” he said.

Karousos said that the €1.2 billion investment is the biggest in Cyprus at the moment.

“We are very pleased to see that the investor is proceeding with the implementation of the contract,” the minister said.

He added that among the projects completed in Larnaca are the archaeological museum and the upgrading of the Larnaca-Dhekelia road, a project that the local community has been requesting for decades.

He said the ministry had also done its bit to move oil reservoirs from the coastal front so that Larnaca would also have excellent prospect for development.

“A few days ago, we discussed with the city’s mayor various issues such as the creation of breakwaters to deal with the erosion that exists so that beaches and a proper coastal front can be created,” he added.

Also speaking at the ceremony on Tuesday night, Panos Alexandrou, CEO of Kition Ocean Holdings, the company responsible for the project, said the implementation of the project was an historic day.

During the opening on the 28th visitors will have the opportunity to see how the marina has been shaped since April 1, 2022, the date of activation of the agreement of the Republic of Cyprus with Kition Ocean Holdings.

“In the marina there will be a modern Greek-style fish restaurant, a canteen with street food and snacks, a small children’s playground/amusement park, service offices, sales of boats and marine items and a market that will bear the name ‘Marina Market’, which will permanently host nine small houses with local businesses that will have products, food and drink, while on special occasions such as Christmas, festivals and other events it will also host other activities.”

A mosaic of culture and history

Money-saving hacks for beauty on a budget