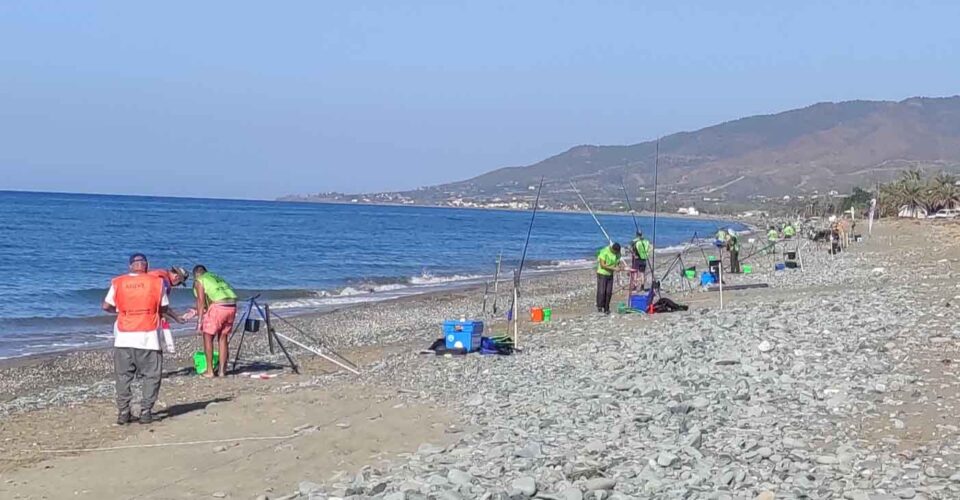 The international confederation of sport fishing (FISP-M) is holding its 2022 seashore angling championship in Paphos this year. It is the first time Cyprus has been chosen as a location for the event.

Michalis Michaelides, head of the Cypriot Sport Fishing Federation told the Cyprus Mail that originally the event was slated to take place at Lady’s Mile beach in Limassol, however, British bases authorities did not grant permission for it, citing the fact that the beach is still being frequented by bathers.

Shore angling, which is an officially registered sport with the Cypriot athletics association, Koa, has had an organised presence on the island since 2020. Clubs from eight countries are represented in the event currently taking place: Belgium, France, Germany, Italy, the Netherlands, Spain, Portugal and Cyprus.

The normally low-key Argaka beach was deemed an ideal location (after Lady’s Mile), as a long, uninterrupted stretch of accessible shoreline was needed to lay down the strings marking out the so-called ‘boxes’ from which the anglers –totaling over 100—fish, cordoning off 2km of the 7km beach.

The competition lasts one week but some participants arrive a week early in order to familiarise themselves with the terrain and practice. The starting time is 12 pm sharp and the fishing lasts four hours daily.

Participant Marc Vandervalle said he has been involved in the sport for 26 years. Asked what attracts him to it, he said he started off fishing with his grandfather in lakes and rivers in his native Belgium and enjoys the relaxing quality of the activity and the pleasure of being near the sea. The Belgian team said they loved Cyprus, however, the fish being caught here were very small in size compared to other locations.

Marco Montieri, competing for Germany, mentioned he enjoyed meeting people from different countries and learning about different fish species. Asked if he did not feel sorry for the fish, Montieri explained that this type of fishing employs “catch-and-release” and that the hooks used to catch the fish are harmless. They are also designed to disintegrate rapidly if they end up in the sea, he said. In his native Germany, strict environmental laws prohibit sports fishing altogether, he added, and only two fish species may legally be caught for food.

So how is the winner determined? The fish are taken out of each contestant’s water-filled collection bucket and measured, with points awarded according to size. Fish smaller than 12cm long are worth 1 point and it goes up from there.

Asked whether they consider their sport ecologically sustainable, especially since it is taking place at a beach well-known as a turtle nesting site and considering the well-known problem of fish stock depletion in the Mediterranean, members of the Cypriot club were emphatic that catch-and-release fishers, in particular, respect and protect the environment.

“We start every event with a beach clean-up and leave not one speck behind,” one member said, adding that nets, commercial fishing and plastics do far more damage.

“As do invasive species,” another chimed in.

“Our event this year has been great for this particular community,” a third member added, saying that they had spoken at the village primary school and brought patronage of local eateries to the surrounding area.

Even though no paid licensing is required from the fisheries department for competitive shore angling, permission was sought, and the data on fish specimens collected by the organisers is shared with the government authority for research purposes.

Further information about the sport and upcoming events can be obtained from the Cypriot club’s Facebook page at https://www.facebook.com/CyprusFederationSportsFishingsea/.

2023 Rhapsody of the Seas cruises from Limassol on sale

Anastasiades refuses to be drawn on support for election candidate