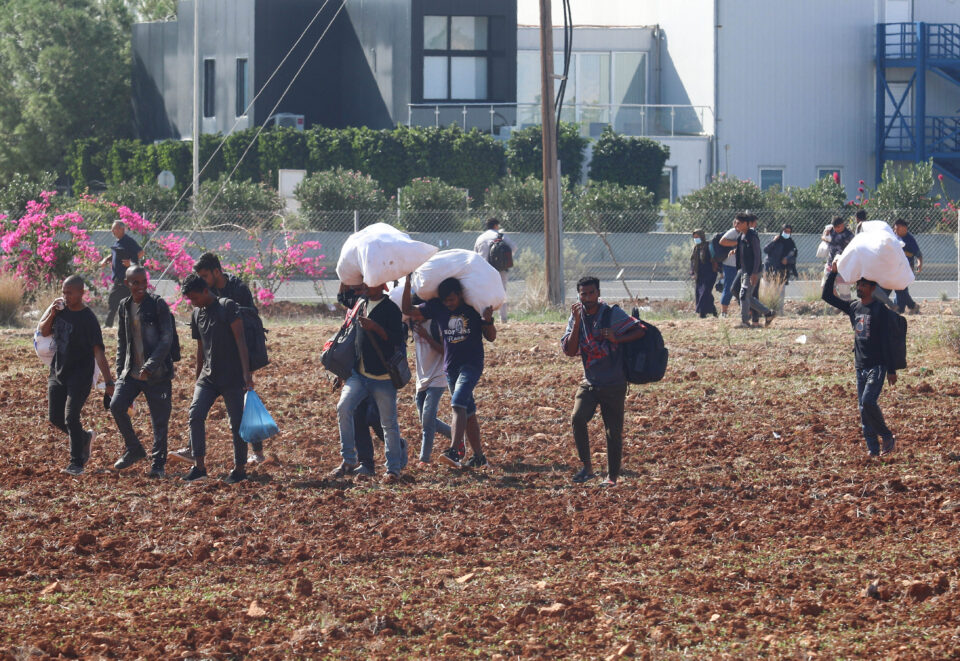 The interior ministry plans to deport the asylum seekers involved in recent clashes at the overcrowded Pournara reception centre during which fires injured residents and security guards and destroyed equipment.

The news came as police continue to look for the five instigators in Friday’s clashes.

Speaking after his visit on site on Saturday, Interior Minister Nicos Nouris said efforts are being made to identify those involved in the fight so they can be deported while additional fencing will be installed.

The photographs of 160 people of those residing in the camp were given to the police, who will check through CCTV material to see whether they were involved in the incidents. Whoever is identified will be arrested and the process for their immediate deportation will begin, Nouris said.

“A message must be sent to those who are causing these problems, because they cannot be hosted in our country, under any circumstances,” the minister said.

“We are constantly called upon to resolve disputes between different nationalities.”

The scuffle that broke out at 11am on Friday was a dispute between Nigerians and Congolese over whose turn it was to charge their mobile phones, Nouris said, confirming that this was caused due to overcrowding.

Nouris, who met with the head of the camp, said the 15 tents which were burnt by the fire will be restored.

The minister, who also met with the local authorities, highlighted the need to intensify security and patrols by the police in the area.

He said that efforts would be made to speed up the completion of the new fencing, a project costing €1.2 million, which was scheduled to start in two to three weeks.

The aim is to have double fencing at the centre.

The project was scheduled to be completed in March, but following the latest developments, Nouris said he would be in contact “with all the departments involved, including the auditor general of the Republic, so that we can speed up the implementation of the project in a concrete way”.

“A number of people [from outside the camp] who seem to be involved in the incidents and it seems that there is also trafficking of various materials with those staying inside”, Nouris said.

He said he will proceed to hold meetings with various agencies involved to address the phenomenon.

Clashes started at around 11am on Friday between two groups at the overcrowded reception centre. Residents lit fires at different parts of the facility which injured 20 residents and two security guards. Some 24 fabric tents were damaged.

Meanwhile, most people who fled the facility due to the troubles after fires were lit, have returned, police spokesman Christos Andreou told radio Trito on Saturday morning.

Due to the ongoing problems and frequent fights that break out in the facility, Andreou said police have strengthen their presence in the area and increased patrols.

He added further strengthening of the policing is expected in early 2023 with newly recruited officers.

However, police’s branch of Isotita union blamed the incident on the bad planning of other services and reiterated their demand to move the mobile police quarters from the camp.

“The situation has gotten out of hand in Pournara because plans failed long ago,” the branch said, explaining those plans are a responsibility of other agencies and not the police.

“Police are not responsible for what happens inside the camp,” it added.

The branch had sent an emergency letter to the Nicosia police chief regarding their relocation demand in January, explaining that in case of clashes or a fire, officers lack the visual field to act.

“The six officers who are sent to guard 2,000 migrants should not be treated as second class citizens,” the letter said.

On Friday, Police Chief Stelios Papatheodorou said the clashes broke out due to the migrant centre’s overcrowding. Pournara has been hosting well over its 1,000 person capacity as Cyprus struggles to cope with an influx of asylum seekers from Syria and from African countries.

Meanwhile, Kokkinotrimithia community leader Christakis Meleties told the state radio station he requested a private meeting with President Nicos Anastasiades whom he expects to intervene to resolve the issue caused by the large influx of migrants.

“The community cannot bear the cost of the migration issue,” he said.