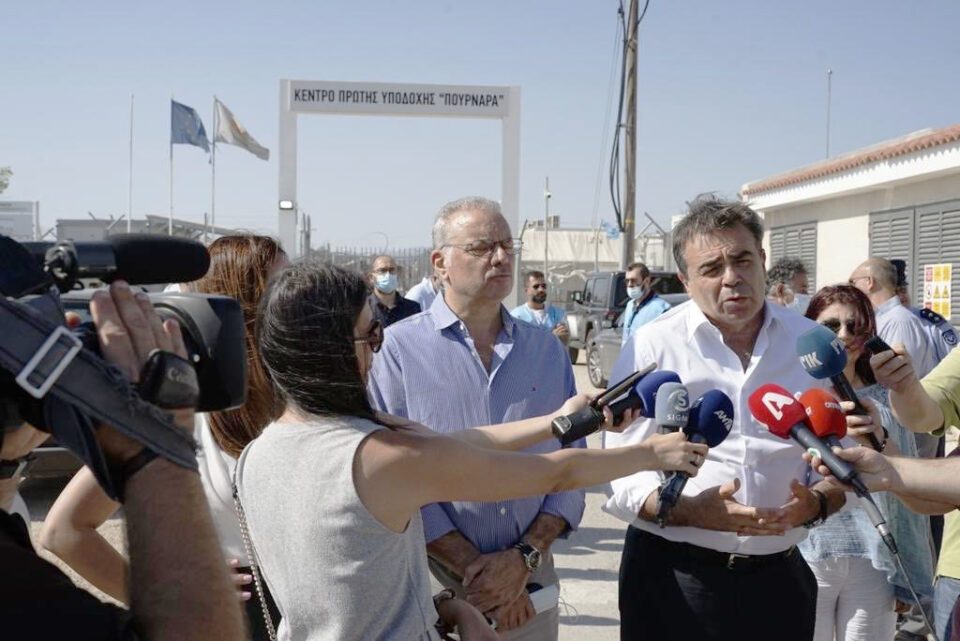 Interior Minister Nicos Nouris at a previous visit to Pournara

NGOs on Friday accused Interior Minister Nicos Nouris of cultivating fear and racism after comments he made the previous day on the number of migrants in Pournara with HIV and TB.

“We believe that HIV infection cannot be used as a tool to cultivate fear and racism. We call on the honorable minister to apologise immediately and publicly for his statements and for the serious adverse impact they have caused,” a statement issued by the AIDS Support Movement, Generation for Change, Cyprus Family Planning Association and the Cyprus Refugee Council said.

“This rhetoric can only be described as unacceptable as it perpetuates and contributes to xenophobia and racism, while stigmatising groups of people who are already in a position of vulnerability, as well as people with chronic illnesses,” they added.

On Thursday Nouris had said 1,100 at the migrant reception centre had HIV and 800 tuberculosis.

Later on Thursday, the interior ministry clarified the statements, saying he had meant “neither 1,100 AIDS cases are currently living at the centre nor 800 TB patients.”

The number, reportedly provided by the centre, appear to reflect those recorded over a period of time, about 12 months.

The NGOs also said the numbers mentioned by the minister are greatly exaggerated.

“According to data collected by the European Centre for Disease Control (ECDC), in the past two years, the number of new HIV cases recorded in Cyprus was estimated between 150 to 170 annually,” they said.

They also attempted to put HIV in a different light. “In the case of HIV, we have known for around 30 years that the illness cannot be transmitted through social contact, and sharing the same domestic appliances.”

The statement finally urged the interior ministry to take the vulnerability of the people living in Pournara very seriously and to avoid taking actions that might contribute to their further stigmatisation and marginalisation.

The statement was quickly backed up by opposition party Akel, which called Nouris’ comments on the issue “irresponsible and dangerous.”

“Not only, as the interior minister, is he responsible for the situation in Pournara, but he continues to instrumentalise fear in our society,” the party said.

“Yesterday’s fiasco is a perfect example of how the minister and the government in general are managing the immigration issue.

“Toxic xenophobic rhetoric and public lies are not the right solution. Immigration is a serious topic and needs a minister who is, first and foremost, serious and responsible.”

Replying to Akel, the interior ministry later said: “It does not accept lessons in migration management from those with an open border policy as their slogan.”

“Akel is overlooking the fact that for the first time ever, concrete measures are being taken to tackle illegal crossings,” an interior ministry’s statement said adding that under the current administration asylum examination procedures became faster and judicial procedures were strengthened.

“We then ask ourselves, who is irresponsible after all? Those willing to protect the country from increasing migratory flows that are overwhelming the country or those who overlook the real root of the issue so that they can serve their petty political agendas?”

“It is not enough that the interior minister lied about the issue on Thursday, he continued doing so today when he said that Akel supposedly supports an open border policy.

“Perhaps he believes that by lying he will escape the failures of his immigration policies. When xenophobia meets incompetence, these are the results,” Koukoumas said.

Woman wanted for abduction of minor