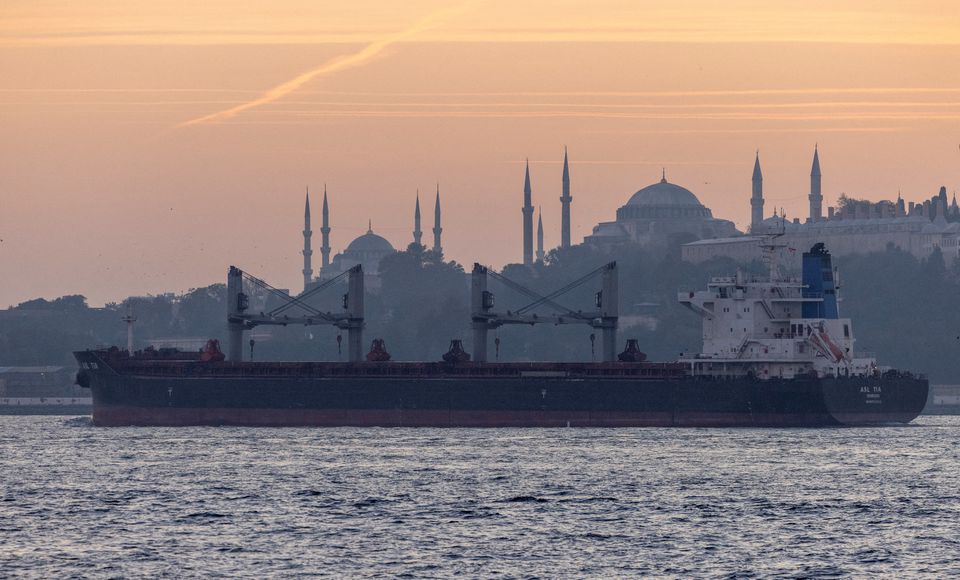 Russia wants the West to ease restrictions on state agriculture lender Rosselkhozbank to facilitate Russian grain exports, according to four sources familiar with the request, made during talks to extend a deal on food shipments from Ukraine.

Moscow suspended its participation in the secure Black Sea grain corridor in late October but rejoined after four days, easing fears of further disruptions to grain exports from key supplier Ukraine at a time of rampant global food inflation.

President Vladimir Putin has reserved Russia’s right to halt the United Nations-brokered agreement again, while UN chief Antonio Guterres is pushing Moscow to agree to extend the pact beyond its scheduled expiry on Nov. 19.

Russia has not detailed its demands publicly beyond calls to unblock Russian fertiliser stuck in European ports and warehouses and resume exports of ammonia, an important ingredient in fertiliser, through a Russia-Ukraine pipeline.

The four sources, who declined to be identified due to the sensitivity of the subject, said Russia was asking Western countries to allow state lender Rosselkhozbank to restore its relations with correspondent banks despite Western sanctions.

This would allow the bank, which has not had a major role in the international grain trade so far, to process payments for Russian grain and other foodstuffs, two of the sources added. Before the latest sanctions, such payments were handled by international banks and subsidiaries of other Russian banks in Switzerland.

The sources did not say what response, if any, Russia had got to its proposals.

Russia has said the sanctions imposed after the start of what it calls its special military operation in Ukraine make it hard for Russian grain and fertiliser traders to process payments and access vessels, insurance and ports, even though food is exempt.

Russia’s Foreign Ministry and Rosselkhozbank did not reply to a request for comment.

The UN has said it “remains committed to removing the remaining obstacles to the exports of Russian food and fertilizer”. It did not immediately respond to a request for comment on the Russian proposal.

A UN source, speaking on condition of anonymity, said facilitation of payments for Russian food and fertilizer through Rosselkhozbank is being discussed with the European Union and other parties.

Moscow has said its consent to extend the Black Sea grain deal depends on support for its own grain and fertiliser exports. Russia is a major agricultural producer and the world’s largest exporter of wheat.

Ukraine, whose shipments to global markets were blocked by the conflict and Russia’s control of Black Sea waters until July, is one of the biggest suppliers of grains, oilseeds and vegetable oils.

Russia’s resumption of the deal on Nov. 2 followed mediation from Turkey, which helped broker the agreement alongside the United Nations.

A Western diplomat briefed on the talks said Turkey had leaned heavily on Russia to stick to the deal and that Rosselkhozbank was a part of the discussions, but not directly related to Moscow’s suspension of the deal or subsequent switch.

Russia’s Foreign Ministry said in September that there was a need to remove Western sanctions from Rosselkhozbank, because it was “serving the lion’s share of all fertiliser and food transactions”.

Swiss banks which traditionally handled the trade have kept their distance since the latest Western sanctions were imposed after Russia invaded Ukraine in February. Before the Ukraine crisis, Rosselkhozbank mainly provided loans to Russian farmers.

Dmitry Patrushev, son of Russian Security Council Secretary and Putin ally Nikolai Patrushev, was the bank’s management board chairman from 2010-2018, and is now Russia’s agriculture minister.

The bank and both Patrushev family members are subject to Western sanctions.

The Agriculture Ministry and its head, Dmitry Patrushev, did not respond to a Reuters request for comment.

The Russian Union of Grain Exporters has proposed that the agriculture ministry include a more detailed plan for Rosselkhozbank in Russia’s list of requests during negotiations, Eduard Zernin, head of the association, told Reuters.

“We propose that the US and the EU assign one authorised correspondent bank each for Rosselkhozbank to settle payments for grain and other agriculture products, as well as trade finance transactions, including bid and performance bonds,” Zernin said, referring to deals to protect buyers and sellers.

The association is also ready to prepare lists of Russian and international exporters to simplify compliance controls by such correspondent banks, he added.

Pega delegation ‘left with more questions than when they arrived’