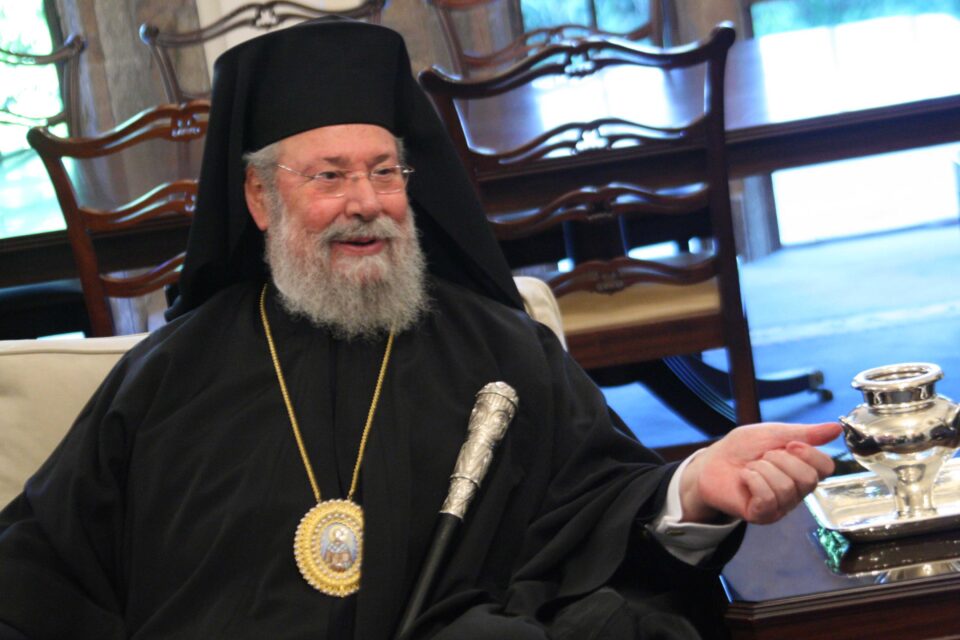 Archbishop Chrysostomos II, head of the Autocephalous Church of Cyprus has died aged 81 after a long battle with cancer.

According to an announcement from his doctors, the Archbishop passed away peacefully at 6.40am on Monday. The statement was signed by Iosif Kassios, Dimitris Papamichael, Petros Agathangelou and Michalis Protopapas.

“The Archbishop fell peacefully asleep after facing the test of his illness with courage, patience and Christian determination,” the statement said.

“What those of us who were close to him experienced during the difficult hours of his illness, was his humility, the kindness of his soul and his profound faith as well as his concern for his flock.

“He leaves behind a work characterised by foresight, boldness, highlighting and respecting and restoring the Church’s historical tradition along with innovative changes, always seeking the harmony and unity of the Church. What we will remember will always be with us, that is his honesty, kindness and smile.”

“The people of Cyprus mourn the loss of Archbishop Chrysostomos II, President Nicos Anastasiades said in a tweet. “His reform work for Orthodoxy, the Church and his action for the welfare of our people is enormous.

“On behalf of the State and myself, I personally express my sincere condolences to the Holy Clergy, our people and the family of The Archbishop.”

A session of the Holy Synod is due to convene at noon, while many government events have been cancelled.

Bishop Giorgios of Paphos, who under Church rules is the caretaker until a new election, said the priority for the Holy Synod will be the funeral for Chrysostomos and then the election. The archbishop’s body has been transferred to the Apostolos Varnavas cathedral within the grounds of the Archbishopric.

Giorgios said the Archbishop had faced his illness and impending death “with the patience of Job, letting God’s will be done”.

Health Minister Michalis Hadjipantela went to the Archbishopric and said he was there to pass his condolences on to the family. “I have nothing else to report,” he said.

House president Annita Demetriou also visited the Archbishopric. She tweeted earlier: “Until the last moment of his life, Archbishop Chrysostomos cared and worried about the Church of Cyprus and its flock. We are deeply saddened by his loss. May his memory live forever.”

Education Minister Prodromos Prodromou said the archbishop had always shown a great interest in education. “He was concerned about schools, about young people, about students,” he said on Monday.

Chrysostomos II was enthroned as Archbishop in November 2006 after a contentious election campaign. He was known to have outspoken views on many issues from how the Church was run, to the Cyprus issue. He also weighed in unabashedly on social issues like homosexuality, gay adoption rights and abortion, often causing major controversies.

He always described himself as a realist and saw no reason to seek out popularity.

Born Herodotos Demetriou on April 10, 1941 in Tala, Paphos he lost his father at the age of ten.

After finishing primary school, two years later, he became a novice at the Ayios Neophytos Monastery in Paphos from where he continued his education, graduating high school in 1963.

On November 3 that year, he was ordained by Bishop Georgios of Trimithounda and for the next five years, he was a deacon at the monastery and working there, where he picked up a flair for business dealings.

In 1968, he began tertiary studies in theology at the University of Athens, graduating in 1972. On October 19,1972, he was elected abbot at Ayios Neophytos.

In February 1978, Chrysostomos was elected Bishop of Paphos, which threw him into the public eye.

Following the retirement of Archbishop Chrysostomos I in 2006 due to Alzheimer’s, Chrysostomos was named locum tenens until his election as Archbishop on November 5, 2006. He was enthroned a week later on November 12 at St Nicholas Cathedral in Nicosia.

Cyprus initiative on climate change to be presented at COP27